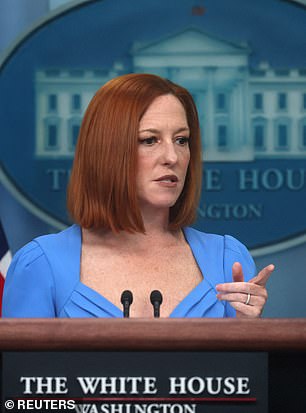 Jen Psaki will deliver her final White House press briefing on Friday after more than a year on the job as the spokesperson for President Joe Biden’s administration.

She held more briefings than all the press secretaries of the Trump administration combined and restored the daily briefing to the White House after Donald Trump prefered to serve as his own spokesperson.

Psaki became known for her calm, cool manner and her deft zingers – many of which were aimed at Fox News’ Peter Doocy. The two served as frequent sparring partners with Doocy grilling her on Biden’s son Hunter, the response to the covid pandemic, the migration problem at the border and other topics.

But she said she’ll miss the back-and-forth of the briefing.

‘I will miss him,’ Psaki said of Doocy on Thursday at a breakfast sponsored by the Christian Science Monitor.

‘I think we have a very good professional relationship,’ she said.

Psaki had to defend herself last month after she was asked on a podcast Doocy was a ‘stupid son of a b***h’ or just played one on TV.

‘He works for a network that provides people with questions that, nothing personal to any individual including Peter Doocy, but might make anyone sound like a stupid son of a b***h,’ she had said.

Biden was caught on a hot mic earlier this calling Doocy a ‘stupid son of a bitch’ after Doocy had asked a question about the political liability of record inflation rates since Biden became president.

He later called Doocy to apologize.

But Psaki said Thursday the Biden administration was not ‘focused here on a fight with Fox.’

‘We have healthy debates and discussions. Doesn’t mean I agree with his line of questioning on most days,’ she said of Doocy.

When the White House announced earlier this month Psaki would depart on May 13, Doocy told her in that day’s briefing: ‘Sorry to see you go!’

‘Are you?’ she responded, garnering laughs.

‘Yes, and you’ve really been a good sport,’ Doocy said.