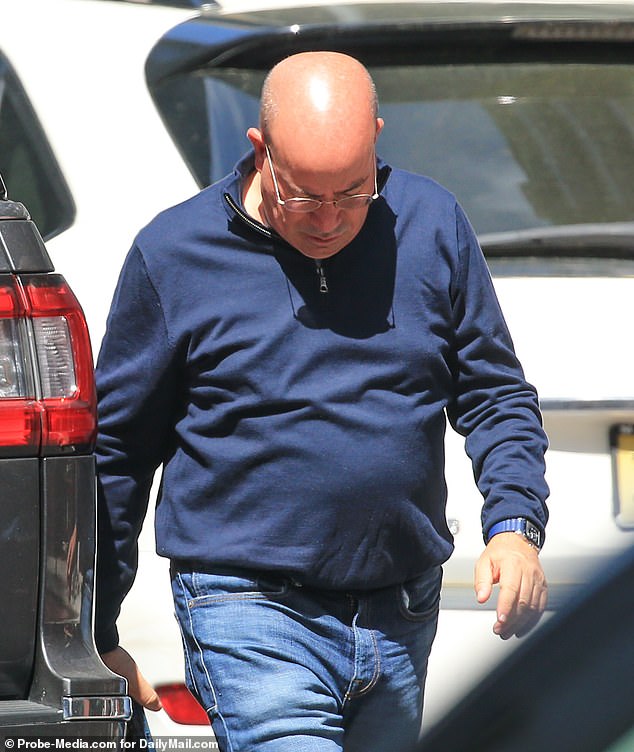 Ousted CNN president Jeff Zucker, 57, was seen out and about in New York City – three months after his resignation from the media network in early February.

Zucker was seen exiting his Upper East Side apartment before heading to a Chase Bank ATM. From there he strolled a block and walked in the front door of a building, where he could be seen talking to the front desk.

Zucker has been elusive since his resignation from CNN on February 2, where he had been president since 2013.

He left the $6million-a-year post after admitting to employees that he violated the company’s Standards of Business Conduct when he failed to disclose a ‘consensual relationship’ with Allison Gollust, 49, the executive vice president and chief marketing officer of the network.

In his resignation announcement he acknowledged he was ‘wrong’ to not disclose the relationship when it began.

On February 3, Rolling Stone reported that during the pandemic Gollust and Zucker both gave New York governor Andrew Cuomo talking points and advice on how to deal with President Trump’s criticisms of him.

Soon after, an investigation found that Gollust had also mislead CNN executives about her relationship with Zucker. Gollust resigned on February 15.

Zucker and Gollust, 49, had worked together for 20 years. They claim their relationship turned romantic during the pandemic but others say it far predates COVID.

Media sources have said the affair was an ‘open secret’ for more than 10 years – claiming even the doormen at their Manhattan apartment building tried to keep Allison and Zucker’s now ex-wife from interacting.

Zucker and Gollust lived in the same apartment building on the Upper East Side with their respective families until Jeff sold his in 2020, after he and his ex-wife Caryn Nathanson split.

Zucker and his wife split in 2018, and Gollust is understood to have separated from her husband, Billy Hult, around the same time, if not earlier.

Zucker resided in apartment 3W, while Gollust lived in the unit right above him.

Their secret relationship emerged when Zucker was interviewed as part of an investigation into ousted CNN anchor Chris Cuomo, who was fired as a primetime host in December.

It has since emerged that Cuomo was the one who raised Zucker and Gollusts’ affair to executives.

Cuomo’s attorneys are said to have told Jason Kilar, the CEO of WarnerMedia – which is CNN’s parent company. He then informed AT&T boss John Stankey.

Brian Stelter, the host of CNN’s ‘Reliable Sources,’ said on the show in February that everyone at the media company was ‘lawyered up’ following the ousting of Zucker, Gollust, and Cuomo.

Turmoil has continued to rock CNN, culminating in the catastrophic cancelling of the network’s $300 million streaming service, CNN+, after just three weeks in April. During his tenure at CNN, Zucker had negotiated pumping $1billion into CNN+ over four years.

A critic on Twitter aptly declared the fiasco ‘the biggest flop in the history of broadcasting.’

The $300million startup service was unveiled to huge fanfare – and a glitzy New York City launch party – but drew in a pathetic 150,000 subscribers.

It was previously reported executives thought its growth rate could have competed with the Wall Street Journal and the Washington Post at up to 2.9million.

Critics mocked CNN for shutting down the streaming service so quickly, with one asking: ‘Wait… there was a CNN+?’

Donald Trump released a statement ‘congratulating’ CNN for ‘their decision to immediately FOLD for a lack of ratings, or viewers in any way, shape, or form’.

CNN’s new president, Chris Licht, took up the post in early May and pledged to dedicate the network to ‘truth.’

Too many people have lost trust in the news media,’ he said in a statement to CNN employees, ‘I think we can be a beacon in regaining that trust by being an organization that exemplifies the best characteristics of journalism: fearlessly speaking truth to power, challenging the status quo, questioning ‘group-think, and educating viewers and readers with straightforward facts and insightful commentary, while always being respectful of differing viewpoints.’ Licht said.

‘First and foremost, we should, and we will be advocates for the truth.’