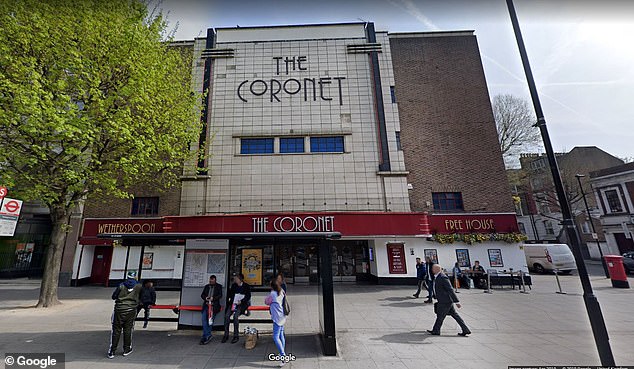 Just weeks after announcing the sale of 32 pubs across the nation, pub chain JD Wetherspoon has listed seven additional pubs for sale.

The Coronet in Holloway, the Cross Keys in Peebles, the General Sir Redvers Buller in Crediton, the Lord Arthur Lee in Fareham, the Plough & Harrow in Hammersmith, the Saltoun Inn in Fraserburgh, and the Thomas Leaper in Derby face imminent closure.

A spokeswoman stated today that the pubs will remain operating under the Wetherspoon brand until they are sold.

The Coronet in Holloway will be one of the pubs put up for sale. Toby Hall, Senior Director at CBRE, stated that the pubs would have “wide appeal” to a variety of purchasers.

The Coronet, formerly known as the Savoy Theatre, was designed by William Glenn and was opened in 1940. It is one of the seven pubs whose sale was disclosed today.

The Lord Arthur Lee in Fareham is one of seven currently available pubs. The Hampshire bar is named for the town’s former representative.

The Cross Keys in Peebles will also likely close due to its sale listing. According to Wetherspoon, it is the oldest pub in town, with a 1693 triangular plaque on the entrance.

The General Sir Redvers Buller is the first bar in Devon to be threatened with closure, according to Tim Martin, an Exeter-based businessman who is “cautiously optimistic” about the future.

However, regulars at the pub state that they are “extremely appalled” by the revelation.

One customer described the tavern, located on Crediton High Street and named for Victoria Cross recipient Redvers Buller, as a “valuable asset.”

Another regular inquired where they would congregate if the pub were to close: “Where would we go for our coffee breaks, let alone our beer?”

She expressed her displeasure with Tim Martin’s decision by stating, “It’s the only location to meet in town.”

Everything boils down to money, wouldn’t you say?

According to a frequent customer, the bar on Crediton’s High Street is a “valuable asset.” It is named for General Redvers Buller, who is also commemorated with a statue in Exeter’s downtown.

Customers expressed their displeasure at the pub’s sale. One woman stated, “It’s the only gathering spot in town.”

In addition, The Plough & Harrow in Hammersmith is available for sale. The site has been occupied by a pub or inn since the 15th century.

The inside of the Hammersmith pub Plough & Harrow. Regular patrons of some of the for-sale pubs have expressed “heartbreak” at the prospective closures.

Her companion concurred and said they were “devastated.” She stated, “Especially for seniors, it is a place to sit in the warmth and drink copious amounts of coffee.”

One regular patron stated that she wanted the bar to remain because it is a “very nice location” that is “family-friendly, inexpensive, and happy.”

Another regular stated that the closure of Spoons would be a “terrible thing.”

The Saltoun Inn in Aberdeenshire is a small hotel with 11 rooms and a lively bar. The inn is in the fishing village of Fraserburgh.

Formerly a bank, the four-story Georgian red brick structure was constructed on the site of the residence of the rich Leaper family. The Thomas Leaper pub is currently on the market.

“Every time I’ve entered this establishment, it’s been really crowded,” he stated. He is not an idiot, Tim Martin.

However, if I were Tim Martin, I would maintain the pub as it is and turn the second floor into apartments that will cover the pub’s expenses.

There was no indication of the site’s price, only that “bids were invited.”

A representative for JD Wetherspoon said that the seven locations will continue to operate as Wetherspoon until they are sold.

Savills and CBRE have been hired to oversee the sale of the seven properties, which include five freehold and two leasehold flats.

Toby Hall, senior director at CBRE, stated that the additional pubs will appeal to purchasers.

These extra properties are all sizable, well-located pubs with high-quality fixtures. The majority of the houses are being offered for sale for the first time in many years, which should make them appealing to both local and national purchasers.

This is in addition to the 32 pubs listed at the end of September, which included establishments in Battersea and Islington.

In September, JD Wetherspoon announced the sale of 32 pubs in the United Kingdom. As the network struggles with growing costs, it has announced that seven more pubs would be put up for sale.

In a recent update to investors, the pub chain confirmed that in the past 14 weeks it had opened one pub, sold five pubs, and earned £1.9 million.

Despite a 9.6% increase in like-for-like revenues compared to the same period last year, the company warned that costs are rising.

Tim Martin increased the price of a pint in his pub chain by 10 pence in May and 20 pence in London.

Wetherspoon operates over 800 pubs and hotels throughout the United Kingdom and Ireland.

The company reported that sales for the most recent period were closer to estimates, albeit October was a poor month.

Which Wetherspoon establishments will be sold?

The following Wetherspoon establishments are scheduled for sale:

Hammersmith and the Plough and Harrow

Moon on the Hill in Harrow

Wirral is a poem by John Masefield.