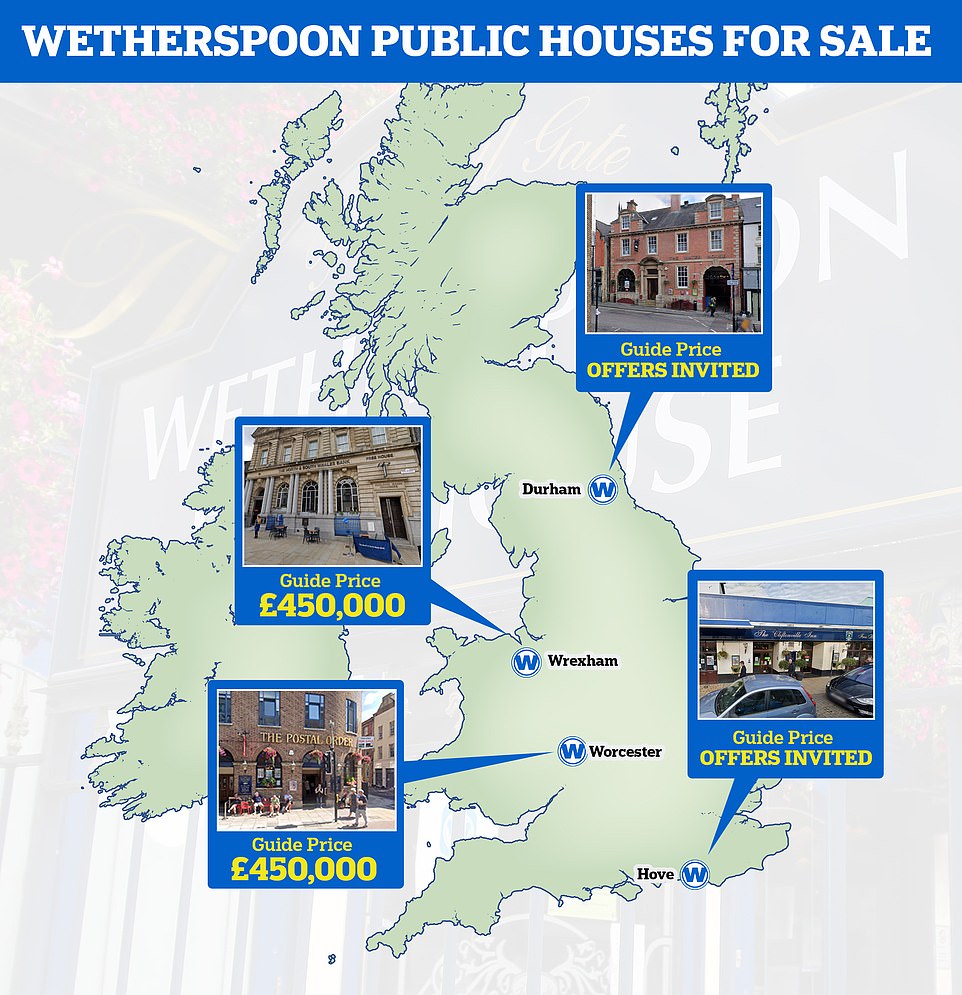 Two J D Wetherspoon pubs are on the market for £450,000, only days after the pub chain announced the sale of seven additional establishments.

The venues are far larger than the London apartments that might be acquired for comparable prices; one London studio could fit 32 times into Wrexham’s North and South Wales Bank.

The bar in Wrexham and The Postal Order in Worcester are both for sale for £450,000.

The famed student hangout The Water House in Durham and the bustling Cliftonville Inn in Hove are also available for unknown prices.

Four of the available Wetherspoon establishments have received offers. The Postal Order and The North and South Wales Bank have submitted proposals totaling £450,000. The leasehold Cliftonville Inn in Hove is also available for purchase. The freehold Water House in Durham is up for sale for an undisclosed amount.

The North and South Wales Bank, a bar located on Wrexham High Street, is for sale for £450,000. The structure was formerly a Midlands Bank (now HSBC)

If it were in Central London, the three-story, 8,696-square-foot tavern in Wrexham would cost almost £15 million based on London costs.

In addition to a cellar and storage space in the basement, the mezzanine contains the staff area and office.

Near Worcester Foregate Street station, The Postal Order was formerly a post office and Worcester’s telephone exchange. The freehold home is currently available for £450,000.

The two-story Postal Order is available for £450,000 adjacent to Worcester Gateway Station and the River Severn.

The 7,347-square-foot venue features a bar and restaurant on the ground floor, as well as a cellar and restrooms in the basement.

In comparison to the spacious drinking establishments, London apartments for the same price are far less impressive.

One apartment for sale in London for £450,000 would fit inside the 8,696 square foot North and South Wales Bank in Wrexham twenty-six times. Low ceilings and a mezzanine floor with a double bed distinguish this apartment.

A studio apartment overlooking the Thames that is so small that the bed can be pushed into the wall to provide additional space is for sale for £475,000, which is £25,000 more than the Wetherspoon pubs in Wrexham and Worcester.

One studio apartment on Gloucester Street in the heart of London has a floor area of only 334 square feet but is also for sale for £450,000.

It would fit within the North and South Wales Bank twenty-six times and the Postal Order twenty-one times.

Another apartment in a building overlooking the Thames is so small that the bed must be pushed into the wall, but it still costs a staggering £475,000.

With a surface size of 269 square feet, the studio apartment would fit 32 Wrexham Spoons and 27 Postal Orders.

The Water House in Durham has also been the subject of offers. The three-story terraced building opposite the Durham bus station contains an open-plan pub.

The red brick Water House in Durham is additionally available. The three-story, 5,238-square-foot bar is situated in a busy student neighborhood beside the Durham bus station.

The leasehold Cliftonville Inn in Hove is up for sale for an undisclosed price. The pub’s annual rent is £103,000, although this is expected to rise in 2027. In 2032, the present lease will expire.

JD Wetherspoon has hired Savills and CBRE to oversee the sale of its pubs, which include both leasehold and freehold properties.

The Cliftonville Inn in Hove is available for purchase. The leasehold property’s annual rent is currently £103,000, however it is expected to increase in February 2027.

In addition to the 32 pubs listed for sale in September, it was confirmed earlier this week that seven more had been placed up for sale.

The Coronet in Holloway, the Cross Keys in Peebles, the General Sir Redvers Buller in Crediton, the Lord Arthur Lee in Fareham, the Plough & Harrow in Hammersmith, the Saltoun Inn in Fraserburgh, and the Thomas Leaper in Derby are among the pubs presently facing closure.

A representative confirmed that the pubs will continue to operate under the Wetherspoon brand until they are sold.

The General Sir Redvers Buller is one of the pubs that were placed up for sale earlier this week. Regulars reacted with “horror” to the announcement that the High Street bar will be sold.

Regulars at the General Sir Redvers Buller in Crediton reacted with “extreme horror” to the announcement that the establishment would be auctioned.

One customer described the tavern, located on Crediton High Street and named for Victoria Cross recipient Redvers Buller, as a “valuable asset.”

Another regular inquired where they would congregate if the pub were to close: “Where would we go for our coffee breaks, let alone our beer?”

She expressed her displeasure with Tim Martin’s decision by stating, “It’s the only location to meet in town.”

Everything boils down to money, wouldn’t you say?

Which Wetherspoon establishments will be sold?

The following Wetherspoon establishments are scheduled for sale:

Hammersmith and the Plough and Harrow

Moon on the Hill in Harrow

Wirral is a poem by John Masefield.

J D Wetherspoon manages over 800 pubs in the United Kingdom and Ireland. Earlier this year, the pub company issued warnings that it faced losses of up to £30 million.

The company informed investors in a recent update that it has recently sold five pubs and launched one, generating £1.9 million.

Despite a 9.6% gain in like-for-like sales compared to the previous year, the pub chain reported greater financial strain due to rising prices and a poor month of October.

What is his name? The founder of J D Wetherspoon and pub pioneer

Tim Martin, the CEO of J.D. Wetherspoon, has recently courted controversy over Brexit and allegations of ‘abandoning’ employees during the pandemic.

Historically, though, the businessman has been hailed for his unique approach to bars and hotels.

The first Wetherspoon’s pub debuted in 1979 in Muswell Hill under the name Martin’s Free House.

A year later, it was renamed in honor of a New Zealand educator who educated a young Martin.

Martin (right), shown with Boris Johnson in 2019, was a vociferous proponent of Brexit and stated that the United Kingdom’s exit from the European Union would allow him to reduce beer costs.

Martin gained a reputation for making daring business decisions, such as prohibiting music in his pubs until 2001 and opening London’s first non-smoking bar in 1991. Smoking indoors in bars was banned in 2007.

The Thursday Curry Club was established in 1998, and according to the firm, it is the largest collective curry house in the United Kingdom.

Since 2000, the pubs opened at 7 a.m. and served breakfast and coffee.

Martin has become a more controversial figure in recent years.

In 2017, he distributed 500,000 beer mats in support of Britain’s post-fishing industry and accused Brexit experts of misleading the public.

J D Wetherspoon is no longer active on social media, as the decision was made in 2018 to shut down all online accounts.

In 2019, Martin claimed he would be able to reduce beer prices to “unbelievable lows” as a result of Britain’s exit from the EU.

Martin was criticized at the onset of the pandemic for informing Wetherspoon employees that they would not be paid until the government worked out the details of its furlough program.

He reportedly instructed his employees to work for Tesco in the interim, according to The Guardian.