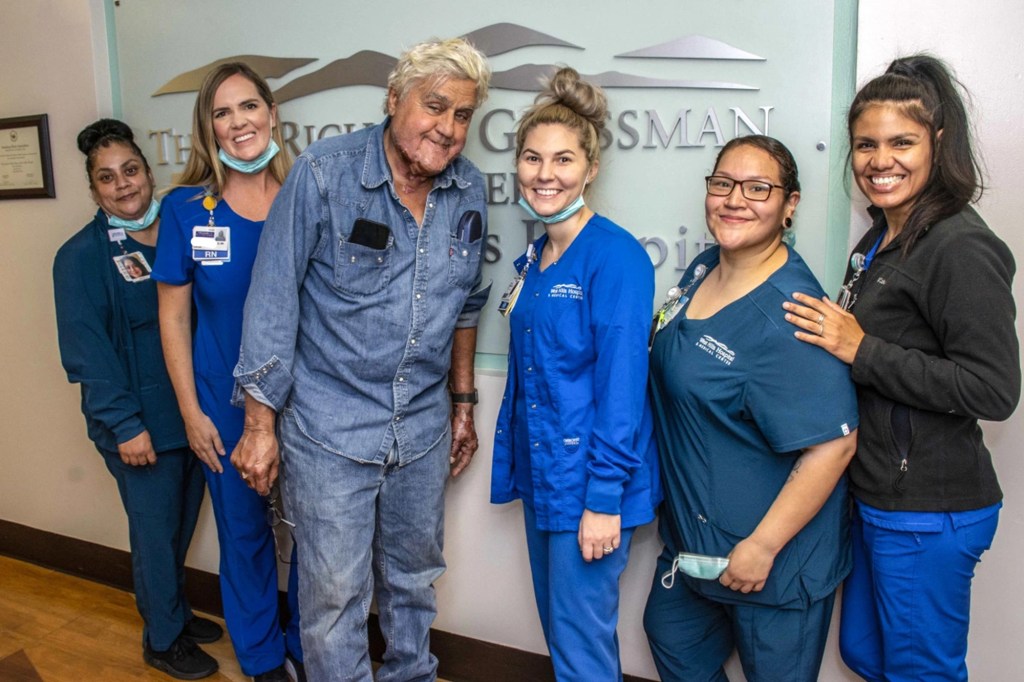 Jay Leno is energized and eager to return to the stand-up stage just days after being discharged from the Grossman Burn Center in Los Angeles.

Two weeks ago, a gasoline fire in the comedian’s garage resulted in second and third degree burns on his body.

On Sunday, he performed a show at the Comedy and Magic Club in Hermosa Beach, California, during which he made jokes about the incident.

The former talk show host said when he arrived at the event, “I never considered myself a roast comic.” Tonight, we have two shows: standard and extra crispy.

He continued, “I feel great, thanks.”

After the performance, one partygoer told NBC News that Leno “looked terrific and had a lot of stamina.”

Another source disclosed to the magazine that the “Leno’s Garage” star was “full of enthusiasm” and “told joke after joke” during his standup performance.

Leno was hospitalized to the Grossman Burn Center on November 12 after the fire left him with excruciating burns on his face, chest, and hands.

Dr. Peter Grossman, medical director of the Grossman Burn Center, said in a statement following the incident, “Some of the burns to the face are a little deeper and a little more worrying.”

He continued, “I predict his complete recovery. It is too soon to determine if this injury will leave any lingering effects. His injuries are severe, but he is in good condition.”

The hospital also issued the following statement: “Jay would like everyone to know how grateful he is for the treatment he received and for all the well wishes.”

On November 22, the comedian was photographed driving a 2002 Mercedes-Benz E55 AMG to his Burbank, California garage – the same location where the incident occurred two days earlier.

As he pulled into his garage, he joked to reporters that he “needed BBQ,” indicating that he was in good spirits.

“Hangin’ in! Leno replied to photographers who inquired about his health, “Everything is excellent – everything is great!”

Jerry Seinfeld, a close friend of Jay Leno, recently provided an update on his friend during an appearance on Jimmy Fallon’s “The Tonight Show” on November 24.

He stated, “I speak with Jay on the phone… This demonstrates how insane Jay is; he’s utterly insane. He does not seek pity. You are aware of his nature; he’s a beast. He is comparable to the football running back Marshawn Lynch.

Seinfeld then recalled how, when he inquired about Leno’s health, the “Popular Mechanics” columnist moved the subject to the weather.

The native of Brooklyn joked, “He said, ‘I’m good. I heard there was significant snowfall. Was there a great deal of snow in the east?'”

»Jay Leno laughs about being a roast comic after fire«