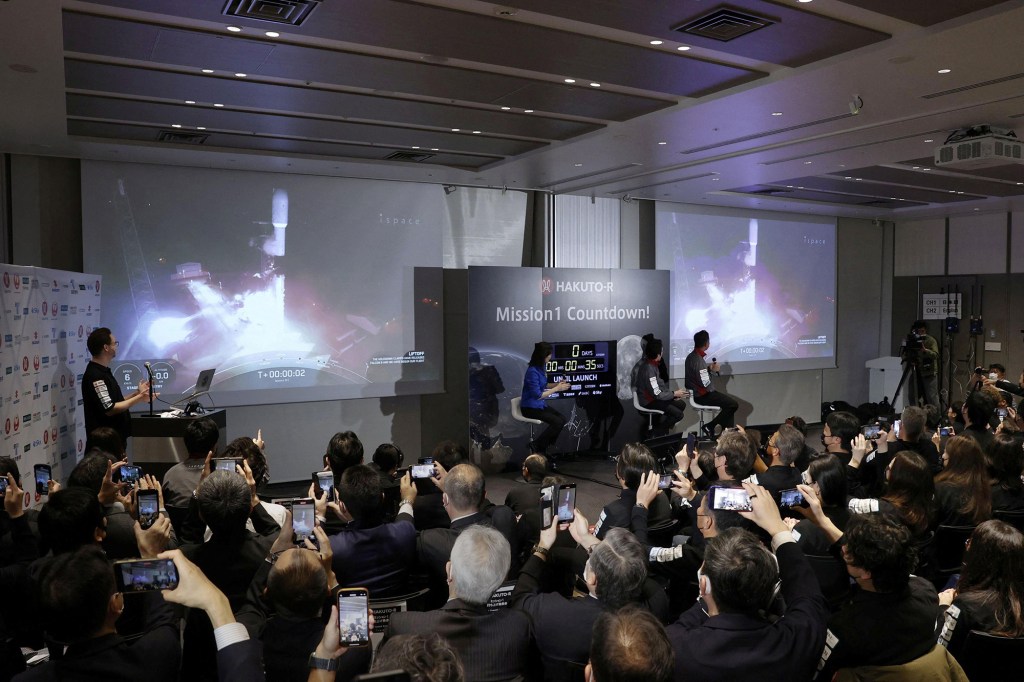 After repeated delays, a Japanese space firm launched a spacecraft to the moon on Sunday, a step toward a national and private company first.

More than a hundred guests at a watching party in Tokyo applauded wildly when the rocket launched and ascended into the night sky.

“I’m so happy. “It’s nice that we had a real launch today after numerous delays,” said Yuriko Takeda, a 28-year-old employee of an electronics business who attended the event.

“I have this image of the American flag from the Apollo landing, so even though this is just the launch, the fact that a private firm is sending a rover there is a significant step.”

Officials observe the launch of ispace Inc. aboard a SpaceX Falcon 9 rocket.

In the previous half century, the national space agencies of the United States, Russia, and China have accomplished soft landings on Earth’s nearest neighbor, but no private firms have.

Mission completion would also mark a milestone in space collaboration between Japan and the United States at a time when China is becoming more competitive and rides on Russian rockets are no longer available due to Russia’s invasion of Ukraine.

It would also be the culmination of a space-filled few days for Japan, when billionaire Yusaku Maezawa announced on Friday the eight crew members he plans to take on a SpaceX flyby of the moon as early as next year.

In contrast to the Western notion of a man on the moon, the word HAKUTO relates to the white rabbit that inhabits the moon in Japanese legend. Prior to being relaunched as a commercial endeavor, the project was a finalist for the Google Lunar XPRIZE.

The next year on the Asian calendar is the Year of the Rabbit. Late in April, the spacecraft, which was manufactured in Germany, is expected to settle on the moon.

The business expects this to be the first of many government and commercial payload deliveries. Before landing in the Atlas Crater, the ispace craft wants to place a small NASA satellite in lunar orbit to hunt for water deposits.

The M1 lander will launch two robotic rovers, a baseball-sized gadget with two wheels from Japan’s JAXA space agency and the United Arab Emirates-made Rashid explorer with four wheels. In addition, it will be equipped with an experimental solid-state battery manufactured by NGK Spark Plug Co.

A time exposure of the launch of the SpaceX Falcon 9 rocket.
AP

“Our goal is knowledge transfer, capability development, and to leave a scientific footprint in human history,” he tweeted.

Privately funded ispace has a contract with NASA to transport cargo to the moon beginning in 2025 and aims to establish a permanently inhabited lunar colony by 2040.