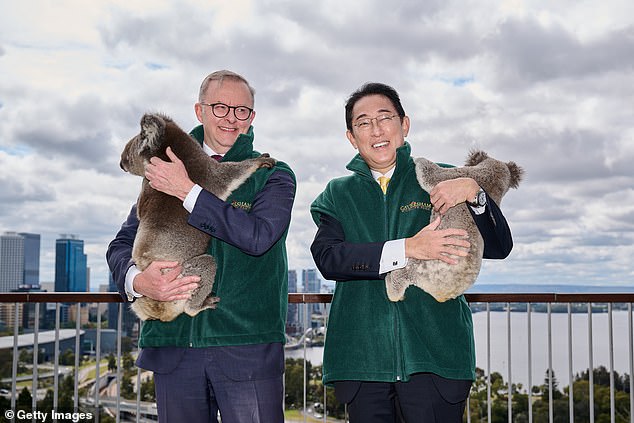 Anthony Albanese gave Japanese Prime Minister Fumio Kishida a particularly Australian greeting by holding koalas with him on his visit to Australia.

During a visit to Perth’s Kings Park on Saturday, the Australian and Japanese prime ministers cuddled up with native animals.

It was a humorous interlude in an otherwise solemn visit by the Japanese prime minister, who had come to Australia for the annual Australia-Japan Leaders Meeting.

The two nations have committed to increase Japan’s access to hydrogen, LNG, and minerals in an effort to improve energy security and jointly move toward net zero.

The two nations will also seek to assist other nations in the Indo-Pacific in their fight against climate change.

As part of an upgraded security arrangement intended to send a message to China, Japanese and Australian forces will exercise in the Top End.

Mr. Albanese began his Saturday press conference by addressing the urgency caused by the widespread flooding along the east coast and in regional communities.

He stated, “Our sympathies are with the family and friends of the five people who lost their lives in flood waters in Victoria and New South Wales.”

He stated that additional resources will be made available for rescue efforts and that families affected by the severe weather would receive financial assistance.

Mr. Albanese stated that, as of tonight, three helicopters and an additional 150 members of the Australian Defense Force will be on standby for nighttime search and rescue operations in New South Wales.

One hundred of them are located in northern New South Wales, while fifty are on standby in the Hunter. 350 ADF personnel are now on the ground in Victoria to provide assistance.

Mr. Kishida is the first Japanese prime leader to visit Australia since Shinzo Abe in 2018.

At the outset of his tour to the capital city of Western Australia, he was accorded a formal greeting.

As he went with Mr. Albanese and posed for shots with the koalas and wallabies, he appeared to be beaming.

Mr. Albanese stated, “This historic proclamation sends a powerful signal to the area regarding our strategic alignment.”

Under the terms of the agreement, the two countries agreed to conduct joint military exercises in Northern Australia and to “grow and strengthen cooperation across defense and information sharing.”

Mr. Kishida stated that the deal was a response to a “increasingly difficult strategic environment” without naming China or North Korea.

He stated, “We agreed that our special strategic collaboration had reached a new and greater level.”

Australia and Japan lack the overseas intelligence operatives and foreign informants necessary to compete in the major leagues of global espionage.

Dr. Bristow remarked, “It makes operations much smoother, and it’s vital that both Australia and Japan are US alliance allies, which increases interoperability.”

This is the fourth summit between the leaders since Mr. Albanese assumed office in May.

Additionally, the state is a major supplier of meat and grains to Japan.

In reaction to China’s expanding military power in the region, Canberra and Tokyo have strengthened their security ties.

In May, Mr. Kishida and Mr. Albanese committed to working toward a new bilateral security cooperation statement.

An earlier joint declaration emphasized security cooperation in areas like as counterterrorism and North Korea’s missile and nuclear weapons programs.

In 2014, the two nations elevated their ties to “Special Strategic Partnership.”