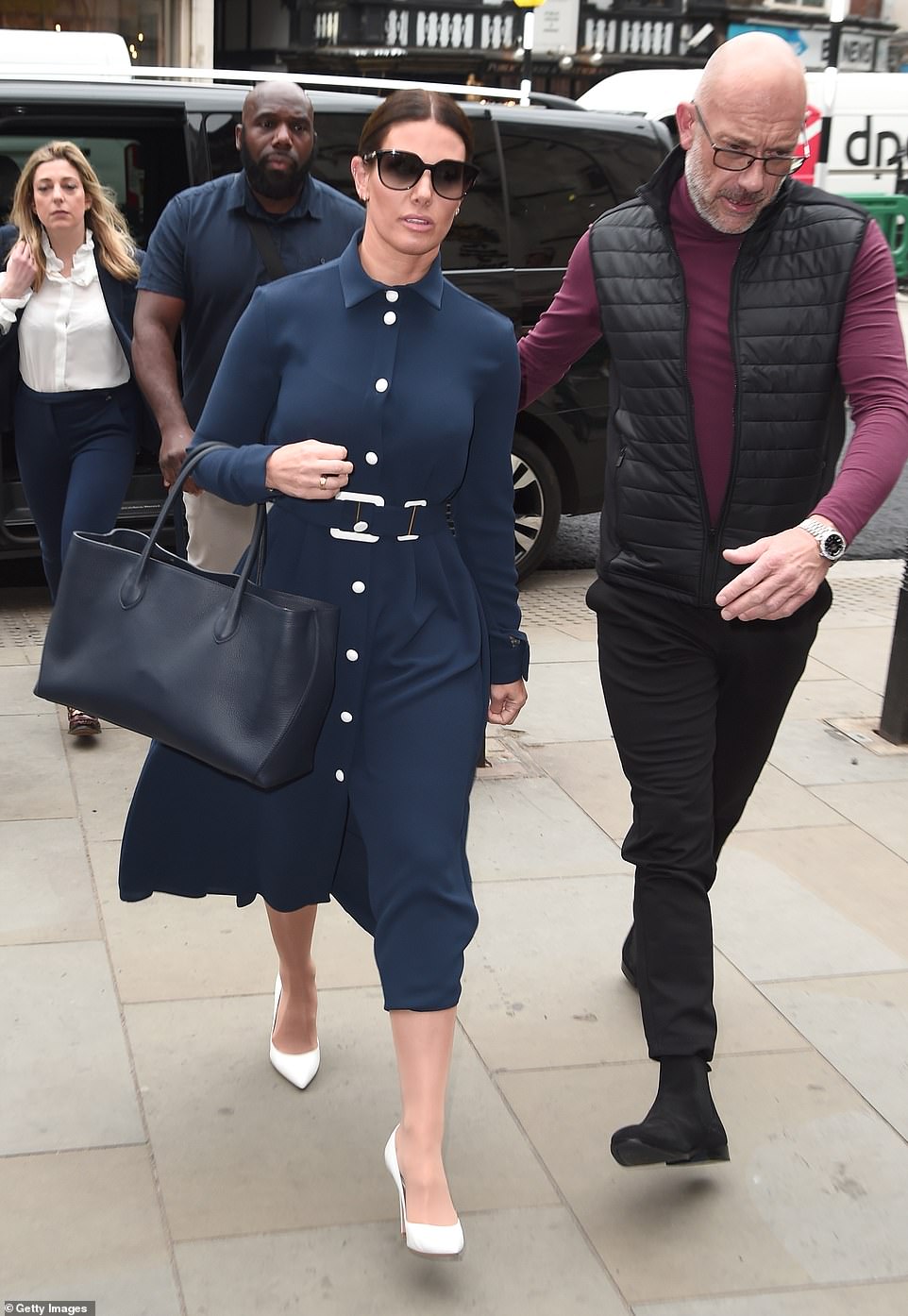 Sometimes a celebrity feud is so idiotic, juicy, frivolous and entertaining that it grabs us, perks us up, dazzles us even with its brilliant silliness.

This particular feud is The Tale of Two Wags – known alternatively as The War of the Wags, The Wagatha Christie Trial, The Great British Wag-Off and A Tale of Skulwaggery.

The libel case is unfolding in the Royal Courts of Justice this week in a fiesta of fake tan and fury – and this one has it allFor starters, it stars Coleen Rooney and Rebekah Vardy, two of Britain’s pre-eminent football Wags (which, for the benefit of anyone who’s been living in a cave since the 2006 World Cup in Germany when the term came to prominence, stands for ‘wives and girlfriends’).

Even before the two parties turned up in The Strand yesterday in their oh-so-carefully curated outfits – Coleen in black Dynasty power shoulder pads, Gucci loafer and Aircast ankle boot, and Rebekah in an unusually demure blue dress that could not quite contain her straining bosom – the pre-trial legal bills had topped £1million.

The six-day hearing is predicted to cost at least another £2million and last week someone close to the case was reported to have likened it to a ‘train heading towards a cliff edge with two passengers on board, neither of whom is willing to disembark’.

Both have heavy-hitting and extremely expensive QCs. Hugh Tomlinson QC, 68, a previous favourite of Chelsea owner Roman Abramovich and several other Russian oligarchs, is representing Rebekah Vardy. Meanwhile, David Sherborne, 53, is for Coleen. His celebrity clients have included Hugh Grant and, briefly, the Duchess of Sussex.

After a three-year build-up, it is hard to imagine anyone not au fait with the immaculately presented parties. But just in case… in the defendant’s corner is the ultimate Wag, Coleen Rooney, 36.

Coleen has been in a relationship with former Manchester United star striker Wayne Rooney since they were 16. Married for 14 years, she is mother to his four sons Kai, Klay, Kit and Cass – and forgiver of his various infidelities. Over the years, she has tried her hand at TV shows, magazine columns and fashion ranges. She now lives in a £20million mansion in Cheshire and, despite her increasingly chubby husband now being Derby County manager rather than a star player, she has somehow maintained her peak Wag status.

In the claimant’s corner is 40-year-old Rebekah Vardy, nee Nicholson, who arrived late on the football scene, but has been making up for lost time ever since.

She met Leicester City striker Jamie Vardy in 2014 when working as the party planner for his 27th birthday – at which, by his own account, Jamie and his mates behaved very badly.

Rebekah was four years his senior, twice married with two children and, following a 2001 liaison with pocket pop singer Peter Andre, had already starred in a kiss-and-tell story in the News of the World. She had described Andre’s manhood as ‘the smallest trouser equipment I have ever seen’ and likened it to ‘a miniature chipolata’.

Somehow, Vardy won Rebekah round. They welcomed baby Sofia later that year and were married in 2016. They now have six children between them and live near Grantham, Lincolnshire, in a mansion with a tennis court, gym, indoor pool, sauna and marble-topped bar.

Incidentally, Coleen and Rebekah have plenty in common – a deep love for their talented fellas, motherhood, shopping, bikinis, their own fashion brands, a raging passion for holidays in Dubai and the Caribbean and very modest upbringings. Coleen’s mum was a cleaner and her dad a bricklayer. Rebekah had a horribly tough start and was homeless when she was 15.

Happily, thanks to their husbands’ extraordinary football skills, both are now fantastically wealthy with a ridiculous number of social media followers between them.

Soon after, things got rather tricky for Coleen.

For, despite her inspired detective work and, it seemed, evidence that the leaks came from Rebekah’s account, thanks to an early court ruling, it is up to Coleen to prove they came from Rebekah herself, or with her knowledge – not just from her account or unbeknown to her, her PR manager, Caroline Watt.

To be fair, Rebekah has long been an enthusiastic self-promoter.

Soon after falling for Jamie, she employed Mrs Watt, of Front Row Partnership, to handle her PR and, as well as I’m A Celebrity, last year appeared on Dancing On Ice.

Exchanges – many with Mrs Watt via WhatsApp – disclosed in legal papers last summer revealed that at the 2018 World Cup in Russia she set up a paparazzo photographer to take a group picture of the England wives and girlfriends without bothering to inform her fellow Wags. When it was later sold to The Sun, she insisted on a tip-off fee.

Crucial court papers also revealed that, to foster relationships with particular journalists which might enhance her own coverage, she passed on titbits about other people. So there was apparently a tip-off to The Sun that Jamie’s Leicester City team-mate Danny Drinkwater had been arrested for drink-driving. And allegedly the leak of a story, published in March 2019, that an unnamed England footballer had fathered an illegitimate child.

But, sadly, at about the same time and in a stroke of exceptionally bad luck, Watt’s mobile was lost in the North Sea in an unfortunate incident involving a boat trip and a large wave. Not one of her WhatsApp messages, she claimed, was backed up on the Cloud.

At about the same time, all the media files (and back-ups) from WhatsApp conversations between Rebekah and Watt somehow vanished during the process of exporting them to solicitors. Coleen’s poor lawyers must have felt the world was against them.

Particularly when, on top of all that, they were told that a laptop apparently used by Rebekah no longer functioned, Jamie Vardy’s WhatsApp account had been ‘hacked and all conversations were deleted and could not be restored’. And a month ago Watt was decreed by a psychiatrist too ill to give evidence. Rebekah later suggested Watt could have ‘betrayed’ her by leaking the relevant stories without her knowledge.

What a bloody mess.

No wonder there’s a waiting list for tickets to watch the case unfold in court. It has now been confirmed that, along with Rebekah and his wife, Wayne Rooney will take the stand. Goodness only knows why they didn’t settle – or even try mediation, as firmly advised by their legal teams.

Or why on Earth the husbands – apparently, amazingly, still pals – didn’t just wade in and help to sort it all out.

Not least because, if the judge decides that any damage to Rebekah’s reputation is negligible, he could award her a minimal sum. Of course, we all know that money’s not an issue. Wayne Rooney’s worth at least £100million while Jamie Vardy earns £7million a year with Leicester City.

But surely, even the most publicity-hungry Wag wouldn’t want all her dirty washing aired in public? Even if it is mostly Dolce & Gabbana and Versace.