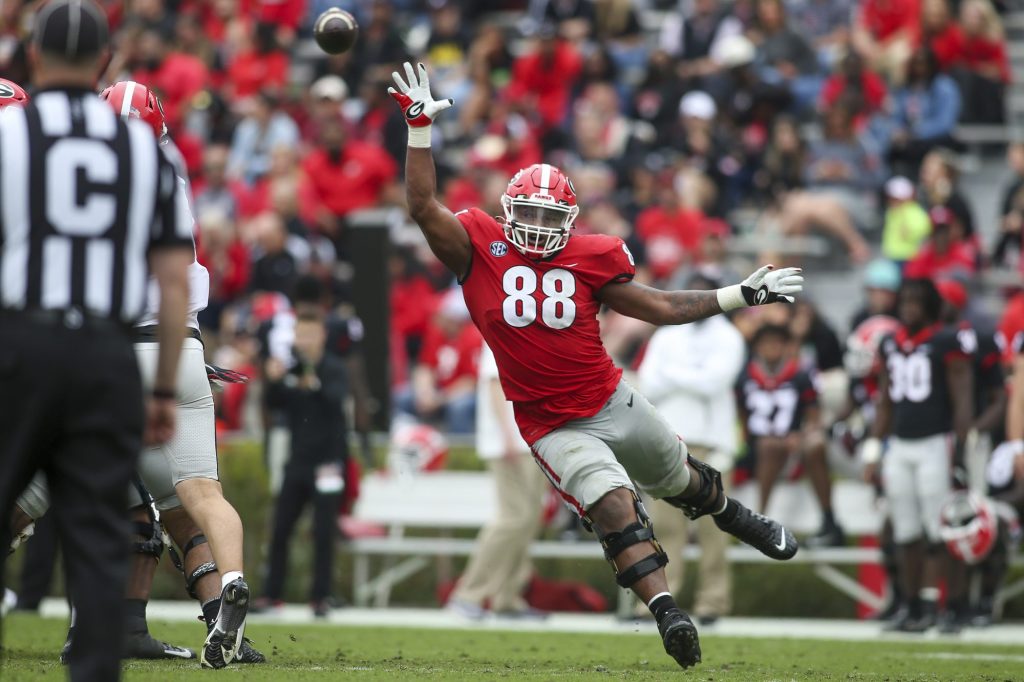 ATLANTA — Sedrick Van Pran’s reaction to the question, “What is it like to block Jalen Carter?” was straightforward and fitting.

Imagine trying to stop the 6-foot-3, 300-pound brute with everything on the line, as it will be in the Peach Bowl on Saturday night.

Words such as “nightmare” spring to mind.

It is not just Carter’s stature, speed, or strength that make him such a difficult opponent. All of these qualities together are what prompted coach Kirby Smart to compare him to Jonathan Allen, the outstanding NFL defensive lineman he coached at Alabama.

Carter is able to dominate offensive linemen. The native Floridian is able to outrun them. His diverse array of moves makes him difficult to predict.

“He is dynamic in every way,” said Ohio State right guard Matthew Jones.

In the second half of Georgia’s spring game, defensive lineman Jalen Carter (88) attempts to catch a ball.
AP

Carter’s lackluster performance as a junior was partially due to an ankle ailment that slowed him down for a significant amount of the season. Still, he registered 29 tackles, seven for losses, three sacks, and two forced fumbles, and he feels better than he has all season.

The news is grim for Ohio State. Carter is an athletic anomaly. He played high school basketball and not only can he still dunk, but he can also windmill jam. Georgia has utilized him as a blocking fullback in goal-line situations on occasion, utilizing his natural abilities. Carter hauled up LSU quarterback Jayden Daniels with one arm and held the No. 1 with the other until the whistle sounded during the SEC Championship game. The play gained widespread popularity.

Carter stated, “It all transpired quickly.” “When I turned around and stood up, I already had him pinned, so he joined me. It was an instantaneous response; I simply threw up the No. 1 sign.”

Carter drew the largest crowd at media day on Thursday, an indication of the expected top draft pick’s bright future on NFL Sundays. Recently, Todd McShay, an ESPN draft analyst, stated that Carter has character issues. Carter was asked about this critique in a variety of ways, but he declined to reply negatively.

He said, “I didn’t take it any way at all.” “I’m simply attempting to be the best teammate possible.”

It should be remembered that McShay believed Carter could go second overall. Mel Kiper Jr., his colleague at ESPN, sees no disadvantage to picking Carter and has him projected as the No. 1 choice in his most recent mock draft.

Carter stated, “I have two more games to prove that may be true, and now it’s time to work and show the world what I’m capable of.”