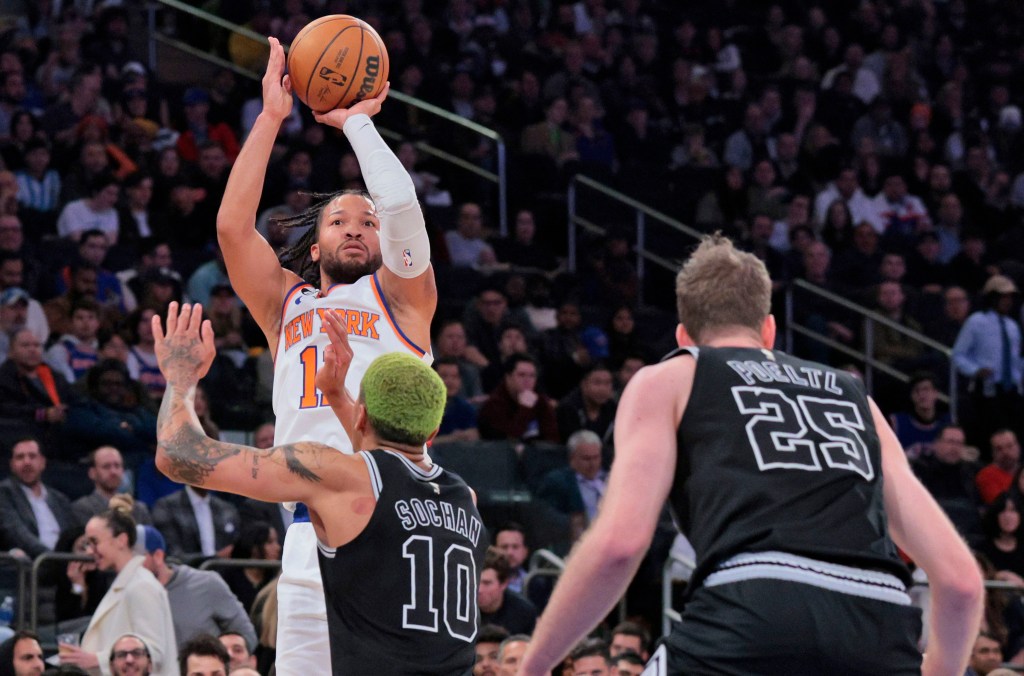 Gregg Popovich emphasized to his players prior to the game that this Knicks club would be vastly different from the one they defeated in San Antonio last week.

He noted that Jalen Brunson would be on the court this time.

The Spurs coach stated, “He wasn’t there the last time.” “He is a beast. He has such a rugged appearance.”

The most recent instance was Wednesday night. Brunson ensured that the Knicks did not get swept by the rebuilding Spurs in his second game back from a hip injury. He scored a career-high 38 points, including 11 in the fourth quarter, as the Knicks defeated the Spurs 117-114 at Madison Square Garden for their third consecutive victory.

On the strength of an 18-7 run, the Spurs seized the lead with 5:51 remaining after two free throws by Tre Jones with 4:21 remaining. The Knicks (21-18) responded immediately, with Brunson dishing to Quentin Grimes for a 3-pointer, and then converting a drive to take the lead for good. Then, with 56.0 seconds remaining, he added a step-back jumper that stretched the lead to four points.

Jalen Brunson, who scored 38 points during the Knicks’ 117-114 victory over the Spurs, hits a jumper over Jeremy Sochan.

Brunson’s heroics spared the Knicks from a humiliating defeat on a bad defensive night. The Spurs (12-26) shot 50 percent from the field and made 11 three-point shots. The Knicks limited San Antonio to five points in the last 4:21 of the game and forced a five-second violation with 5.7 seconds remaining and the Spurs trailing by only two points. The Spurs had one final opportunity to force OT but were unable to sink a 3-pointer.

The Knicks scored 39 points in the first quarter, 22 of which came from Randle and Brunson. The second unit failed to capitalize on this momentum. A scoring drought of 3:50 allowed the Spurs’ 13-0 surge to propel them to the lead. Randle and Brunson scored the final seven points of the half for the Knicks, which was fitting. They combined for 35 points in the first half, while no other Knick scored more than seven.

Keldon Johnson, who lead the Spurs in scoring with 26 points, attempts a layup against Mitchell Robinson during the Knicks’ victory.

The play of the first half was Randle’s chase-down block of Richardson, which nullified a layup and led to two Quickley free throws. The Garden applauded Randle’s hustling play, giving him a rousing ovation after he dashed back to block the easy basket.

Late in the third quarter, after missing six consecutive shots, Randle regained his offensive vigor by driving the lane. Four of his five shots were successful, including a step-back jumper at the buzzer that gave the Knicks a five-point lead heading into the fourth quarter. The Knicks desperately needed it, since they were unable to defeat the tenacious Spurs. At one point in the third quarter, they led by 12, but their inability to make stops (the Spurs shot 66 percent in the quarter) allowed San Antonio to stay within striking distance.