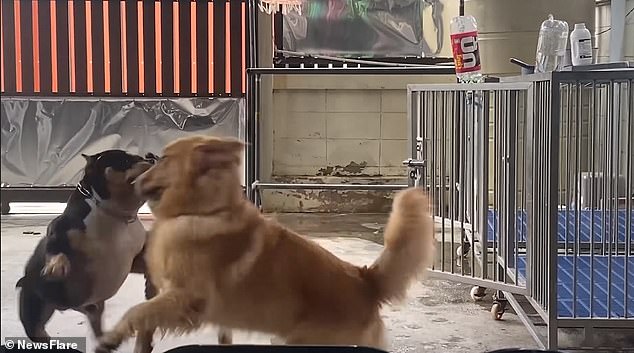 This is the adorable moment a clever golden retriever opened a cage to let two other dogs escape so they can all play.

Footage shows Daisy the retriever staring at her friends inside their cage in Bangkok, Thailand.

Eventually she manages to slide the handle across and pull the gate door open.

The two other dogs immediately jump out of the cage and start happily playing with Daisy.

The dogs’ owner Ponlapat Pattanapaiboonkul said: ‘Daisy is really smart. She knows when the other dogs want to leave and when they want to go back in.’

And it’s not the first time a clever pooch has managed to overcome a lock in a bid for freedom.

In 2018 a determined German shepherd named Ginger was dropped off at the Apple Valley Animal Shelter in California but refused to stay put.

Video posted by the shelter on Facebook shows Ginger busted out through the front door of the center, after appearing to lift her front legs up in the air and push her way to freedom.

Incredibly, she had already navigated her way through three doors prior to getting over the final hurdle and trotting out to freedom.

However, the escape was short-lived, as Ginger was found about three miles away just days afterwards.

But the story had a happy ending, and Ginger found a home with new owners.