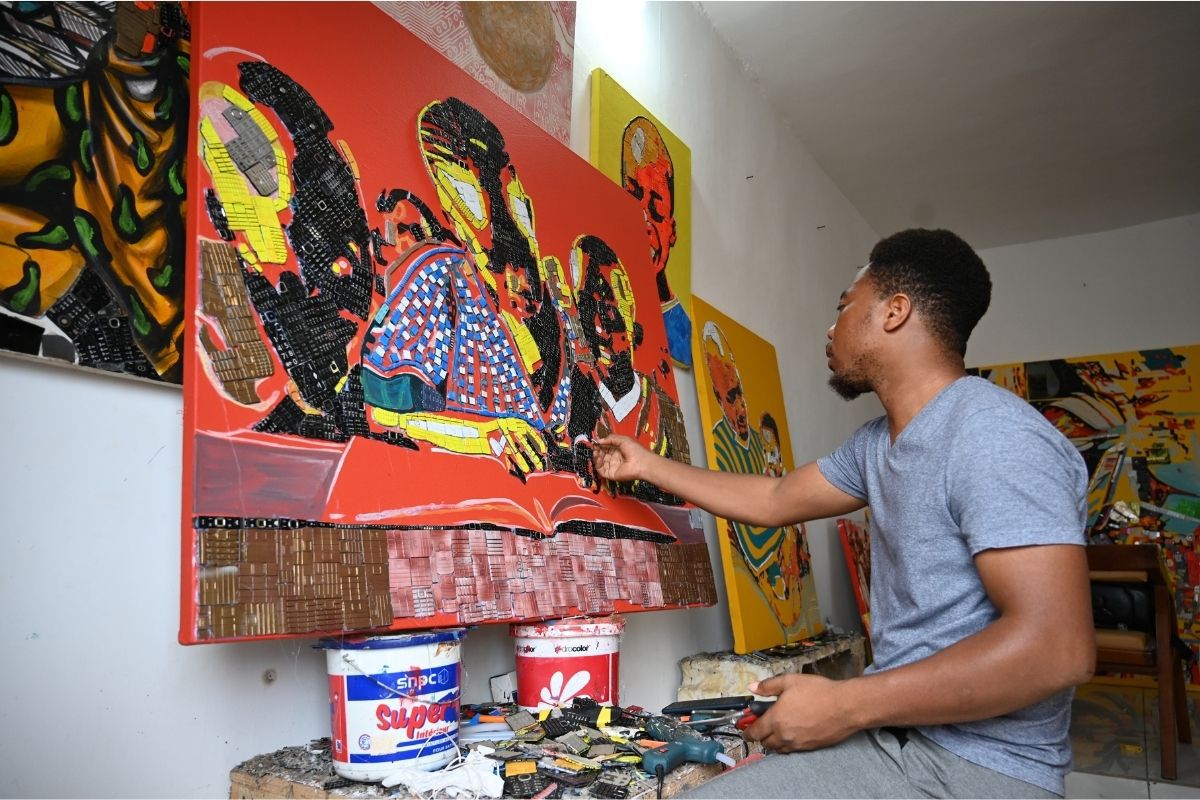 “I wanted to contribute something new,” said the artist, whose work is on display in Abidjan until July.

In his studio in Bingerville, near the Ivorian business capital, the 28-year-old describes himself as a “young contemporary artist” who wants to stand out from the crowd.

“I’ve been passionate about drawing since childhood. It was always me the teacher would send to the blackboard to illustrate lessons,” he says.

When he decided he wanted to go to art school, his parents, who worked as farmers in southwestern Ivory Coast, had no idea what it was. His art teacher had to visit to persuade them to let him go.

After graduating at the top of his class from the Abidjan Art School, he started looking for old mobile phone keyboards and screens on roadsides, in gutters and in rubbish tips.

“Now I have a whole team that is paid according to the quality of what they turn up with,” he says.

“I told them: ‘Stop throwing things away. Bring them to me and we can work with them.’”

In his studio, someone has dropped off bags brimming with mobile phone spare parts.

Koffi dives into a pile of keyboards and screens to find those he needs.

Placing them side by side on the canvas, he creates colourful human silhouettes in urban settings.

He says the aim is to try to “solve a problem” in a country where rubbish sorting is almost non-existent, and most household waste ends up in piles in the street.

“Most of my works reflect man’s day-to-day existence in society,” he said.

“I think phones are the tools that are most close to us at the moment. We have almost everything stored in our phones.”

The artist, who had exhibited his works in Morocco, Belgium and France, says his works seek to spark reflection about waste.

“We find all sorts of things in our dustbins… I’m trying to make people more aware.”

Keen to reflect current debates, Koffi has in his paintings portrayed pollution, but also floods, traffic jams and child soldiers.

One of his latest series, titled Life here, recounts daily life in Abidjan.

After a first exhibition in the coastal town of Bassam, his work is now on show until July at the capital’s Donwahi Foundation.