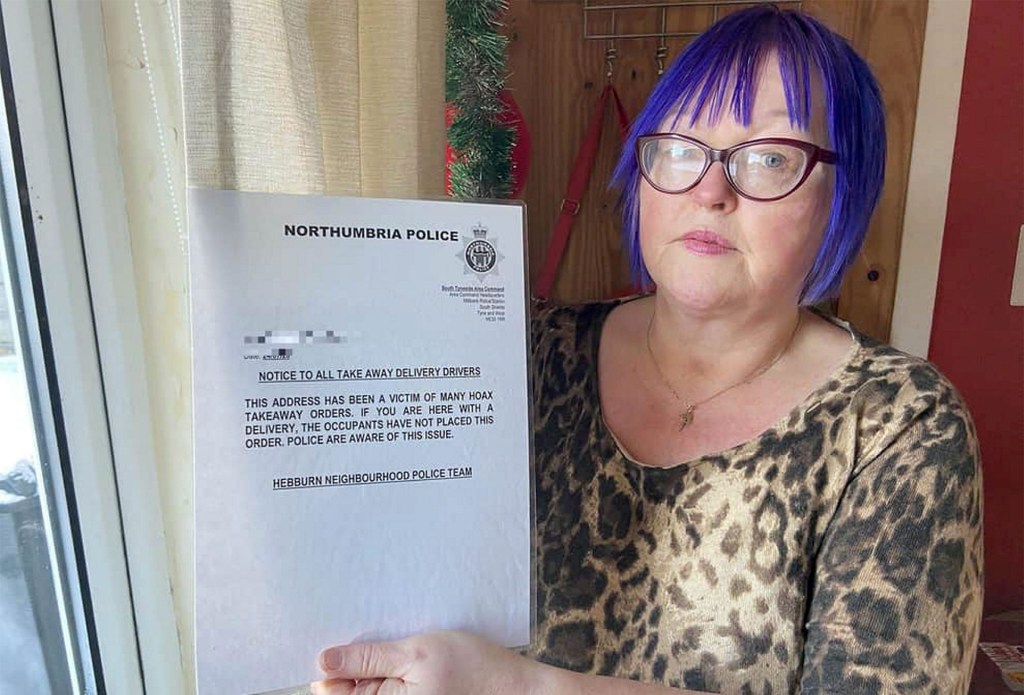 A British woman has been harassed by unwelcome takeout orders nearly every night for the past two and a half years.

Diane Maines, a resident of Hepburn, England, claims that she occasionally receives 30 takeaway orders in a single night, which appear to be placed by a stalker who is keeping a close eye on her residence.

“I have no idea why this is happening,” the 58-year-old told North News & Pictures, comparing the situation to “The Watcher” but with a lot more food involved.

The disturbed customer service representative continued, “I’m terrified to remain in my own home since it’s becoming increasingly frightening.” “I have no idea what to do. I keep to myself and have a limited group of close friends, so I have no idea who would want to do this to me.

Maines, who lives alone and has no known adversaries, reports receiving the meals for the first time in April 2020.

Initially, drivers would deliver five or six orders from various restaurants in a single evening, until the frequency of meal delivery increased.

Diane Maines, a native of Hepburn, England, claims that she often receives 30 takeaway orders in a single night, which appear to have been delivered by a stalker.

“It was nonstop, with 20 to 30 orders a night totaling thousands of pounds of food sent to my door,” Maines, a customer support representative, recalled.

After being inundated with mystery meals, she contacted the police in an effort to determine who was responsible for the odd behavior.

An inquiry revealed that the takeout, which originates from restaurants throughout the local area, is typically ordered via the Just Eat app.

All of the orders are “cash on delivery” with different names, accounts, and phone numbers.

She was lulled into a false feeling of security when the orders stopped arriving at her home many months ago, according to Maines.

“This may not occur for a few months, but on Friday, December 9th, I received six more,” she said. I’ve had to alter my lifestyle to cope with this, and I simply want it to end.

Similar to “The Watcher,” but with significantly more food, the police are begging for public aid to solve the mystery.

“We can confirm that an investigation was initiated after a woman reported receiving a succession of unsolicited takeaways from an unknown person to her Hebburn-area residence,” read a statement from the local police.

“The reports are being investigated as possible stalking,” they stated. “Extensive inquiries are ongoing, and anyone with information that could aid the inquiry is encouraged to contact the authorities.”

Maines continues to live in fear and has placed trash cans in front of her front door to dissuade delivery people from delivering meals.

She sobbed, “I feel like I’m going insane!” “It has a significant impact on my mental health and sleeping. I get anxious every time I hear a car driving up the street.”