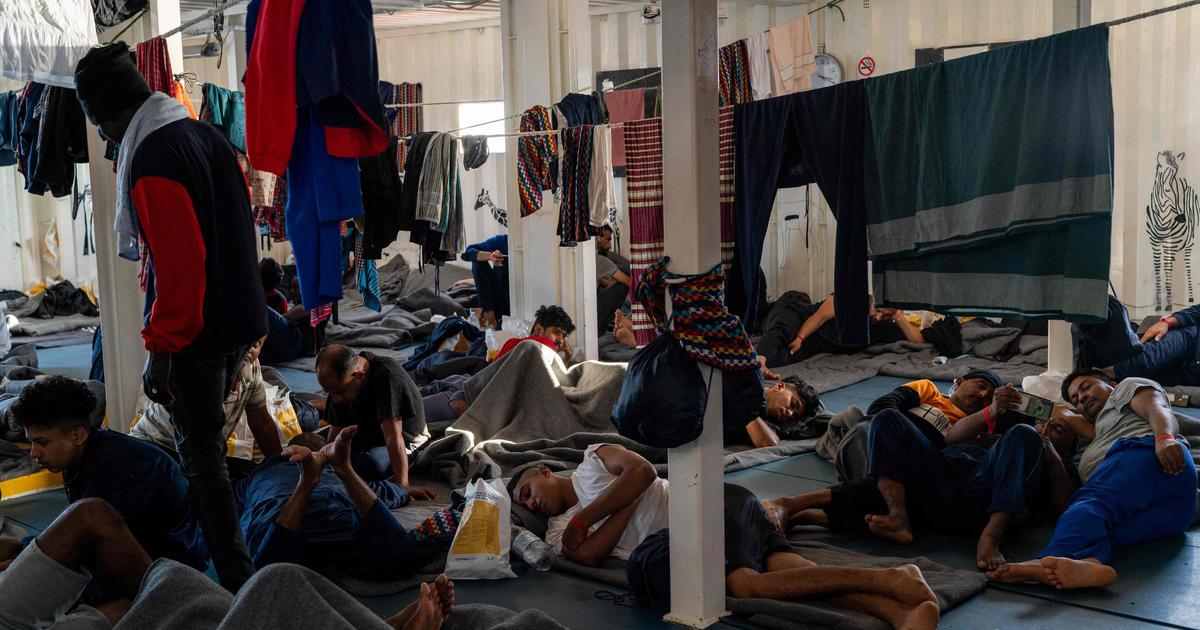 Italy’s new government, driven by the far right, has blocked its ports to rescue ships operated by non-governmental organizations and insisted that the countries flying the flags of the ships must accept the migrants. It provided Humanity 1 exclusive access to the port to land minors and those in need of medical care.

Officials from the German charity that operates the Humanity 1 contested Italy’s decision to distinguish “vulnerable” migrants, arguing that under international law, all migrants rescued at sea are entitled to a safe harbor.

Abourbakar Soumahoro, the sole Black legislator in Italy’s lower chamber, met the Humanity 1 at the Catania port and condemned the government’s restriction of ports to NGO ships as a “shame.”

“Right now, in the port of Catania, a selective disembarkation is taking place,” tweeted Soumahoro. “The government of Giorgia Meloni views as objects the worn corpses of castaways already ravaged by cold, fatigue, trauma, and torture.”

Interior Minister Matteo Piantedosi stated on Friday that the Humanity 1 would only be permitted to enter Italian waters for the purpose of disembarking kids and those in need of immediate medical attention.

Germany and France each demanded that Italy provide a secure port for the migrants and suggested that they would accept some of the refugees so that Italy would not carry the burden alone.

The other three ships have not been granted similar provisions. The Norwegian-flagged Geo Barents, carrying 572 refugees, and the German-flagged Rise Above, carrying 93 refugees, approached Italian waters east of Sicily over the weekend to seek shelter from storm-tossed seas, but without Italy’s permission or a response to repeated calls for a safe port.

The Ocean Viking, operated by the European humanitarian organization SOS Mediteranee and carrying 234 migrants, lingered in international seas south of the Messina Strait. Is asks for a port also unanswered.

“We have waited ten days for a secure location to disembark the 572 survivors,” said Juan Mattias Gil, chief of mission for the Doctors without Borders-operated Geo Barents.

Riccardo Gatti, chief of operations, stated that in addition to suffering from skin and respiratory diseases, many on board were agitated due to the lengthy duration at sea.

Humanity 1’s operator, SOS Humanity, stated that 19 requests for a safe port had gone unanswered. It was stated that the vessel was transporting 100 unaccompanied youngsters as well as newborns as young as 7 months.

The new Italian government insists that countries flying the charity-run ships’ flags must accept the migrants. At a press conference on Friday evening, Piantedosi referred to these vessels as “islands” under the jurisdiction of the flag countries.

Infrastructure Minister Matteo Salvini, who is well-known for his anti-immigrant attitude, applauded the new directive he signed alongside Italy’s military and interior ministers.

Salvini stated in a Facebook video, reiterating his claim that the ships’ presence encourages traffickers, “We stop being a captive to these international and private NGOs that manage the routes, the traffic, the transportation, and the migration policies.”

Nongovernmental organizations reject this interpretation, stating that they are bound by the law of the sea to rescue persons in peril and that coastal states must provide a safe port as soon as possible.

Mirka Schaefer, an advocate for SOS Humanity, asserted that the Italian interior minister’s directive is unquestionably unconstitutional. “Returning refugees at the Italian border violates international law and the Geneva Convention Relating to the Status of Refugees.”

The majority of these migrants have gone via Libya, where they boarded unseaworthy vessels in search of a better life in Europe, many enduring mistreatment at the hands of human traffickers.

Thousands of migrants have reached Italian shores in the past week, either on their own in fishing boats or after being rescued at sea by Italian authorities, while humanitarian boats are denied safe harbor. On Saturday, 147 people landed in Augusta, including 59 aboard the oil tanker Zagara, which was carrying two bodies.

The situation aboard the 25-meter (82-foot) vessel Rise Above, managed by the German NGO Mission Lifeline, was claimed to be particularly dire, with 93 people crammed aboard.

Hermine Poschmann, the ship’s spokesperson, reported a “really critical situation that… led to very high tensions” on board as a result of passengers seeing land and not understanding why they were not docking.

This is not a request. This is everyone’s right,” he declared on Friday evening.