Skip to content
Go Home «» News «» Breaking News «» Ireland Baldwin, who is pregnant, hints at the baby’s sex and compares her pregnancy to “sub sandwiches.” 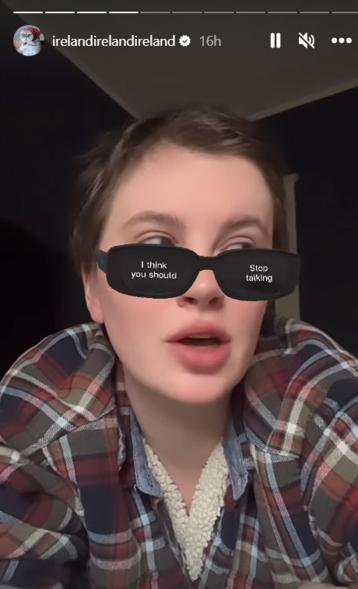 Ireland Baldwin, who is pregnant, revealed that she is expecting a baby girl as she criticized those who requested images of her expanding belly.

On Wednesday, the 27-year-old, who is expecting her first child with partner RAC, released a video on social media referring to their unborn kid as “her” and “she.”

“If one more person asks me to email a picture of my bump to them, I’m going to lose my head. Since I do not possess one. Baldwin added in the video released to her Instagram Story on Wednesday night, “My child is so deeply snuggled in there, and I’m tall, so there’s a lot of room for her in there.”

She then added that there is a small bump, but it appears to be a food baby.

“There’s … I am not something. You wouldn’t know. “I appear to have consumed approximately twelve sub sandwiches, but other than that, you would never know,” she joked. “So love you, but please stop asking.”

Interestingly enough, Baldwin added that the only meal she is currently desiring is grapefruit and sub sandwiches from Jersey Mike’s.

She also advised her followers not to blame her for eating cold cuts while pregnant, because she “would die” without her “turkey provolone, Mike’s way, with extra, more dressing.”

“If you happen to be a bystander or employee of a Jersey Mike’s that I enter when I’m obviously pregnant, and you give me a dirty look or judge me in any way or give me unsolicited advice about cold cuts and turkey and listeria and all that while you’re pregnant, I will fight you while I’m pregnant at a Jersey Mike’s, and that’s not a good look for me,” she said.

Baldwin revealed her “hormonal” pregnancy experience with her 681,000 Instagram followers while joking about the things that irritate her as a pregnant lady.

This is the first child she and RAC will have together.

Baldwin said that she will not tolerate unwelcome physical contact.

“I dislike being touched even when I’m not pregnant, so if you think I won’t throw you over my shoulder, keep your hands to yourself. She said, “Keep your hands inside the van.”

Baldwin announced on New Year’s Day that she was expecting her first child with her boyfriend, RAC, also known as André Allen Anjos.

At the time, the daughter of Alec Baldwin and Kim Basinger announced the good news by posting a sonogram of her infant to Instagram.

»Ireland Baldwin, who is pregnant, hints at the baby’s sex and compares her pregnancy to “sub sandwiches.”«