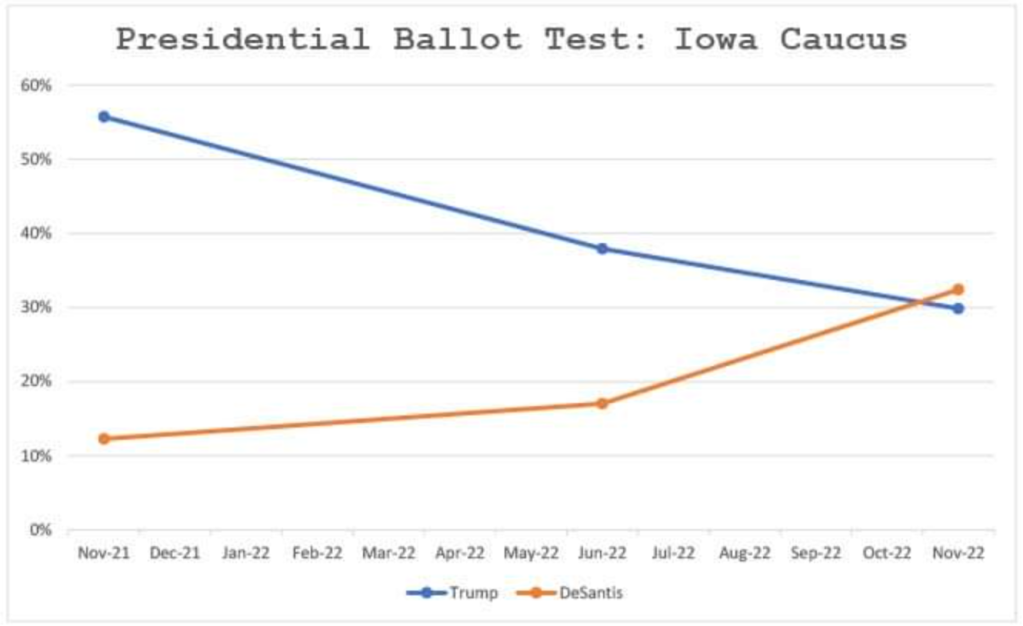 32% of prospective caucus-goers, according to a survey issued by Neighborhood Research and Media on Monday, would choose the 44-year-old Florida governor as their top pick. Another 30% of respondents cited the 76-year-old former president as their first choice.

Trump’s support is now less than half of what it was a year ago, while DeSantis’ vote has nearly tripled, according to a study by Rick Shaftan of Neighborhood Research and Media. Trump is now a significant underdog in the race.

When second and third choices were tallied — a crucial factor in a caucus state like Iowa — DeSantis received 48% of the vote, Trump received 42%, Pence received 6%, and Noem received 3%.

The new study demonstrates a rising dislike for the former commander-in-chief, who declared his third consecutive candidacy for the White House on November 15.

The same day, a Morning Consult/Politico survey conducted after the midterm elections revealed that 65 percent of Americans thought Trump should “probably” or “absolutely” not run for president, with 53 percent saying he should “certainly not.”

In June, former President Donald Trump had a 38% to 17% lead against DeSantis.
REUTERS
Votes for DeSantis have nearly quadrupled.
AFP Images via Getty

The Iowa study also followed a recent national YouGov survey in which DeSantis led Trump by seven points. This poll, issued on Friday, was the first of the 2024 election cycle to place the Florida governor ahead of Trump among national Republican voters.

42% of Republicans and GOP-leaning independents favored DeSantis over Trump for the party’s presidential nomination, while 35% remained loyal to Trump.

Between November 14 and November 18, the Neighborhood Research and Media poll polled 393 probable Republican caucus-goers. The margin of error for this survey is plus-or-minus five percentage points.

»Iowa Republicans abandon Trump for DeSantis, according to a caucus survey«