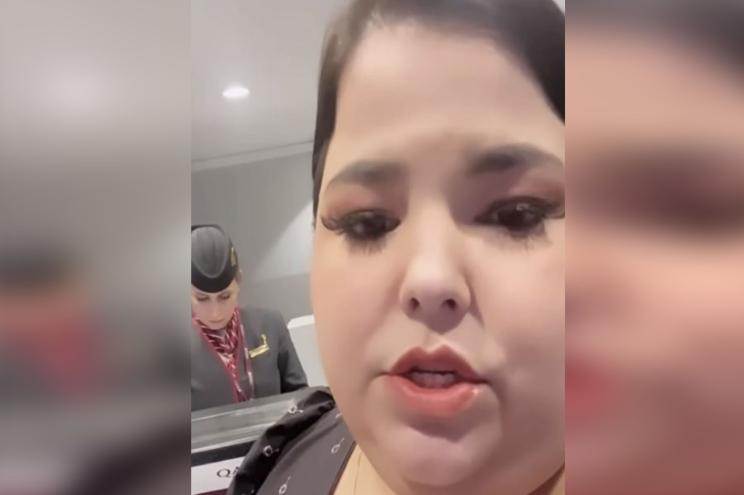 A lady asserts that an airline refused her boarding because she is “too overweight.”

Juliana Nehme claimed she was stopped from boarding a flight after being told she was “too fat.”

Since then, her video about the alleged event has gone viral.

In the letter, she claimed that she, her mother, sister, and nephew were on vacation in Lebanon and returning to Brazil through Doha when a service member informed her that she would need to purchase a more expensive first-class seat in order to join the aircraft.

Juliana Nehme was in Lebanon with her mom, sister and nephew when an airline staffer told her she would have to purchase a more expensive first-class seat.

The Daily Mail claimed that the airline stated one of Juliana’s family members failed to submit the needed Covid-19 PRC test documentation to board the aircraft.

“The passenger in issue at Beirut Airport was first extremely nasty and hostile to check-in workers when a member of her group failed to present requisite PCR papers for admission into Brazil,” a Qatar Airways spokesperson told the magazine.

A member of the airline crew informed Juliana Nehme, who was in Lebanon with her mother, sister, and nephew, that she would have to purchase a more expensive first-class seat.

As a consequence, airport security was asked to interfere since both personnel and passengers were quite worried about her actions.

Juliana said in her Thursday-posted video, which has received more than 50,000 ‘likes’ and tens of thousands of comments, that she and her family had no trouble boarding an Air France trip to Lebanon.

The airline said it rebooked Juliana Nehme on a flight on Nov. 24 from Lebanon.

She stated in Portuguese, “I purchased a return ticket to Brazil through Qatar, and upon arriving at the time of check-in, a Qatar flight attendant phoned my mother, who was completing our check-in, and informed her that I was not permitted to board because I am overweight.

Julianna stated that her family spent a total of $4,000 on economy tickets, including her $947 ticket, “just to be refused boarding”

Juliana Nehme stated that she had never encountered any problems boarding an Air France aircraft to Lebanon.
Instagram

The airline claimed one of Juliana’s family members did not have a required Covid-19 PRC test documentation.

“A Qatar airline (employee) contacted my mother while the lady was doing our check-in to inform her that I wasn’t welcome to board the aircraft because I’m overweight,” she added.

According to the Daily Mail, in describing its policy, Qatar Airways stated that any passenger “who interferes with the space of a fellow traveler and is unable to fasten their seatbelt or lower their armrests may be required to purchase an additional seat as a safety precaution and for the comfort and safety of all passengers.”

According to the airline, this is consistent with industry standards and the majority of carriers.

“What am I going to do now? They are refusing my ability to fly, yet I arrived by AirFrance with no issues and everything went smoothly. “And now they’re refusing my ticket,” the disgruntled traveler stated at the Rafic Hariri International Airport in Beirut.

“They are demanding me to purchase an executive ticket to return to my home country, despite the fact that I arrived on a standard seat ticket.”

Juliana stated in her post that she spent about two hours pleading with the airline to allow her to board the aircraft and return home.

“My mum also tried everything. “I was threatened while attempting to film their actions,” she stated.

She stayed with her mother in Beirut Airport, Lebanon, while her sister and nephew boarded a Qatar Airlines aircraft to Doha, Qatar.

The airline said that one of Juliana’s relatives lacked the necessary Covid-19 PRC test proof.
Instagram

“I’m wasting money on an unnecessary hotel and cab! Can no longer afford to wait around. And they told I had purchase a second ticket for my mum and upgrade my own to executive class. However, nobody wished to inform me! I was severely embarrassed in front of everyone at the airport! All due to me being FAT!”

Julianna was still in Lebanon as of the reporting date.

A Qatar Airways representative told the Daily Mail that the customer has been rebooked on a flight departing Lebanon this evening (November 24).

According to Smarter Travel, airline obesity regulations vary in degree and depth, but stipulate that if you cannot fit into a seat with an extended seatbelt and the armrests down, you will be charged for two seats or ejected from the plane.

Some airlines may try their utmost to accommodate fat people by providing a second ticket for free or refunding the cost of purchasing a second seat in advance if the trip is not completely booked.

According to the Australian Institute of Health and Welfare, 67 percent of adult Australians are overweight or obese.