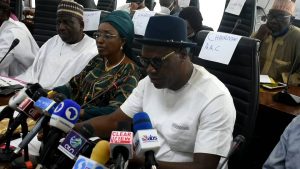 The Independent National Electoral Commission, INEC, has suspended physical registration exercise in Anambra State in compliance with the sixty days to the election as required by Section 9(5) of the Electoral Act 2010 as amended.

Speaking at the third quarterly meeting with political parties, the national chairman, Professor Mahmood Yakubu said the commission will use the next few weeks to compile the register of voters for claims and objections, clean up the data, print the PVCs for collection and compile the register for each of the five thousand, seven hundred and twenty polling units in the state.

He assured that the registrant in Anambra State will receive their cards before the election just as he promised political parties fielding candidates in the election that they will be given a copy of the voters’ register on October seventh as published in the timetable and schedule of activities for the election.

Professor Yakubu also announced that they have found appropriate technology to address the incessant failure of Smart Card Reader during elections.

He said after working on the Z-pad in the past one year, its functionality has been integrated into the INEC Voter Enrollment Device, IVED, currently used for registration and also on election day, for the Bimodal Voter Accreditation System, BVAS, that is, for fingerprint authentication during accreditation where it fails for facial authentication.

The INEC Boss however, lamented that issues of litigations, particularly conflicting orders emanating from Courts are making their work difficult frowning that the most disconcerting is that the more the commission strives to improve the credibility and transparency of the electoral process, the more extraneous obstacles are put in their way through litigations.

Professor Yakubu assured that the Commission will work with both the Bar and the Bench to defend the electoral process and charged leaders of political parties to live up to their responsibilities so that INEC can do its work as both umpire and regulator.

In his speech, the chairman Inter-Party Advisory Council, IPAC, Dr. Leonard Nzenwa, said the National Assembly rejecting the electronic transmission of election results amounts to rejecting the most crucial legislative instrument that would have altered the way elections are conducted in the country and also helped to stop elections rigging and manipulation of election results.

He urged political parties to find better ways to sensitize voters to obtain voters card and use it for voting and not as another form of identification.

The Council also charged INEC to showcase its expertise during the Anambra gubernatorial polls so that no one is left in doubt that the commission is determined to enthrone transparent and credible election.