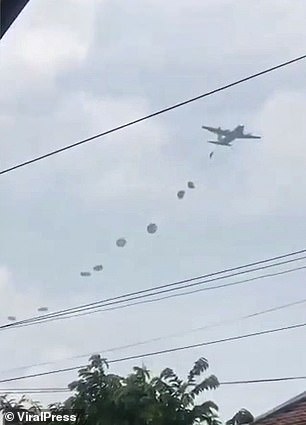 During a training exercise, an Indonesian paratrooper’s parachute became entangled, causing him to fall 600 feet. Miraculously, he survived.

The tragedy occurred on November 8 around 10.30 a.m., when Salman Krisnes, a member of the country’s Quick Reaction Forces Command, was participating in a training exercise at Sulaiman Air Base, east of the capital Jakarta.

Salman, along with other servicemen, was seen on video jumping from a low-flying Hercules C-130 aircraft, but plummeting from the sky when his parachute failed to open correctly.

The Indonesian Air Force reported that Salman survived with a shattered hip and is currently recuperating in a hospital.

Last week, during a training jump, skilled Indonesian paratrooper Salman Krisnes fell to land after his parachute failed to release (left and right)

Colonel Gunawan, spokesman for the Quick Reaction Forces, stated, ‘One of the soldiers had an accident and was unable to handle his parachute correctly when he dropped from the plane because several ropes were knotted.

This incident resulted in a fracture to the soldier’s right hip, which has been treated by medical professionals.

He was sent to the Indonesian Air Force Hospital at Salamun Bandung.

His condition is stable and he is being referred for additional care.’

The Quick Reaction Forces Command of Indonesia, often known as Kopasgat, is an elite special forces organization within the Indonesian Air Force.

Due to the color of their headgear, they are known as “orange berets” and are frequently charged with anti-terrorism operations.

Kopasgat are also responsible for capturing and defending airfields, responding to aircraft hijackings, conducting intelligence operations, and parachute-dropping into combat.

Salman survived the 1,600-foot fall with only a fractured hip and is currently in stable condition at the hospital, according to a spokesman for the paratrooper unit.