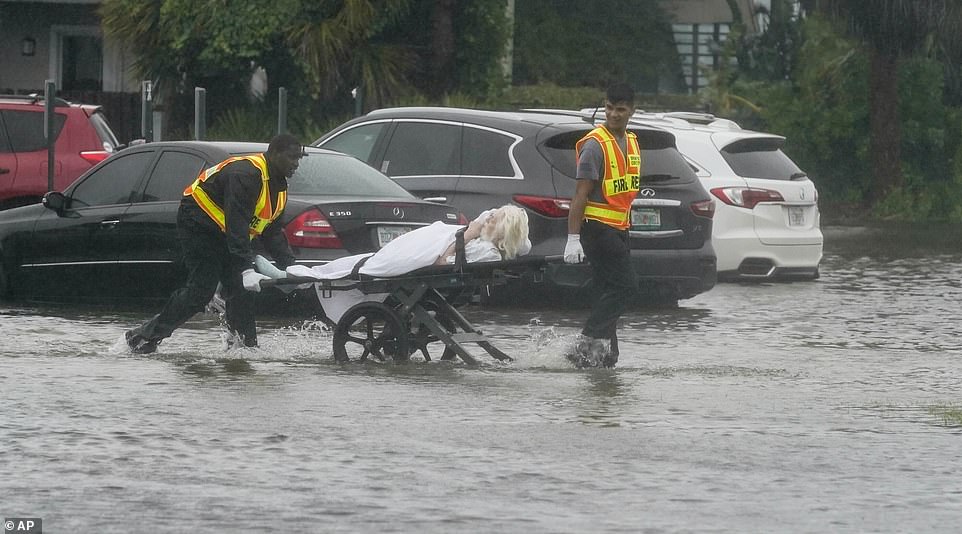 Emergency personnel were spotted removing senior citizens from an Orlando nursing home on Thursday as a one-in-a-million hurricane continued to pound the nation’s theme park capital before moving on to South Carolina.

More than 2.6 million people lost power when Hurricane Ian, a Category 4 hurricane, pounded the Sunshine State on Wednesday afternoon. Thousands of people are still stuck in their houses, and hundreds of people are presumed dead.

Officials claim that although rescue efforts are now underway throughout the state, they are only’scratching the surface’ of the thousands of individuals who are still unaccounted for or trapped as a result of the devastating flood damage and 155 mph winds.

According to the Wall Street Journal, the storm also caused life-threatening and catastrophic flooding in Orlando, a city of 2.7 million people, forcing residents to kayak their way to safety through the city’s streets because all of the city’s highways, including the international airport, are still closed.

Orange County Fire and Rescue were spotted attempting to rescue senior citizens from the Avante at Orlando nursing facility, but the feet-deep water was so deep that it was even powerful enough to halt an ambulance in its tracks.

On Thursday morning, the department shared a number of videos on Twitter that showed personnel entering the building while wearing knee-length coats. They then emerged with old people on stretchers, escorting them to neighboring buses so they could be transported, according to reports, to nearby shelters.

The wind from the storm was spotted increasing up as the fire rescue teams entered the care home.

According to WFTV, authorities said the evacuations were being carried out as a precaution as the city’s floods continued to rise.

As it moves toward South Carolina, where authorities have already issued a hurricane warning for the entire coast as tropical storm-force winds extend as far north as Myrtle Beach, Ian, which was downgraded to a tropical storm earlier on Thursday, is now expected to once again reach hurricane force strength.

The National Weather Service warns that the region may now experience life-threatening circumstances due to storm surges that might exceed seven feet.

Massive damage from the hurricane has already been done in Florida, where experts estimate that repairs might cost up to $260 billion. However, cleanup activities are now halted since large portions of Florida are still under water.

As 50 National Guard helicopters begin the search and rescue operation for thousands of people who are trapped or missing in the wake of the devastating flood damage and 155 mph winds, hundreds of people are now thought dead.

Rescuers, however, acknowledged this morning that they are just “scratching the surface” and that the true number of casualties may be far higher.

The increasing floodwater that is engulfing two-story houses has trapped thousands of people inside their homes, some of whom were compelled to flee to their rooftops.

The storm, which tore through central Florida on Thursday, was particularly destructive in Orlando, as evidenced by images and videos shared on social media.

While Orlando authorities are urging everyone to keep off the streets, some individuals can be spotted kayaking through the city’s streets.

Another video shared on social media reveals that at least one municipal bridge has collapsed as water is still pouring over the concrete.

As Disney World and Universal Orlando Studios look for creative methods to amuse the visitors at their hotels, all of the routes leading into the city remain blocked, including the international airport.

Officials from Walt Disney World stated in a statement on Thursday: “We are thinking about our neighbors across Florida.” Together, we will overcome this, and we will support our cast mates and the local community.

Our theme parks and other operational locations are closed today as a matter of safety as workers examine the storm’s damage and clean debris.

“We are grateful for all of our cast members who continue to look after the thousands of visitors who are now lodged at our Disney Resort hotels,” the statement reads.

The declaration was made in response to a video that was uploaded to Twitter on Wednesday night showing extensive flooding outside the Disney Swan and Dolphin Resort.

Even as the hurricane continues its fury on its approach to South Carolina, hundreds of people are now thought dead.

The National Hurricane Center reduced Ian to a tropical storm early on Thursday after it made a disastrous landfall on Wednesday afternoon as a Category 4 hurricane.

However, according to the National Hurricane Center, it will be a Category 1 hurricane when it makes landfall in the United States for the second time on Friday off the coast of South Carolina.

It becomes a Category 1 storm when its wind speeds hit 74 mph or higher.