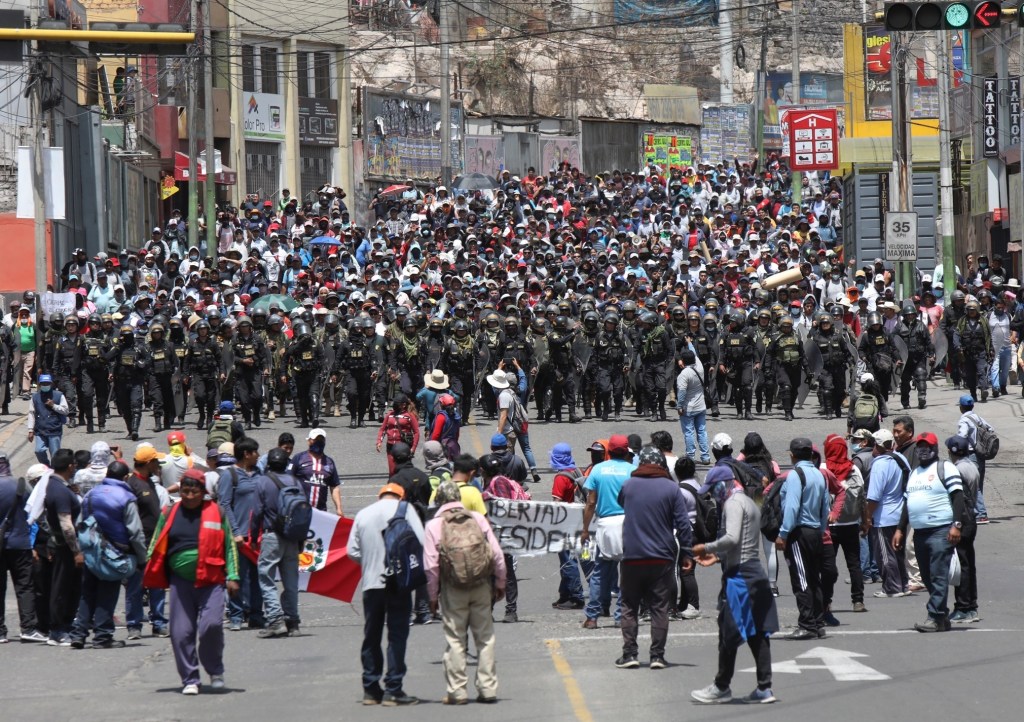 Peru’s new government declared a national emergency on Wednesday as it attempted to quell violent protests following the ousting of President Pedro Castillo, suspending “personal security and freedom” rights for 30 days across the Andean nation.

As thousands of Peruvians take to the streets, acts of vandalism, violence, and highway blockades “demand a robust and authoritative response from the government,” according to Defense Minister Luis Otarola Pearanda.

The declaration suspends the rights of assembly and freedom of movement and authorizes the police, backed by the military, to conduct home searches without a warrant or court order. Otarola stated that it had not yet been established if a nighttime curfew would be implemented.

Peru has been beset by a political crisis and turmoil that have damaged stability for nearly a week.

A police line approaching a gathering of protestors in Arequipa, Peru, on Wednesday, December 14.
AP

Jorge Aragón, a political science professor at Pontifical Catholic University of Peru, remarked that “the whole concept of order, the fundamental concept of authority that may rule the country in some way, has been put into question” as a result of the escalating violence.

The order, he noted, is “a method of seeking to regain a certain minimum stability, a certain minimum functioning of the country, but it is also a recognition that this cannot be achieved without the use of force.”

The minister of defense stated that the proclamation was approved by the council of ministers. It did not name Peru’s new president, Dina Boluarte, who was sworn in by Congress hours after lawmakers removed Castillo last week.

Boluarte begged for calm as protests against her and Congress persisted.

Referring to requests for fast elections, she proposed that they be conducted a year from now, four months earlier than her initial suggestion, which did not appease anyone.

A worker at a currency exchange store is besieged by riot police in Lima, Peru on Wednesday, December 14.

Boluarte suggested to reporters that general elections may be held in December 2023, just before to a hearing to determine whether Castillo will remain imprisoned for 18 months while authorities develop a rebellion case against him. After Castillo’s refusal to participate, the judge postponed the hearing.

“All I can say to you, sisters and brothers, is to be calm,” Boluarte stated. “We have previously lived through this experience in the 1980s and 1990s, and I do not believe we wish to revisit this unpleasant past.”

The statements of Castillo’s running mate recalled the years of devastation during which the Shining Path guerrilla presided over numerous vehicle bombings and assassinations. More than half of the estimated roughly 70,000 murders and disappearances caused by multiple rebel factions and a violent government counterinsurgency reaction were attributed to this outfit.

Protesters outside the capital city of Lima are calling for the immediate release of former president Castillo from National Police detention prior to an upcoming hearing.
AP

Protesters have stopped roadways in the Peruvian capital and other rural areas, demanding the release of Castillo, the resignation of Boluarte, and the urgent schedule of general elections to choose a new president and replace all members of Congress.

A hospital director reported that at least seven people have been dead, including a youngster who died Wednesday after being injured during protests in Andahuaylas.

All perished in the same types of disadvantaged towns that catapulted the rural teachers union leader to victory last year on the promise of a populist approach to government.

Castillo was removed from office by legislators on December 7 after he attempted to dissolve Congress prior to their third effort to impeach him. As he proceeded through Lima’s streets with his security detail, his vehicle was intercepted. He was accused by prosecutors of attempting to seek political asylum at the Mexican Embassy.

In a handwritten letter given with The Associated Press on Wednesday by Castillo’s associate Mauro Gonzales, Castillo begged the Inter-American Commission on Human Rights to advocate for his and his “justice-seeking Peruvian brothers'” rights. In certain instances, the commission litigates charges of human rights abuses.

In the past week, demonstrators have burnt police stations, seized an airfield used by the military, and occupied the runway of Arequipa’s international airport, which serves as a gateway to some of Peru’s most popular tourist destinations. The train that transports tourists to Machu Picchu has ceased operations, while roadblocks on the Pan-American Highway have trapped trailer trucks for days, resulting in the spoilage of goods destined for the capital.

Otarola stated on Tuesday that the total number of people “causing this disturbance” in the country was no more than 8,000, an estimate that vastly understates Castillo’s support. Castillo took office in July 2021 after gaining nearly 8.8 million votes and 50.1% of the vote in the presidential runoff election.

Wednesday, Boluarte reported that 200 police officers were injured during the protests. At the hospital, she met at least two of them.

The president stated to a police officer with facial injuries that “one group,” which she did not identify, is organizing the protests.

Boluarte stated, “It is an organization that is attracting the misinformed population, as many people who attend this protest do not even know why they are there.” However, the smaller group that supports them encourages them to express these aggressive attitudes.

By Wednesday, troops of the military forces were already stationed in Arequipa and other areas outside of Lima. Securing rural communities distant from the capital city could take more time.

In response to protests and the new government’s suspension of “personal security and freedom,” riot police encircle a Lima intersection.

Five of the fatalities have occurred in Andahuaylas, a village in the Andes whose destitute inhabitants have long felt abandoned by the government and have occasionally rebelled. Luis Torres, a college student, attended an approximately 2,000-person demonstration on Wednesday as a few white trucks carrying soldiers drove through the streets.

This measure is out of proportion. It demonstrates the political instability of Mrs. Dina Boluarte’s government,” Torres stated. “We are all marching peacefully to demand something that is just. At least Andahuaylas will keep fighting!”