Skip to content
Go Home «» News «» World News «» In Philadelphia, the box covering the statue of Christopher Columbus is removed after a judge ruled against the mayor 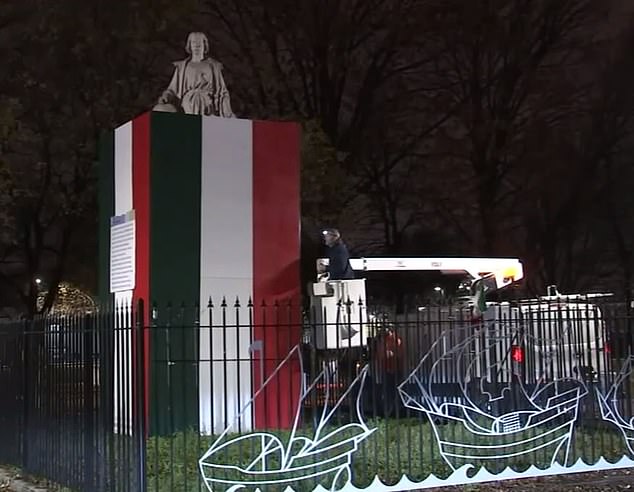 The city of Philadelphia has removed the plywood box that had been placed over a statue of Christopher Columbus, after a judge denied the mayor’s request to remove the monument amid protests against racial inequality in 2020. In her decision, Judge Mary Hannah Leavitt stated that if the city disagrees with the’message’ sent by the statue, it may affix its own plaque with the message it wishes to communicate

In 1876, the City accepted the donation of the statue of Christopher Columbus. It has a fiduciary duty to conserve the statue, which was recognized a historic object by the government in 2017. The Columbus statue is not City property, such as a City snowblower, wrote the judge.

Kevin Lessard, the spokesman for Democratic Mayor Jim Kenney, stated that city officials were dissatisfied with the ruling, but that the city will accept the judge’s decision. Sunday evening, city employees were observed removing the plywood box.

The city of Philadelphia has removed a plywood box covering a statue of 15th-century Italian explorer Christopher Columbus, after a judge ruled against the mayor’s demand that the monument be destroyed in the wake of protests by Black Lives Matter in 2020.

The white statue is placed in Marconi Park, which was established to honor the 20th-century cultural identity of the surrounding Italian American enclave community in Philadelphia and became the designated site of the annual Columbus Day Parade.

Lessard stated via email, ‘We will also continue to investigate approaches that allow Philadelphians to celebrate their ancestry and culture while honoring the histories and situations of everyone’s diverse backgrounds.’

The city and the Friends of Marconi Plaza, where the statue rests, have been embroiled in a protracted dispute regarding the statue.

It was given to the city by the Italian-American community to honor the nation’s centennial, according to a 16-page judgement by the Commonwealth Court of the state.

Kenney has stated that Columbus was celebrated for centuries as an explorer, but had a’much more infamous’ background, including the enslavement of Indigenous people and the imposition of punishments such as amputation or even death.

In 2020, after protests against racial inequality, Philadelphia Mayor Jim Kenney deemed the statue’s removal a matter of public safety and issued an order for its removal.

In June 2020, a city employee measures the statue of Christopher Columbus at Marconi Plaza in Philadelphia, just before a plywood box is placed over it.

In her judgement, Judge Mary Leavitt stated that the city accepted the contribution of the Columbus statue in 1876. It has a fiduciary duty to conserve the statue, which was recognized a historic object by the government in 2017. The Columbus statue does not belong to the City.

After racial injustice protests resumed in June 2020, with some of them focusing on the statue, Kenney ordered its removal, citing public safety concerns.

Last year, however, a judge overruled the city’s decision, stating that the city had failed to demonstrate that the statue’s removal was required for public safety.

The box concealing the statue has been painted with green, white, and red stripes to resemble the Italian flag at the request of the district’s municipal council representative.

While Kenny has stressed social peace, crime has increased in the City of Brotherly Love over the past several years, including a 22.9 percent increase year-over-year.

Although the homicide rate has decreased by 9.9 percent since 2021, the general trend over the past few years has been a sharp ascent. Violent crime as a whole is up approximately three percent year-to-date.

In 2022, a total of 14,264 violent crimes were recorded to the Philadelphia Police Department.

The Philadelphia police told the city’s mayor earlier this year that they “can’t keep up” with the quickly rising homicide rate, and the mayor signed an order last month prohibiting individuals from carrying firearms in public locations such as parks and schools.

The lawlessness situation in Philadelphia has become so severe that progressive District Attorney Larry Krasner is facing an impeachment trial.

This month, state legislators decided to impeach District Attorney Larry Krasner for progressive policies that have caused to a significant increase in crime in Philadelphia.

»In Philadelphia, the box covering the statue of Christopher Columbus is removed after a judge ruled against the mayor«