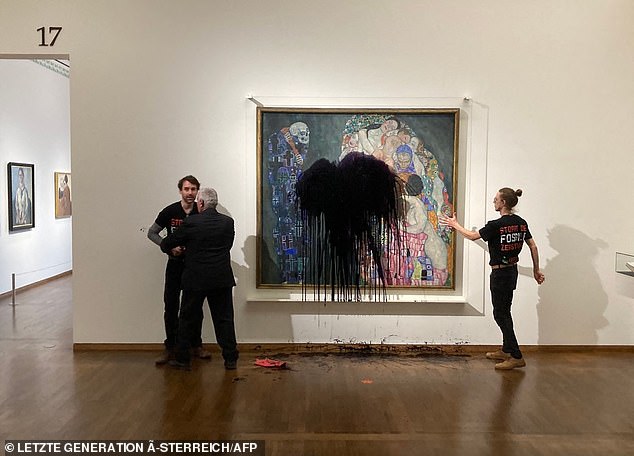 Tuesday, climate activists poured a black liquid on Gustav Klimt’s masterpiece “Death and Life” at the Leopold Museum in Vienna.

The museum’s spokesman, Klaus Pokorny, stated that conservators are attempting to ascertain if the painting shielded by glass has been harmed.

Last generation, a group of Austrian and German climate activists, claimed responsibility for the attack on Twitter.

In photographs posted on social media by the gang, two individuals can be seen pouring a black, oily liquid across the renowned Klimt painting before being apprehended by a museum staffer.

A spokesman for AFP reported that climate activists spilled a black liquid over Gustav Klimt’s masterwork “Death and Life” at Vienna’s Leopold Museum on Tuesday.

‘Stop fossil destruction. One of the protesters yelled, “We’re hurtling toward climatic hell.”

Tuesday was a free day at the Leopold Museum, sponsored by the Austrian oil and gas corporation OMV.

In recent weeks, numerous artworks across Europe have been vandalized in protest of the lack of action against climate change.

They have adhered themselves to a Francisco Goya painting in Madrid, flung soup at Vincent van Goghs in London and Rome, and smeared mashed potatoes on a Claude Monet.

In response to the protests, several of the world’s most prestigious institutions published a joint statement last week stating that environmental activists who attack artworks ‘grossly underestimate’ the potential damage.

More than ninety directors of world-renowned museums, including the Guggenheim in New York, the Louvre in Paris, and the Uffizi in Florence, signed the declaration.