Skip to content
Go Home «» News «» Breaking News «» In a tribute to the past, the Giants are hosting their second Legacy Game 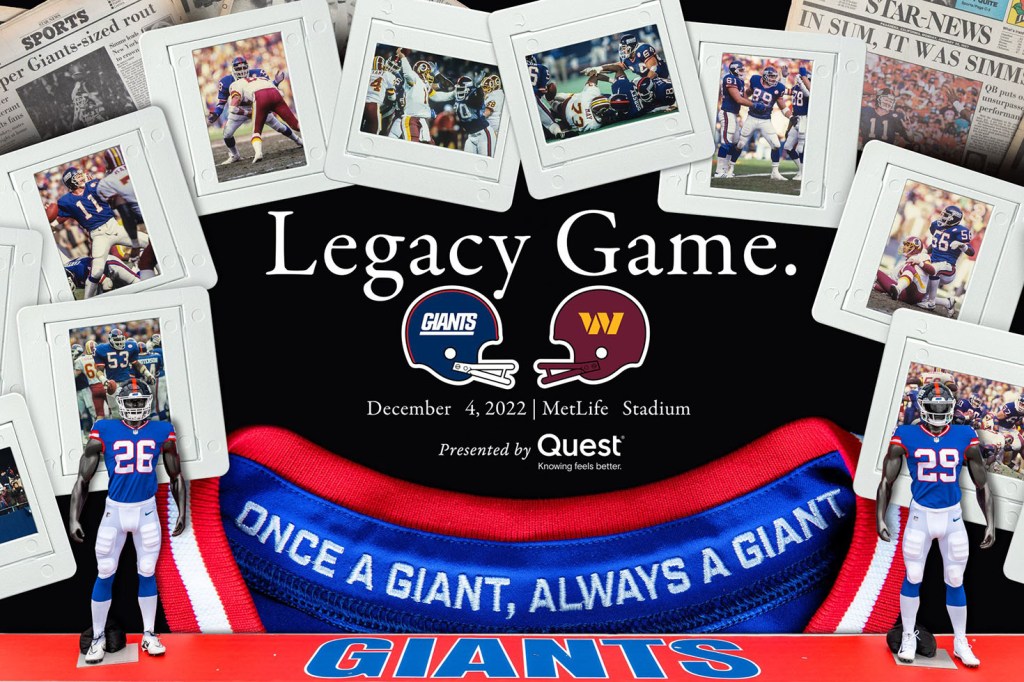 The game versus the Bears on October 2 was the first of two Legacy Games at MetLife Stadium hosted by the Giants’ marketing department as part of a special platform around the NFL. The second will occur on Sunday versus Washington, commemorating probably the franchise’s greatest “lunch-pail game” rivalry from the 1980s.

“It gives you goose bumps,” said Banks, who won Super Bowls with the Giants in 1986 and 1990 and is currently the booth commentator for WFAN’s radio broadcasts. “There was a whole emotional connection that you flash back to and then flash ahead to.”

The Giants are in the midst of releasing new uniforms for the next five years, building up to their 100th season in 2024. The idea was advanced this season when the NFL enacted a regulation allowing the use of a second helmet with non-standard home or away jerseys. Instead of just releasing a new helmet design for the 1980-1999 era, the Giants opted for a stadium-wide display of nostalgia.

The Giants’ Legacy Game will be against the Commanders.
@PeteGuelli/Twitter

Chief business officer Pete Guelli’s message to everyone involved was to make spectators feel as though they are entering the old Giants Stadium through a time warp. Similar to Week 2, the first 30,000 spectators will receive a game-day pennant on Sunday, and a 1980s musical group will perform during halftime.

It took about two years, through Week 1 of this season, to get the color and appearance of the jersey trim, pant stripe, nameplate, and heritage neckline on the Legacy Game jerseys just perfect.

Running back Saquon Barkley stated, “I want to be proud of the heritage, the history, and the culture here, and I want my name to go above the lockers with the other Ring of Honor members.” “This was a dream of mine when I was drafted here, and it does not go ignored when you put on those jerseys. The jersey accentuates the emphasis on tradition… and the sorts of players that have played here previously.”

The fan base has responded in a significant manner. Two of the Giants’ three most-engaged social media posts in 2022 are linked to the Legacy Games, and a third was just released this week.

“The jerseys and the red end zones reminded me of Super Bowl XXI,” observed Joe Ippolito, a season-ticket holder from Livingston, New Jersey, on October 2. I thought to myself, ‘This is Giants football’ Upon seeing that field, I thought, “There is no way we would lose today.”

Ippolito, 50, will be one of a select few season ticket holders present on Saturday for a Chalk Talk event featuring Phil Simms, Harry Carson, Rodney Hampton, and Banks. Angelo Chirichiello, his 14-year-old nephew, and he linked two generations of fans with a video of Lawrence Taylor and Charles Barkley announcing historic games.

Ippolito stated, “The era connects with everyone since it was the first Super Bowl and they took on the characteristics of the tri-state area.” “The underdog, blue-collar attitude. We were not foremost in anyone’s thoughts.”

Four reissued Starter brand “Legacy Collection” items that sold out within hours — the red jacket associated with defensive coordinator Bill Belichick, the Bill Parcells-favored sweater, a training-camp windbreaker, and a locker-room T-shirt — account for a significant portion of the increase. Banks is the sole Starter licensee for the garment brand he started, G-III Sports.

“The importance is so ironic because it was a period that established the benchmark for the Giants football we know today,” said Banks. “We went from a poor season to becoming a wild-card team in my first year, to progressing the next year, and then winning the Super Bowl. The reconstruction resembles what we are observing.

“I’m not anticipating any Super Bowls in the next two years, but they’ve placed themselves in a terrific situation with a new coach to be able to play in the postseason in a year in which nobody expected anything from them… Similar to when a group of rookies, including myself, were able to get the squad moving in the right path.

»In a tribute to the past, the Giants are hosting their second Legacy Game«