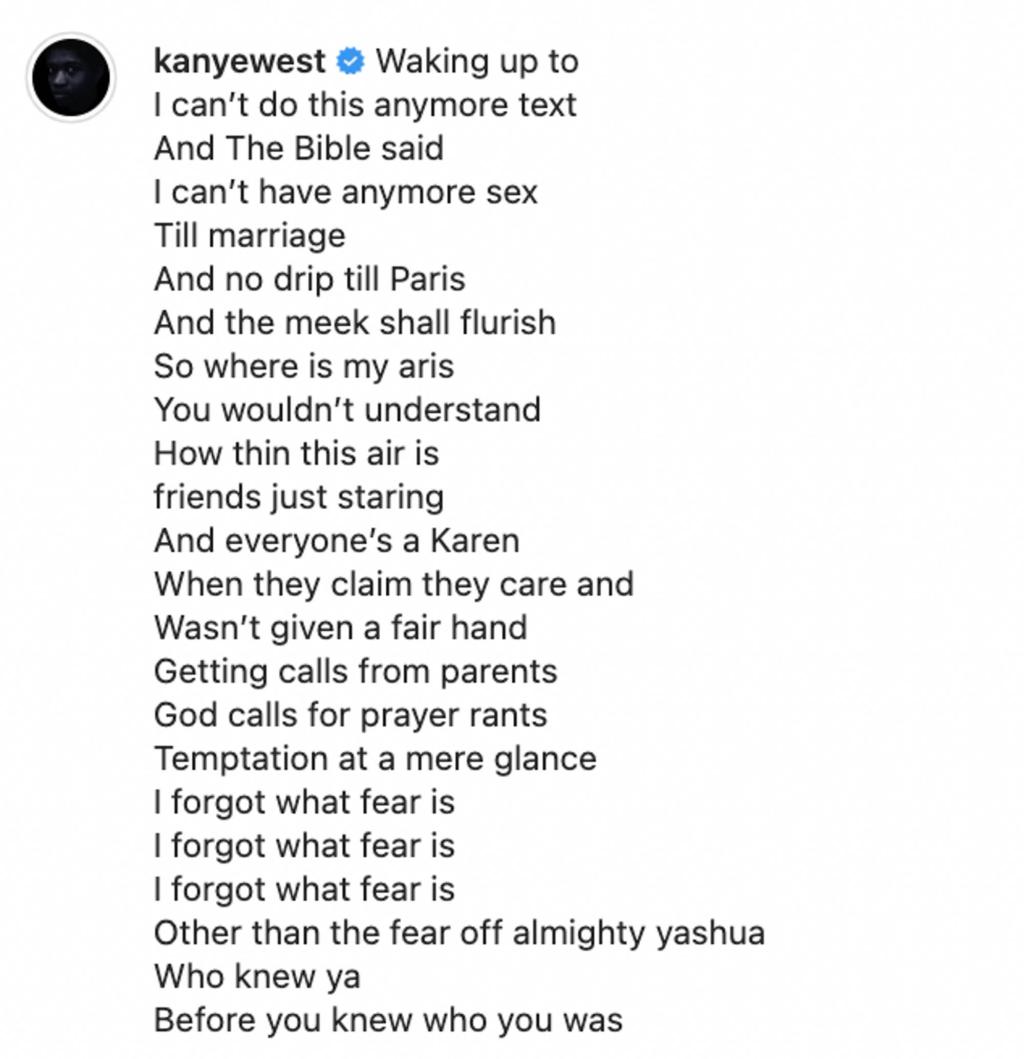 In a new song released on Instagram on Wednesday, Kanye West acknowledged his earlier anti-Semitic sentiments and pledged to refrain from sexual activity until marriage.

“Waking up to / I can’t do this anymore text / And The Bible says / I can’t have anymore sex / Till marriage / And no drip until Paris / And the meek shall flourish,” he captioned a violent photo in purple.

The verse continued, “And everyone’s a Karen / When they profess to care and / Wasn’t dealt a fair hand / Receiving phone calls from parents / God calls for prayer rants.”

The 45-year-old rapper said that his former girlfriends, including ex-wife Kim Kardashian and model Juliana Nal, left him because he was continuously in the “headlines.”

“You know sincerely / You all respect me / I am aware that the headlines are the reason why she wants to go.

West closed the song as follows: “I ain’t never rock with none of y’all no way / And I’m pulling up in that white OJ / And the watch filled up with Oshays / that’s Jackson because it’s nasty / Tweeted deathcon / Now we past three”

In the lyrics, the rapper made reference to his earlier anti-Semitic sentiments.
Instagram/Kanye West

The rapper appeared to be referring to his earlier unsettling tweets in which he threatened to go “death con 3 on JEWISH PEOPLE.”

Last week, West praised Hitler in an interview with “Infowars.”

The designer of Yeezy allegedly made similar anti-Semitic sentiments to a number of his former colleagues over the previous several years, despite the fact that his words startled many.

Although West apparently compensated some employees for their quiet, other unnamed former employees claim he “mentioned Jewish conspiracy theories and praised Hitler” during meetings.

Some of the former billionaire’s workers allege he used pornographic and explicit photographs of Kim Kardashian as a “intimidation tool” as a number of his former colleagues have come out with stories of his troubling conduct.

According to a Rolling Stone piece, one young professional remembers West giving him a “very intimate and personal” photo of the Skims founder on his phone at the outset of an interview.

»In a new song, Kanye West discusses abstinence till marriage and deathcon remarks«