Skip to content
Go Home «» News «» Breaking News «» In a fatal collision, a paramedic unintentionally treated her own daughter 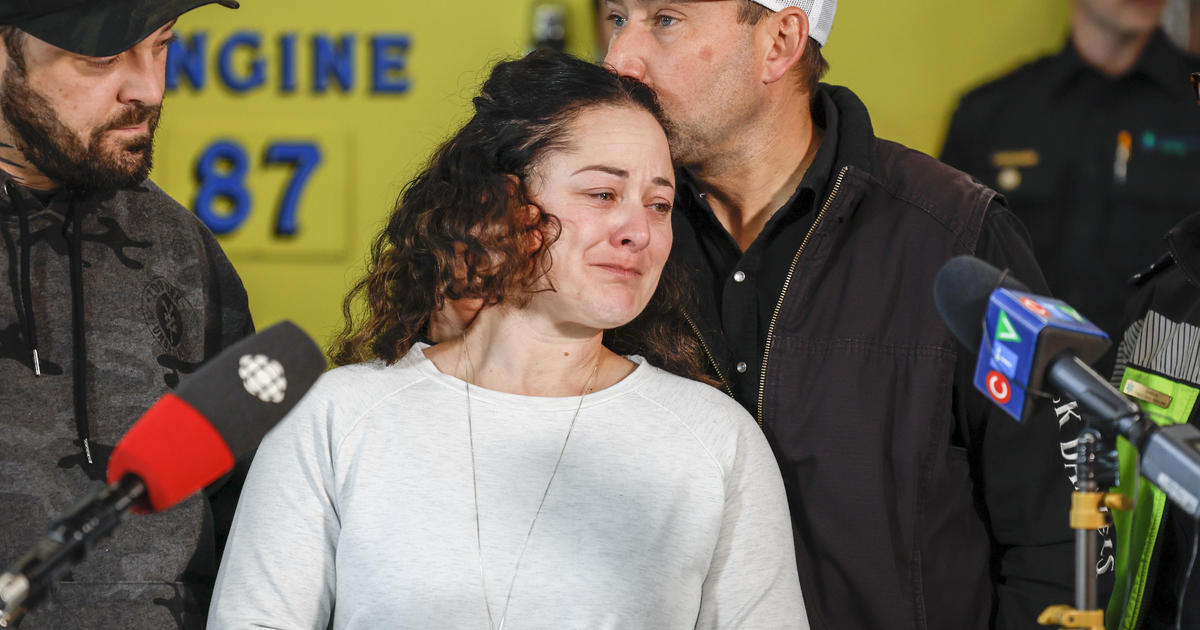 A Canadian paramedic who, unbeknownst to her, treated her own daughter after a terrible car accident wiped away tears as she recalled a lovely kid who battled till the end.

Jayme Erickson was dispatched to the accident north of Calgary on November 15 and sat with a girl who died after being extricated from the vehicle and transported to the hospital. She was unrecognizable due to her wounds.

When Erickson returned home at the end of the day, she was met by members of the Royal Canadian Mounted Police who informed her that the patient was her 17-year-old daughter, Montana.

Jayme Erickson, center, is comforted by her husband Sean Erickson as she addresses the media in Airdrie, Alberta, on November 22, 2022. Erickson was summoned to an accident last week and did not realize she was attempting to rescue her own daughter due to the severity of her injuries. AP/Jeff McIntosh

Erickson expressed her sorrow to reporters on Tuesday night, describing her daughter as a swimmer with dreams to become a lawyer who was successful in all she attempted.

“She was a fighter who fought till her death, and she was also gorgeous. She was very gorgeous. If she ever attempted something, she would always be successful “Erickson stated this while surrounded by relatives, paramedics, police officials, and firemen at an Airdrie firehall.

Richard Reed, a friend and flight paramedic, cried many times as he described Erickson’s presence at the scene where a vehicle had lost control and collided with an incoming truck.

Reed stated that the driver was able to exit the vehicle, however the female passenger was trapped and severely injured. Erickson was the first one to arrive. He stated that Erickson realized the child was in danger and waited until she was extricated and sent to the hospital in an air ambulance, oblivious of her identity.

“On the way back, she conveyed her sorrow and anger to her companion, knowing that a family will certainly lose their daughter, sister, and grandson in the future. Shortly after returning home, there was a knock at the front door. It was the RCMP that was responsible, “Reed stated.

“Upon entering the room, she discovered to her horror that the girl she had sat with in the back of the crumpled vehicle, keeping her alive so her family could say goodbye, and who was unrecognizable due to the severity of her injuries, was her own daughter,” he added. “Jayme kept her own daughter alive unintentionally.”

Last week, Jayme Erickson wrote in an emotional Facebook post, “My biggest dread as a paramedic has come true.”

She wrote, “The gravely injured patient I had just treated was my own flesh and blood.” “My only son. My mini-me. My daughter, Montana. Her injuries were so severe that I was unable to recognize her.”

With a heavy heart and unfathomable sorrow, I must write this letter to tell my friends and family of…

She stated, “Today we formally bid goodbye to my daughter.” “I cannot help but be enraged by the limited time I spent with her. 17 years was insufficient.”

»In a fatal collision, a paramedic unintentionally treated her own daughter«