Skip to content
Go Home «» News «» World News «» In a desperate bid to outrun cops, a robbery suspect races the WRONG WAY down A461 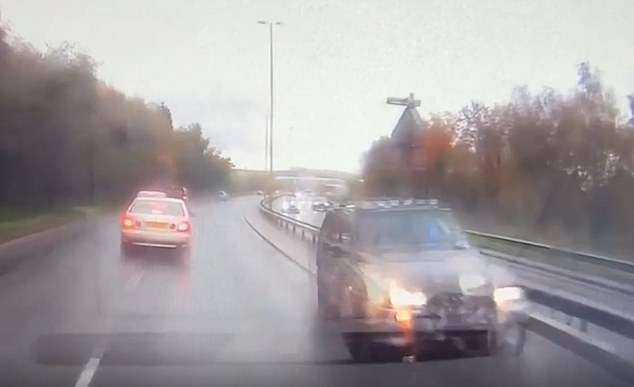 A motorist filmed the scary moment a car traveling on the wrong side of the road and attempting to elude police during a high-speed pursuit sped towards him and a line of cars.

Last week, Joe Anderson captured the heart-stopping footage on his dashcam while traveling south on the A461 in Dudley, West Midlands.

The footage shows the 30-year-old exiting a roundabout and travelling along the bypass in the right-hand lane behind several other vehicles.

The leading vehicles then proceed to pound on their brakes and veer into the left lane.

A black SUV suddenly enters Joe’s field of vision, its driver speeding into oncoming traffic while traveling in Joe’s way.

A motorist filmed the horrific moment a car traveling on the wrong side of the road and attempting to elude police during a high-speed chase hurtled towards him and a line of cars.

As he continues to drive in the incorrect way, the SUV ends up mounting the curb on the central reserve, which he then crosses.

To prevent a head-on collision, Firefighter Joe attempts to shift slightly into the left lane but is unable to do so owing to other automobiles.

As he continues to drive in the incorrect way, the SUV ends up mounting the curb on the central reserve, which he then crosses.

Several police vehicles are then seen pursuing the reckless driver on the correct side of the bypass.

Following the pursuit, police reported that they were able to apprehend three suspects in connection with over 10 robberies.

Joe from Horsham, West Sussex, said today, ‘It was definitely a shock, but I’m used to dealing with high-pressure situations in my daily job. It took me a moment to realize what had happened, and then my natural instinct kicked in.

I pulled over a few miles down the road to let it sink in, unable to fathom that someone could be so heartless as to imperil lives in such a way.

Last week, Joe Anderson captured the heart-stopping footage on his dashcam while driving south on the A461 in Dudley, West Midlands.

‘It was more of a surprise; it didn’t really set in until after the fact, and it’s not something you’d ever expect to occur.

“Almost everyone was able to avoid the collision, with the exception of the three vans on the roundabout. Fortunately, no one was injured or killed.’

Last week, West Midlands Police issued a statement regarding the chase: ‘Three people have been arrested in connection with more than ten robberies following yesterday’s police pursuit in #Dudley.

“At approximately 12:33 p.m., officers spotted a vehicle on Duncan Edwards Way that was believed to have been involved in an armed robbery in Bridgnorth.

The vehicle failed to stop before intentionally ramming police cars, driving at a traffic officer, and striking a police motorcycle.

Due to other vehicles, Firefighter Joe was unable to move slightly into the left lane to avoid a head-on collision.

‘Tactically, the suspects’ vehicle was brought to a stop to prevent further damage and risk to the public. Fortunately, no one was seriously injured, but there was extensive property damage.

Three individuals were arrested and taken into custody.

A 44-year-old man was arrested on suspicion of attempted murder against three police officers and robbery conspiracy.

In addition, he will be questioned in relation to eleven robberies committed in the West Midlands and West Mercia between July and August.

»In a desperate bid to outrun cops, a robbery suspect races the WRONG WAY down A461«