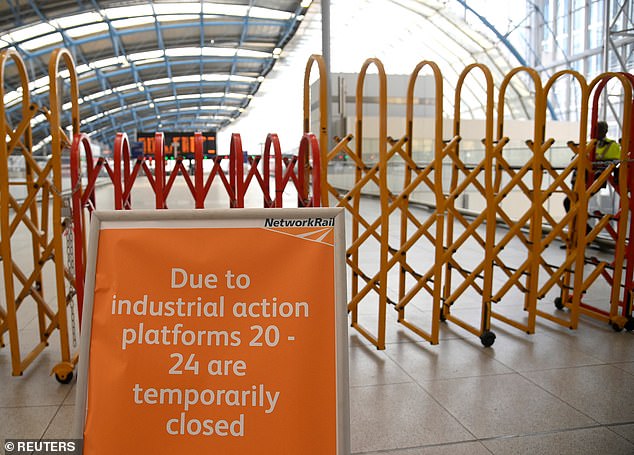 As Chancellor Kwasi Kwarteng proposes a new assault on crippling strikes, trade unions will be compelled to put pay proposals to a vote among their members.

This morning, in his “emergency budget,” Mr. Kwarteng promised new legislation to ensure that industrial action can only occur when negotiations between companies and unions “had truly broken down.”

The move of the Chancellor precedes a new wave of damaging rail strikes scheduled for this fall.

On the 1st and 5th of October, ASLEF-affiliated train drivers will launch nationwide walkouts, causing mayhem for those attending the London Marathon and the Conservative Party convention in Birmingham.

RMT has also threatened that they will “essentially shut down the railway network” on October 8 as part of their protracted conflict over pay, jobs, and working conditions.

Royal Mail employees are preparing strikes on September 30 and October 1, while the Royal College of Nursing is pushing its members to vote in favor of strike action in a poll scheduled for the following month.

Ahead of an impending “fall of discontent” – which follows significant industrial action by trade unions this summer – Mr. Kwarteng announced the latest preventative measures.

In an effort to alleviate the suffering of commuters, ministers have already announced legislation requiring transport firms to provide a basic service during strike action, as promised in the Conservative platform.

Today, the Chancellor went even further by announcing legislation that will require trade unions to engage their members on compensation offers prior to engaging in strike action.

The Chancellor of the United Kingdom, Kwasi Kwarteng, introduced new legislation to ensure that industrial action can only occur when negotiations between companies and unions have “really broken down.”

The action of the Chancellor comes ahead of another wave of damaging rail strikes scheduled for this fall.

RMT has threatened to “essentially shut down the railway network” on October 8 as part of a protracted conflict over pay, jobs, and working conditions.

Thus, we will follow suit. We shall proceed further.

We would force unions to put pay proposals to a vote of their members to ensure that strikes may only be called when discussions have truly broken down.

Ex-Cabinet minister: “Last is one of the sixteen-point plan I proposed this summer to combat “forever strikes,” and it means that four of the actions are now underway.”

Mick Lynch, general secretary of the RMT, predicted that Mr. Kwarteng’s announcement would “justifiably infuriate our members” because he asserted that the United Kingdom currently has “the strictest anti-democratic trade union rules in western Europe.”

The union leader continued, “The government should be working towards a negotiated conclusion in the national rail issue, not making it more difficult to take effective strike action.”

“RMT and other unions will not sit passively by or accept meekly any additional barriers to its members exercising their fundamental human right to withdraw their labor.”

Along with his decision on strikes, Mr. Kwarteng used his ’emergency budget’ to offer £45 billion in tax cuts in an effort to revitalize the British economy.

The Chancellor eliminated the 45p top rate of tax for anyone earning over £150,000 and brought forward a 1p reduction in the 20p basic rate of tax to April of next year.

In addition, he confirmed he would reverse the rise in National Insurance contributions, cancel the anticipated increase in Corporation Tax, and eliminate the bonus cap for City bankers.

Union leaders accused Mr. Kwarteng of ‘unrepentantly’ bolstering ‘the wealthy, big business, and the City’ despite the fact that public sector employees are facing a cost-of-living problem.

Sharon Graham, general secretary of Unite, stated, “Billionaires and city bankers will once again ponder which tax haven they will use to deposit their money, while millions of regular families struggle to make ends meet.

If billions of pounds are available for spending, the easiest approach to stimulate the economy would be to increase the salaries of public sector employees.

Gary Smith, general secretary of the GMB, asserted that the Chancellor preferred to funnel money into the hands of wealthy multinational corporations.

‘The Chancellor is tight on wage raises for care workers but lenient on bonuses for bankers — today’s news has cemented an economy skewed against working people,’ he said.

Our members demand an economic policy that benefits everyone, not just the swindlers and speculators who have benefited greatly from a Tory government.

The Chancellor had the opportunity to implement a new strategy, but he failed his first and most significant exam.