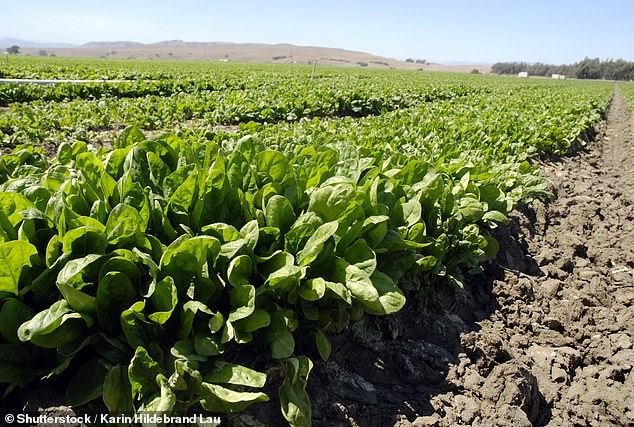 It has been found that the farm that supplied the young spinach that caused a number of Australians to have hallucinations was previously accused of poor weed control.

On Thursday, the Victorian grower Riviera Farms revealed that the deadly weed thornapple had contaminated a spinach harvest, causing over 200 people to experience hallucinations, delirium, and other poisoning symptoms.

Riviera Farms was accused of poor weed management and other faulty farming techniques in 2019 documents filed with the Supreme Court of Victoria as part of the farm’s legal case against pesticide manufacturers.

The grower responsible for the baby spinach poisonings was previously accused of inadequate weed control, according to court filings

Syngenta and Accensi filed the documents as part of their defense against a lawsuit filed by Riviera Farms, which claimed that their tainted pesticides rendered carrot and maize crops unsuitable.

Lander and Rogers, a law company in Victoria, submitted documents in which an expert identified the “presence of weeds and other invasive species in the crop-planted fields.”

According to records seen by The Age, spoiled produce from Riviera Farms in 2018 “was also caused or contributed to by its own negligence and failure to take due care.”

The issue was resolved through mediation, with neither party admitting fault.

A spokesman for Riviera Farms told The Age that the charges in the 2018 court case were not supported by the evidence.

The representative stated, “The accusation of some impropriety on the side of Riviera (or its management) in respect to the Supreme Court matter you mentioned is unfounded and is repudiated in the strongest possible terms.”

The baby spinach products of Riviera Farms (pictured) have been recalled following 200 reports of poisoning symptoms, including hallucinations.

SPINACH SIGNS TO WATCH OUT FOR:

Riviera Farms said that the herbicides slowed the maturation of its carrot and maize crops, resulting in reduced growth and ‘bleaching or scorching’ symptoms.

A representative for Syngenta told The Age that the business could not comment due to confidentiality concerns, but that the dispute had been resolved to the satisfaction of all parties concerned.

In a statement released on Thursday, Riviera Farms stated that only thornapple, commonly known as jimsonweed, was responsible for the poisonings and recall.

The representative stated that no other probable chemicals, herbicides, or other forms of contaminants had been detected.

According to our initial statement to the media and clients on Thursday evening, December 15th, no other Riviera Farms products have been affected by this weed.

As a preventive measure, neighboring spinach fields are currently being destroyed.

In Queensland, one kid was hospitalized, at least 20 Victorians sought treatment in emergency departments, and at least 60 people in New South Wales reported being ill.

Riviera Farms stated that it had notified all of its twenty clients of the recall.

However, they reported that Costco was their sole direct significant retail customer.

A recall has been issued after Costco, Woolworths, Coles, and Aldi removed Riviera Farm items from their shelves.

The nationwide recall involves bags of spinach supplied by Costco in New South Wales, Victoria, and the Australian Capital Territory with use-by dates between December 16 and December 28.

Customers who are concerned about their exposure to spinach can contact the Poisons Information Centre, while anyone experiencing unusual or severe symptoms should seek medical assistance immediately.

290g Chickpea Falafel from Woolworths with use-by dates of December 20 and December 22.

Victorian shops’ 450 gram packs of The Fresh Salad co-branded Fresh & Fast Stir Fry with expiration dates up to and including December 24.

Bags of spinach sold in NSW, Victoria, and the ACT with use-by dates between December 16 and December 28 are recalled.

»In 2018, Riviera Farms defended itself against claims of inadequate weed control in a baby spinach recall«