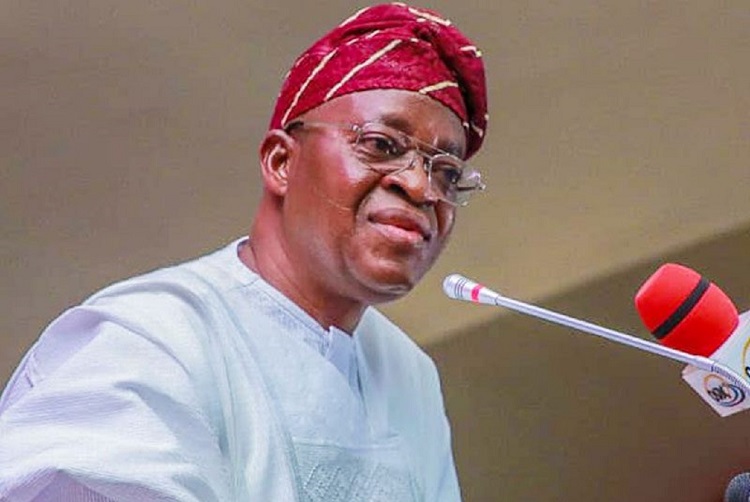 Osun Governor, Adegboyega Oyetola says the State is fully ready for the smooth take-off of the recently approved Federal University of Health and Medical Sciences, Ila-Orangun in the Ila Local Government Area of the State.

He disclosed that as part of efforts to ensure that academic activities commence at the institution in September 2022, the State government had since approved for use, part of facilities at the College of Education in lla as a temporary site of the specialized University.

Oyetola revealed that the government had also approved land for the citing of the University’s permanent site, adding that the survey of the land would be soon completed.

He made this known when he received at his office, the technical team from the Federal Ministry of Education who are in Osun to kick-start process for the establishment of the University. The team informed the Governor of the FG’s determination to ensure the institution takes off by September.

Responding, Oyetola said the state government was prepared to support FG’s efforts to actualize the dream of establishing the specialized university which he said, would enhance healthcare delivery in the State and also complement his administration’s efforts to revitalize the health sector.

He, therefore, commended President Muhammadu Buhari for considering Osun worthy of having the institution.

“We shall do all within our power to ensure that the Federal Government achieves its vision for establishing the University.

“Ila Orangun, the host community is one of the most ancient towns in Yoruba land. Agitation for university for the community has been on for about 45 years. Therefore, President Buhari-led administration has recorded a great history by this singular gesture.

“Apart from the economic gains to lla in particular and the State in general, Osun, through the University is now a base for developing health specialists, which is an opportunity for our youth to become professionals in this area.

“As a Government, to demonstrate our commitment to this laudable project, we have given approval for the land and the Survey process will soon be completed.

“To ensure the institution takes off this September, we have also approved for use part of the College of Education in lla, as a temporary site. And to the best of my knowledge, no request from the institution has been turned down by us.

“As you are all aware, Osun is noted for award-winning endeavors and excellence in numerous sectors, including the health sector. I assure you that the Federal University of Health Sciences, lla Orangun, is in safe hands and will naturally flow into the excellence for which it is founded “, the governor said.

Successful implementation
Earlier, the leader of the Technical Team who doubled as the Director, University Education, Federal Ministry of Education, Abuja, Mrs. Rakiya IIyasu, said the essence of the visit to Osun was to evaluate the level of preparation for the successful take-off of the University.

Mrs. IIyasu described the decision of the FG to establish the new universities as a noble intent to reduce medical tourism and lay a solid foundation for building national preparedness and resilience in anticipation of future challenges in the health sector. He added that the successful implementation of the project would go a long way to address the menace.

“The approval of the new tertiary institution was aimed at improving the health system because if we don’t have the training ground here, we will still be lagging behind. The shortfall noticed in medical care is huge. When Ebola came, we were handicapped because we didn’t know how to handle it so also when the pandemic came, we were challenged and for this reason, we need to train our personnel, we need to build experts that will deal with these health matters. Also, to reduce medical tourism, you will agree with me that we spend a lot of money on medical tourism.

“If we are able to get this right, it will reduce our currency that has been flown outside. So, we are here today to visit the site and take it over. This has been done for the other three universities and essence is to see the site and to know the amount of land available because the university is not to build it today but it is an ongoing. We need to know whether we are going to have permanent site or temporary.

“Less I forget, I must remind us that Mr President had approved N5billion as takeoff grant for the establishment of the universities which will be sourced from Tetfund. But we need to partner the State to complement this effort of the FG so as to kindly provide for the immediate takeoff of the university.”