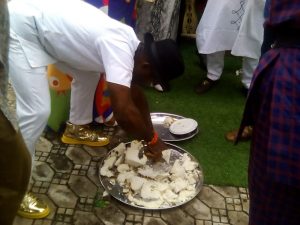 The Traditional ruler of Alor, Igwe MacAnthony  Okonkwo, has celebrated his seventh Iwa Ji Festival as the Igwe Alor.

The annual festival, during which some illustrious sons of the community were conferred with chieftaincy titles, was held at the Igwe’s palace, Umuokwu Village, Alor, in Idemili South Local Government Area of the State, and attracted dignitaries from all walks of life, who were entertained with  different dance and masquerade groups, showcasing the rich cultural heritage of Alor community.

Speaking at the event, Igwe Okonkwo expressed gratitude to God for a bountiful harvest, inspite of economic and health challenges that bedeviled the country in the recent time, and prayed for good health, peace and long life for the people of the community.

He declared that the people of Alor community are now free to eat new yam, and called for peace to reign in the community.

Speaking to the ABS, the Traditional Prime Minister of Alor, Chief Dr. Ben Udeze, expressed joy and thanks to God for the successful Iwa Ji celebration, and prayed for peace and unity in Alor and the country at large.

On his part, the Traditional ruler of Umuawulu in Awka South Local Government Area, Igwe Joel Egwuonwu, congratulated Igwe Okonkwo and the entire Alor community for the successful celebration, and prayed God to grant the Igwe a peaceful reign.

Staff reporter Emengini Osadebe reports that highpoints of the festival include cutting of yam and conferment of Chieftaincy titles to some illustrious sons of Alor by Igwe Okonkwo, as well as payment of homage to the Igwe.