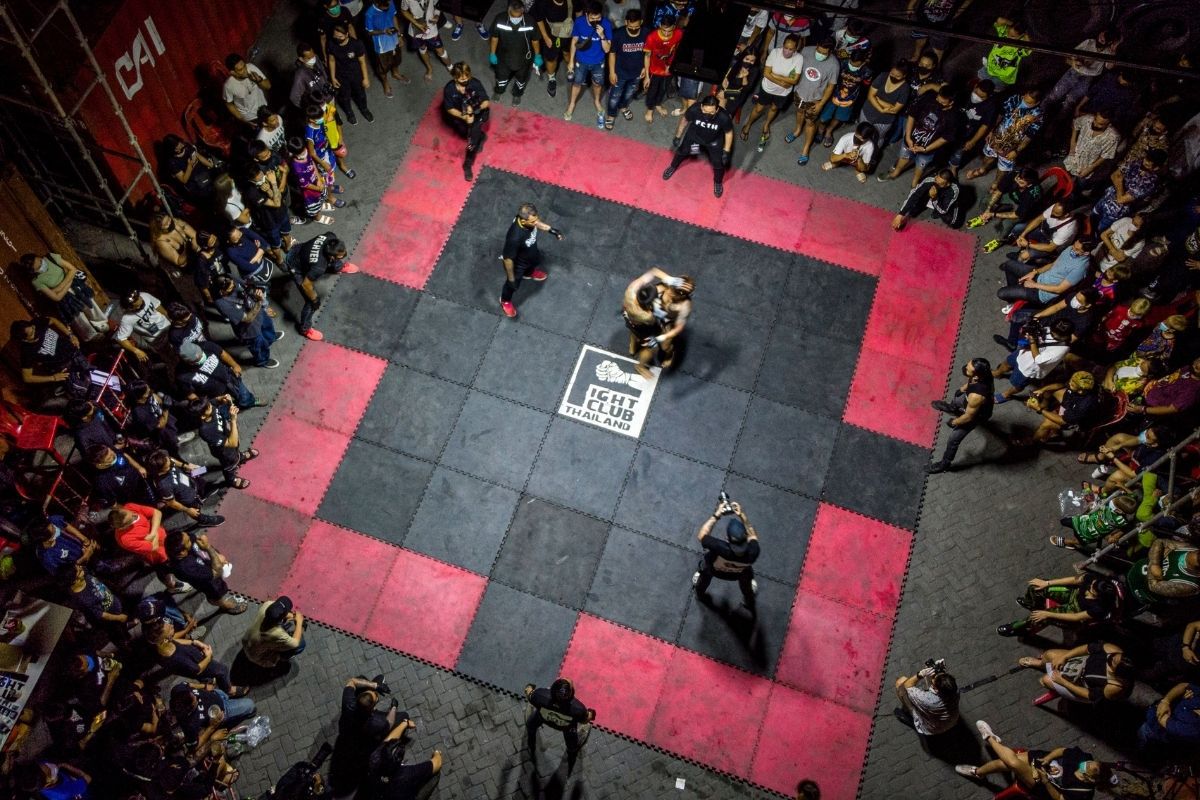 Harsh spotlights and street lamps illuminate a vicious brawl between two furious shirtless men as the screams of a crowd echo beneath a Bangkok underpass: Fight Club Thailand is on.

In the capital city of a country renowned for its highly technical martial arts scene, amateur fighters gather regularly promising to exchange only blood and bruises in the underground club.

While the bout resembles a particularly frenzied boxing match, the setting – surrounded by shipping containers in a poor port-side neighbourhood – is a far cry from the glitzy charms of Muay Thai boxing stadiums.

“Here you don’t have to know how to fight. You just need to have heart and that’s it,” club co-founder Chana Worasart told AFP.

The 30-year-old founded the club in 2016, partly inspired by the cult Brad Pitt movie, to allow amateur fighters to test their skills – or just vent their aggression.

“I think the popularity is due to a variety of occupations and fighting styles that are different from the styles in the (professional) ring,” he said.

“It’s quite different (from traditional fights),” he told AFP, expecting to dish out – and absorb – punishment using all four limbs.

Plus, he added, “fighting with containers surrounding us is just fun and exciting.”

FIGHT CLUB THAILAND: ‘THE RING THAT WILL CHANGE VIOLENCE INTO FRIENDSHIP’

Unlike the movie’s famous line banning fighters from talking about their club to outsiders, the Bangkok-based outfit calls itself “the ring that will change violence into friendship”.

The group has become a local sensation, with a private Facebook group racking up 73 000 members as word spread of the underground matches.

Fighters are allowed to go all-out in a single three-minute round – with neither a winner or loser declared – but the bouts aren’t quite no-holds-barred.

Elbowing, grappling, throwing opponents to the ground and punching to the back of the head are strictly prohibited.

Unsurprisingly, the gatherings have not escaped the notice of the Thai police.

Authorities were alerted in 2016 to the underground matches – which allegedly violated the Boxing Act, punishable with a one-year jail sentence and fines of up to about $600 (R9 534) – but despite a small police presence on occasion, the fights have continued.

Meanwhile, the club insists it is not governed by the Boxing Act, meaning organisers are not holding unsanctioned fights.

Co-founder Chana says the group is approved by the Department of Provincial Administration.

“I don’t oppose the idea of turning this into legal, sanctioned fights, but at the same time, we can’t lose the underground identity, so the question is ‘where is the balance?’”

FIGHT CLUB THAILAND DOESN’T ASK FIGHTERS TO KILL EACH OTHER

It is all a far cry from the scrappy club’s beginnings when there were no clear rules.

Now there are fighting guidelines, screening procedures, a risk-acceptance pledge as well as protective equipment and on-scene medical care.

“We don’t ask fighters to kill each other. If you’re too tired or too injured to go on, then we’ll stop the fight,” said Chana as another bout began.

After paying his respects with folded hands and touching gloves with his opponent, amateur fighter Ilya Ostroushchenko gets to work.

Landing a kick to his opponent’s torso, Ostroushchenko bashes out a combination of punches, and a left hook to the face finally sends his opponent stumbling to the rubber mat.

The crowd enthusiastically roars “Somchai” – a traditional, masculine Thai name given to the Russian – as the bout finishes.

Seemingly cool and composed during the fight, the 22-year-old Russian told AFP it is nerve-wracking right before stepping into the informal ring.

“My hands shake. My knees shake also, but when I go out to the centre, I feel good,” he said.