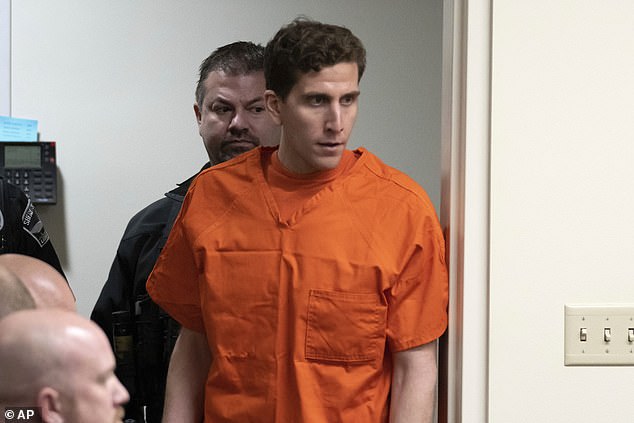 The man accused of killing four students at the University of Idaho had an interview with the police department that eventually assisted in his capture.

According to the New York Times, which obtained the emails, Kohberger followed up their encounter with a glowing email indicating that the accused planned to earn a three-year research assistant position in public safety.

Kohberger commented, “It was a pleasure to meet with you today and share my thoughts and enthusiasm regarding the research assistantship for public safety.”

Bryan Kohberger (seen on January 5), who is accused of killing four students at the University of Idaho, was interviewed by the police department that later assisted in his arrest.

I really anticipate hearing from you. Regards, Bryan,’ he concluded.

‘Great to see and speak with you as well,’ reportedly said police chief Jenkins.

WSU, where Kohberger was pursuing a doctorate in Criminology, advertised the graduate research post.

Inside Edition said that according to the job description provided by WSU, the goal of these roles is to support each agency through data management and analysis and position them for success when they seek external financing.

It was unclear whether this was the identical position mentioned in the probable case affidavit filed in the inquiry into the killings of Madison Mogen, 21, Kaylee Goncalves, 21, Xana Kernodle, 20, and Ethan Chapin, also age 20.

When Kohberger applied for an internship with the Pullman Police Department in the fall of 2022, he submitted an essay.

According to Inside Edition, the suspect said in the essay that he was interested in helping rural law enforcement agencies better collect and evaluate technical data for public safety operations.

According to the emails, Kohberger was one of four candidates under consideration.

It was also unclear whether he was offered the position, which was scheduled to begin on August 22.

The four University of Idaho students were stabbed to death in their Moscow residence in the early hours of November 13.

The Pullman Police Department did not reply to calls for comment, according to Inside Edition.

It was unclear whether the post Kohberger was looking for was the same position mentioned in the probable case affidavit submitted in the inquiry into the killings of Madison Mogen, 21, Kaylee Goncalves, 21, Xana Kernodle, 20, and Ethan Chapin, 20. (pictured)

On November 13, in the early hours of the morning, four University of Idaho students were murdered in their Moscow house (shown).

The same police department assisted in the location of the suspect vehicle and conducted the search of Kohberger’s on-campus WSU residence and the office he shared with two other teaching assistants, hours after his December arrest.

Tuesday, released court documents showed that investigators discovered discolored bedding, what seemed to be hair, and a single glove during a search of Kohberger’s WSU student residence, but no weapon.

Eight hair strands and a ‘possible’ animal hair were retrieved from the apartment, according to court documents.

A Fire TV stick, a nitrate-type black glove, a Walmart ticket with a single Dickies tag, two Marshall’s receipts, and a dust canister from a ‘Bissell Power Force’ vacuum were also retrieved.

All of the things are currently being stored at the police department at Washington State University.

The authorities apparently wanted to determine whether Ms. Goncalves’ dog’s hair had been “transferred” onto Kohberger and then back to his residence.

Kohberger dined at a Greek restaurant where two of the students he is accused of murdering worked as waitresses, as was revealed last week.

Mogen and Kernodle had worked for years at the Moscow eatery Mad Greek.

At least twice before to their murders, Kohberger visited the restaurant and ate vegan pizza, according to a former employee.

This is the latest in a series of revelations that show Kohberger may have been following the students.

It was discovered on Thursday that a suspect-associated Instagram account had followed three of the victims: Mogen, Kernodle, and Goncalves.

Police conducted a thorough search of Kohberger’s apartment in Pullman, Washington, for evidence related to the continuing investigation into the deaths of four Idaho students.

According to the complaint, Kohberger (pictured) submitted an essay when he applied for an internship with the Pullman Police Department in the fall of 2022.

Since his arrest late last month, numerous bogus Instagram profiles purporting to be Kohberger have arisen, however People Magazine quoted a source acquainted with the criminology graduate student’s authentic account.

The magazine did not identify the account, but stated that it had been removed from the service, as Instagram’s parent firm Meta frequently does for suspects in high-profile violent crimes.

Last week, experts suspected that suspect Kohberger may have left a knife sheath at the crime scene as a calling card.

The ‘brutality’ of the crime was also cited as evidence that he may have killed before.

The trial attorney Mercedes Colwin stated on The Dr. Phil Show that the Kabar knife sheath discovered at the crime site may have been purposely left there, noting that it is not uncommon for murderers to leave a personal mark at the scene of a murder.

Colwin, who joined on the show with DailyMail.com senior reporter Caitlyn Becker to dissect the case, adding that it would not be out of character for a murderer, ‘especially if you think you’re smarter than everyone else,’ as Kohberger does, according to Colwin.

Jonathan Gilliam, a retired FBI special agent, stated that the ‘viciousness’ of the ‘butchering’ led him to believe that Kohberger had’most certainly’ committed violent crimes prior to the Idaho murders.

‘I believe he’s been killed before,’ he stated. Not four, but I believe he has previously stalked and perhaps murdered females.