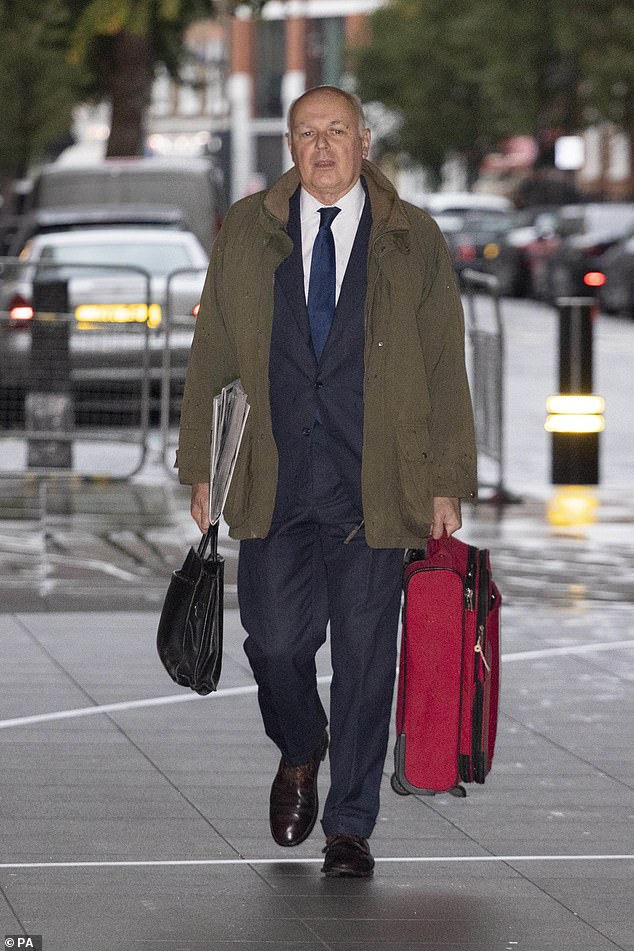 Sir Iain Duncan Smith, a former leader of the Conservative Party, testified in court that he worried for the safety of his wife and her friend when a traffic cone was’slammed’ onto his head as a group of ‘threatening’ demonstrators hurled insults at him.

Sir Iain described to a district judge how he was subjected to a ‘cacophony of sound’, a drum, insults, and abuse as he walked with his wife Betsy and one of her friends from the Midland Hotel to the Mercure Hotel in Manchester city centre on October 4, 2021, during the Conservative Party conference.

The 68-year-old member of parliament said he turned around after the cone was’smacked down’ on his head and told the group, ‘you are pathetic’, before his party headed to the Mercure, where he was scheduled to speak at a fringe gathering about Brexit and other topics.

He stated that he found the demonstrators to be “strangely menacing” and that he was particularly concerned for the safety of his wife and Primrose Yorke’s friend.

The lawmaker stated that the demonstrators “frightened me and those with me.”

Monday in Manchester Magistrates’ Court, he stated, ‘During my career as a politician, I have witnessed numerous protests.

Typically, I’m not terribly concerned. Typically, people make their points without being intimidating.

This, I felt, was threatening, plain and simple. I believe they intended to be threatening.

Sir Iain stated before the court, ‘It was menacing, it was abusive, and my wife and her friend felt it the most.’

The representative testified at the trial of Elliot Bovill, 32, of unknown address, who denies common assault.

Bovill is on trial alongside Radical Haslam, 29, of Manchester, and Ruth Wood, 52, of Cambridge, both of whom deny using threatening, abusive, or insulting words or conduct with the aim to cause harassment, alarm, or distress.

Sir Iain testified in the small, contemporary courtroom while wearing a dark suit, white shirt, and Brigade of Guards tie. He sported a poppy and a ribbon in favor of Ukraine on his lapel.

The court was shown CCTV footage of the moment the cone was placed on Sir Iain’s head as he and his company crossed a narrow side street.

The former cabinet minister recalled, “A traffic cone was pushed onto my head.”

He stated, “I was halfway over when I felt this blow on the back of my head and neck.”

I could feel something happening to it, which caused my head to fall forward.

Sir Iain reported that he removed the cone from his head and turned around.

He informed the court, “I had no idea who was responsible.” I said, “You are pathetic,” and dropped the cone.

Sir Iain stated, “It had landed rather forcefully on my head.”

They must be legitimate traffic cones and weigh a particular amount.