Skip to content
Home » News » News » ‘I think there are real problems with Trump.’ – Nigel Farage in Piers Morgan’s video 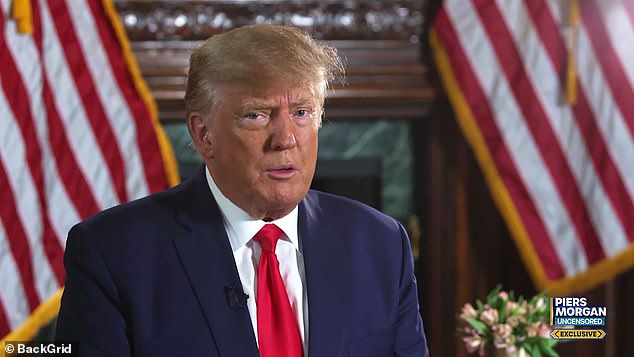 In the ‘leaked’ clip at an unknown event, the former UKIP and Brexit Party leader can be heard saying: ‘I think there are real problems with Trump.’

He wrote: ‘Leaked footage of ⁦@Nigel_Farage being shockingly critical about his supposed friend Donald Trump.

‘Can you make sure your Dad sees it, @DonaldJTrumpJr⁦⁩ – just thought you should both know what a treacherous disingenuous little snake you’re dealing with.’

It is unclear where or when the footage was taken, however Farage’s references to Hilary Clinton and his remark that ‘it looks like Trump’s going to win’ suggest the video was recorded during the 2016 presidential election.

Farage can be heard saying: ‘Whilst Trump puts his finger on some things that do need to be said, I find that there is a certain sense of anger about Trump.

‘There’s a certain sense that he’s only got one gear. And he also seems to believe in a bigger state and has a lot of ideas that I wouldn’t necessarily call Republican.

‘If Trump’s the nominee – he’s saying good things about security – there’s much about the rest of his agenda and his manner that I find pretty worrying.’

During the clip, one audience member also references Trump’s opinions on abortion saying ‘I will never be able to vote for an idiot like that,’ as Farage responds: ‘There are real problems with Trump.’

It comes after Trump released an audio recording that seemingly refuted an edited video clip that appeared to show him storming out of a sit-down interview with Piers.

A 30-second trailer, released on Wednesday, depicted Trump abruptly ending the interview after Morgan challenged Trump’s stolen election claims and ordering the crew to ‘turn the cameras off’ as he gets up from his chair and storms off. ‘Very dishonest,’ he mutters.

But the audio recording, provided by Trump’s spokesman to NBC News, indicates that the interview ended with the two men thanking each other for a ‘great interview’ and laughing, with no sign of Trump storming off the set.

Trump communications director Taylor Budowich claims the video trailer was deceptively edited by splicing audio of Trump saying ‘turn the camera off’ over video of him standing up, to make it look as if he abruptly cut off the interview.

The British commentator Morgan recently signed a comprehensive deal with Fox News parent company News Corp – and the trailer was intended to promote an interview airing next week on News Corp outlets around the world.

The sequence depicted in the video matches Morgan’s dramatic description in a column for the New York Post, which is also owned by News Corp.

Morgan wrote that the interview ended with Trump ‘abruptly jumping to his feet, looking hateful, and barking at the shocked crew: ‘TURN THE CAMERAS OFF!”

‘Then he turned on his heel, and sloped angrily off through a side door, loudly muttering, ‘SO dishonest …’ added Morgan.

But according to NBC, the audio provided by the Trump camp shows the interview actually ending with Morgan saying: ‘That was a great interview.’

‘Thank you very much. I really appreciate it,’ Morgan says.

It’s at that point in the audio that Trump is heard saying, ‘Turn the camera off.’