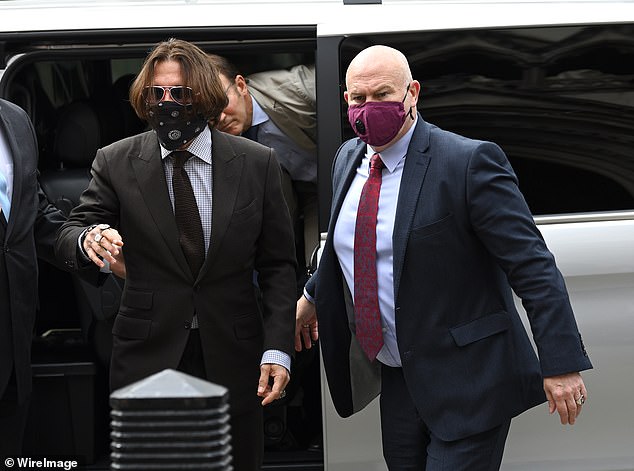 The defamation trial involving Johnny Depp and Amber Heard took a hilarious turn when the Pirates of the Caribbean star’s former bodyguard took the stand and was asked if he had ever seen the actor’s penis.

In a Zoom testimony, Malcolm Connolly was asked about whether or not it’s true that Depp was urinating in the foyer of the couple’s home in Australia during an argument in 2015.

Connolly reduced the courtroom to hysterics when he said, ‘I think I would remember if I’d seen Mr. Depp’s penis.’

The alleged urinating incident sparked a fight between the couple that led to Depp having the top of his finger severed.

Depp, 58, is suing Heard, 36, in Fairfax, Virginia, for $50 million on over a 2018 op-ed she wrote about domestic violence for The Washington Post. Although not named in the piece, Depp’s lawyers maintain that it’s obvious Heard was referring to him when she spoke of the abuse she suffered.

Heard countersued Depp for $100 million, alleging that he was behind a concerted effort to have her fired from Aquaman and as a spokesperson for L’Oreal. Connolly was questioned about how Depp and Heard got along during the early part of their relationship. The Scottish security man described the pair as ‘lovey-dovey’ and Heard as ‘lovely, charming.’

Though Connolly said that things began to change over time with Heard beginning to wear the pants in the relationship, as he put it.

When asked about the couple’s infamous trip to Australia in 2015 when Depp’s finger was severed, Connolly said when he came upon their argument it was ‘chaos.’

Heard was screaming at Depp, calling him a ‘coward,’ while the Edward Scissorhands star nursed his finger, according to Connolly.

eard’s lawyer maintained that Depp had been trying urinate in the foyer of their Australian home, saying the actor ‘had his penis out’ in the midst of the fight.

Connolly shot back saying, ‘I think I would remember if I’d seen Mr Depp’s penis.’

That prompted laughter from nearly everyone in the courtroom, although Heard remained stoic throughout.

A recording was played in the court around this time in which Depp could be heard saying that Heard made him ‘feel sick.’

The alleged peeing incident was also brought up in 2020 during Depp’s libel lawsuit against The Sun newspaper in London.

During that hearing, Heard alleged that in 2015, Depp relieved himself inside of their Australia home.

Heard said in 2020 that Depp, ‘was trying to write my name peeing on the walls and carpet walking through the house.’

Heard described the time she spent with Depp in Australia as ‘the worst thing I have ever been through.’

In his testimony in the 2020 lawsuit, Connolly said that he heard Depp shout, ‘Look at my finger! She’s cut my f*****g finger off! She’s smashed my hand with a vodka bottle.’

At that time, Connolly said that he lied about how Depp hurt his finger in order to protect Heard.

Connolly, a former prison guard, said remotely from his home in England in April 2022 that he witnessed Heard throwing a cigarette lighter and a soda can at Depp, during the couple’s tumultuous relationship. In addition, Connolly said that he noticed scratches on Depp’s face.

The Black Mass star was ‘not happy’ on the couple’s honeymoon, according to Connolly.

Connolly quipped about noticing swelling under Depp’s eye during their honeymoon, ‘He’s walked into a door, or a door’s walked into him.’