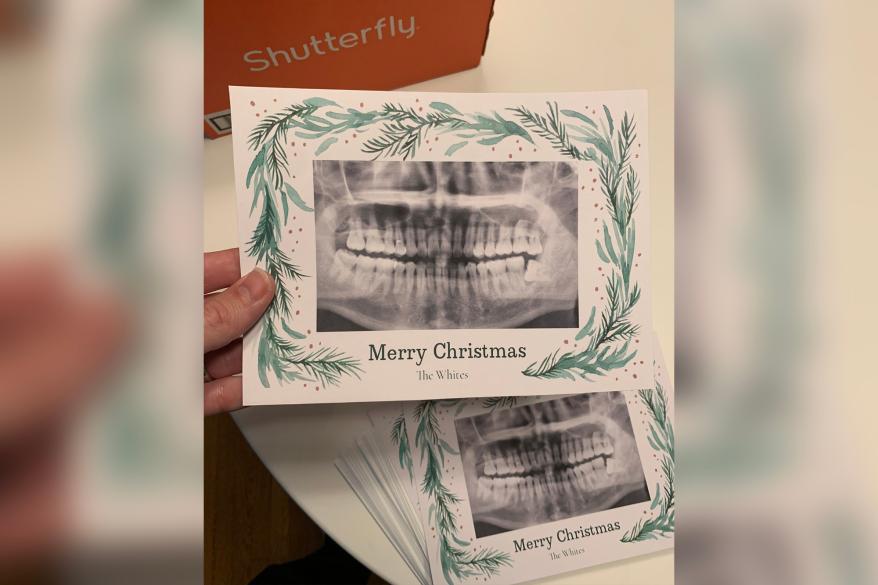 He fantasizes about a snowy Christmas.

“Selected the wrong photo from my camera roll, so now I have 90 of these,” Dan White, a 33-year-old photography gaffer, tweeted with horrific X-ray images of teeth. Inadvertently producing a funny double entendre, the writer from Los Angeles signed the note “Merry Christmas: The Whites.”

Jam Press stated that the Christmas-ray event occurred when White was preparing Christmas cards with Shutterfly, a picture printing program that allows users to select photos from their camera and add their own text, font, and clipart. However, things went awry when he inadvertently chose Mike’s dental x-ray when retouching the photographs.

White claimed in a subsequent tweet that he kept the photos on his phone because Mike “had such fantastic teeth” and he wanted to show his dentist an x-ray and say, “Give me this.”

Unfortunately, the wordsmith did not discover anything was amiss until 90 “tooth-bearing” playing cards were sent to his home.

Twitter naturally had a field day with the man’s “white Christmas” gaffe.

“Merry Christmas from the whites of your teeth,” said a Twitter wit. “With a smile like that, you have to flaunt it.”

“On the ninetieth day of Christmas, my true love exclaimed to meee, ‘Under my treee is a complete set of teeth!'” one participant joked with another.

Even the program White used to produce the cards, Shutterfly, commented on the error.

Others, however, believed Mike’s snack-gnashers were less than perfect, with one critic stating that “this Wisdom Tooth chose violence.” They also provided a close-up of the purportedly rotten tooth.

Even Shutterfly commented on the incident, stating, “Oh no! We are so sorry to hear about your cards! Let’s determine how we can assist today!

They added, “Please give us a direct message with your order number, email address, and the same information here so we can assist you.” “We anticipate hearing from you!”

Despite saying that his wife Kelly was “going to kill him” over the error, White has learned to see the humor in the situation, according to Jam Press.

However, he adds he has no plans to send the Christmas-rays to his friends and family in the near future.