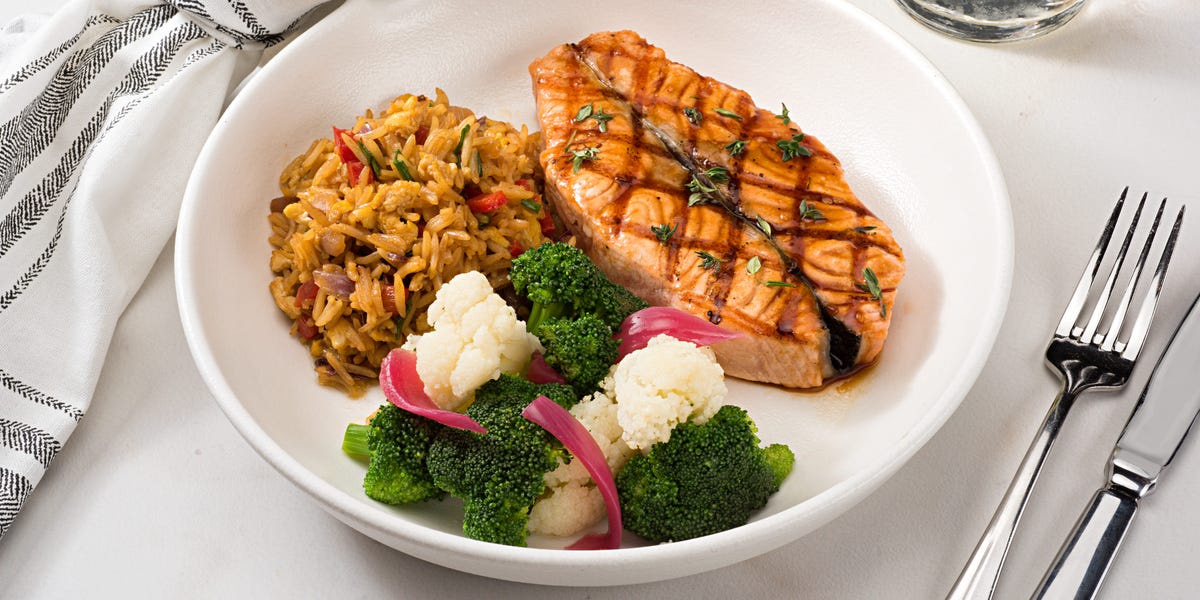 Austin, age 30, submitted his diet to Insider’s Nutrition Clinic, where experienced dietitians and nutritionists offer advice on the eating habits of readers.

According to Insider, he desires to “become shredded but also bulk up.”

Austin stated, “I am seven feet tall and have never truly “filled in” my enormous wing span.”

Austin is a courier who drives for a living yet exercises six to seven times per week. He added that he lifts weights four times each week and rows or jogs for the other two sessions.

According to Austin, intermittent fasting helped him drop 70 pounds in 2020.

Dr. Emily Werner, a registered sports dietitian, analyzed Austin’s diet and told Insider that his workout will help him reach his goal, but he must also feed himself appropriately, and his diet lacks variety.

He stated that Austin does not eat breakfast.

He stated that on most days he prepares one enormous lunch consisting of 1.5 to 2 pounds of seafood, vegetables, and brown rice. This is what Austin consumes during the day. On days where he lifts, he eats immediately afterward.

He stated that Austin frequently takes an afternoon nap and then finishes his dinner thereafter.

On cardio days, he often consumes his one large meal at 3 p.m.

Austin consumes between 150 and 200 grams of protein each day, primarily from fish, but also granola and protein bars, as he stated.

Austin stated, “sometimes, due to work, I have a substantial amount of protein shortly before night.”

Werner stated that it is difficult to simultaneously gain muscle and reduce fat in order to “become shredded” due to their contradictory calorie needs. Muscle growth demands an excess of calories, but fat reduction requires a deficit.

Werner said that Austin’s high-protein diet is the way to go if he wants to maintain his muscle mass while shedding weight.

However, Austin should not rely too heavily on fish.

“Although fish is an excellent source of lean protein with extra health benefits such as omega-3s, he should not overconsume fish due to the probable mercury concentration,” Werner said.

She suggested consuming fish two to four times per week, along with other sources of protein on the other days.

Werner stated that Austin’s diet needs more diversity because he is likely lacking micronutrients, which could lead to nutrient deficiencies and negatively affect his training efforts.

A balanced lunch consisting of steak, potatoes, and veggies is another way to add variety to your diet.

Salmon with broccoli and brown rice, chicken thighs with green beans and roasted root vegetables, and steak with roasted peppers and potatoes were among the recommended dishes.

Werner suggested that Austin may benefit from rotating his snacks.

She suggested snacks containing both protein and fruits and vegetables for fiber and antioxidants, such as Greek yogurt with fruit and nuts or seeds, cottage cheese with carrots, or a protein smoothie made with milk, whey protein, and fruit ice.

She said that if Austin enjoys consuming protein at night, these could be an excellent option before bed.

Werner stated, “For someone who regularly exercises, energy and muscular recovery are quite important, and food plays a significant role in this.”

“His diet should consist of a variety of fruits and vegetables rich in antioxidants and anti-inflammatory vitamins,” Werner advised.

While a balanced diet should supply Austin with all the nutrients he requires, he may wish to seek dietary supplements to enhance his recuperation and fitness.

Elite athletes have utilized collagen, creatine, and sour cherries for decades, according to Werner. “Incorporating these nutrients could enhance his training sessions and adaptations to those training sessions.”

This information is not intended to replace a professional medical diagnosis or treatment.