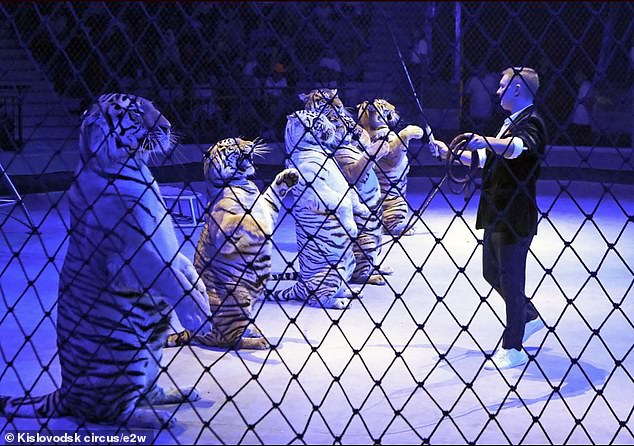 A circus show was halted when two female tigers engaged in a vicious fight in front of youngsters and their parents.

Extremely unsettling footage from the Kislovodsk State Circus in Russia shows trainers continuously hitting the tigers with poles and throwing objects at them to separate them.

During a performance, a nine-year-old white tigress named Gina attacked a tiger named Eru. Gina went on a rampage in the arena.

compromised performing animal Eru was severely injured but went back onto a ring stool before falling in front of hundreds of youngsters and their parents with blood streaming from gaping wounds.

Now, veterinarians are “fighting to save her life.”

The terrible incident prompted immediate calls for a ban on the use of live animals in Russian circuses.

The crowd watched in horror as the fierce fight raged for several minutes, and then witnessed the injured animal as trainers attempted to cage it.

Other tigers were present but did not participate in the battle.

A tiger fight that broke out during a Russian circus performance halted the show.

Trainers struck the tigers with poles and tossed objects at them to separate them.

Famous tiger trainer Yaroslav Zapashny, 32, from Moscow, who was touring with his group, apologized for the gruesome images for which the audience spent between £8 and £23 each ticket for a New Year’s performance.

According to circus specialists, unusually warm temperatures in the south of Russia caused Gina to “go into hunting mode prematurely.”

‘Today, during my performance with predators, a really severe struggle broke out between two tigresses,’ said Zapashny, the fifth generation of a famous circus dynasty.

Another tigress was assaulted by one of the tigresses.

To prevent horrific wounds, my tamers and I began separating them.

“Security personnel behind the [safety net] were involved….

According to experts, Gina’s early “hunting mode” was caused by the extremely warm weather.

They were torn apart…

“Unfortunately, one of the tigresses has quite bad wounds.

She was placed in a cage and transported.

Veterans are currently battling for her life.

I apologize to the audience for this unfortunate occurrence.

“This is the first case I’ve ever encountered.”

‘Fights occur, but such a vicious one was unprecedented’

Veterinarians are currently fighting for the tigress’s life after she was severely hurt.

The horrific big cat fight occurred a day after a lion attacked a well-known circus trainer in another part of Russia.

During a performance in front of youngsters and their parents, the beast “clawed and sank its teeth” into Alexey Makarenko, 42.

His 43-year-old wife, Olga Borisova, who is also a trainer, “saved his life” by chasing away the predator when it forced him to the floor of the circus ring in Sochi, a Black Sea resort.

After the tiger fight, there was an avalanche of internet petitions seeking a ban on live animals in circuses in Russia.

Milana wrote, “They are abusing animals.”

Another commenter stated, “Prohibit circuses.” This is a cruel and mocking act!’

Irina Novozhilova of the animal rights organization VITA has long advocated for the prohibition of live animal circuses, which remain popular in Russia.

She stated, “Circus conditions will not be humane for one simple reason.”

And animal-containing circuses should be prohibited.