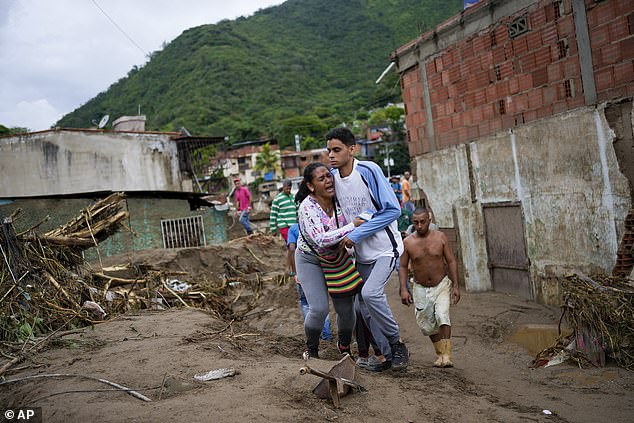 After torrential rains caused a river in central Venezuela to overflow, a massive landslide occurred, killing at least four people and leaving 50 more missing, according to reports.

Authorities in charge of search and rescue claim that the El Pato River, which is located 67 kilometers southwest of Caracas, inundated and carried away a number of homes, businesses, and a slaughterhouse.

At least four individuals perished as a result of being trapped in landslides, according to Juan Mario Gualano, head of the Red Cross in the state of Aragua.

In a Sunday tweet, Carlos Perez, the country’s deputy minister for civil protection, said that 1,000 rescuers were searching the region for casualties.

In the aftermath, distraught Las Tejerias locals were seen hugging one other and looking for lost relatives.

Following the floods, residents Jose Medina and Karen Salinas were both spotted scrambling out of their windows. Karen Salinas was also seen clutching her cat in her arms.

According to Sky News, Anderson Silva, a local resident, said that a retaining wall collapsed after days of intense rain.

Mr. Silva and his companion Isabel Pea hurriedly entered their house to get some of their possessions, but they were concerned that the remainder of the structure might crumble.

Because there was a first fall and then a second fall, I knew something terrible had happened. Then we had to go,” Ms. Pea stated.

The storm is now officially classified as a tropical depression by the Meteorology Institute, and it is likely that it will develop into a hurricane.

22 people have already died recently as a result of torrential rains brought on by the La Nia weather pattern.

La Nia, which translates to “the little girl,” is the name given to a meteorological phenomenon that develops in the Pacific Ocean.

Warm water is being blown at the ocean’s surface by strong winds from South America to Indonesia.

Near the South American coast, cold water from the deep rises to the surface as the warm water travels west.