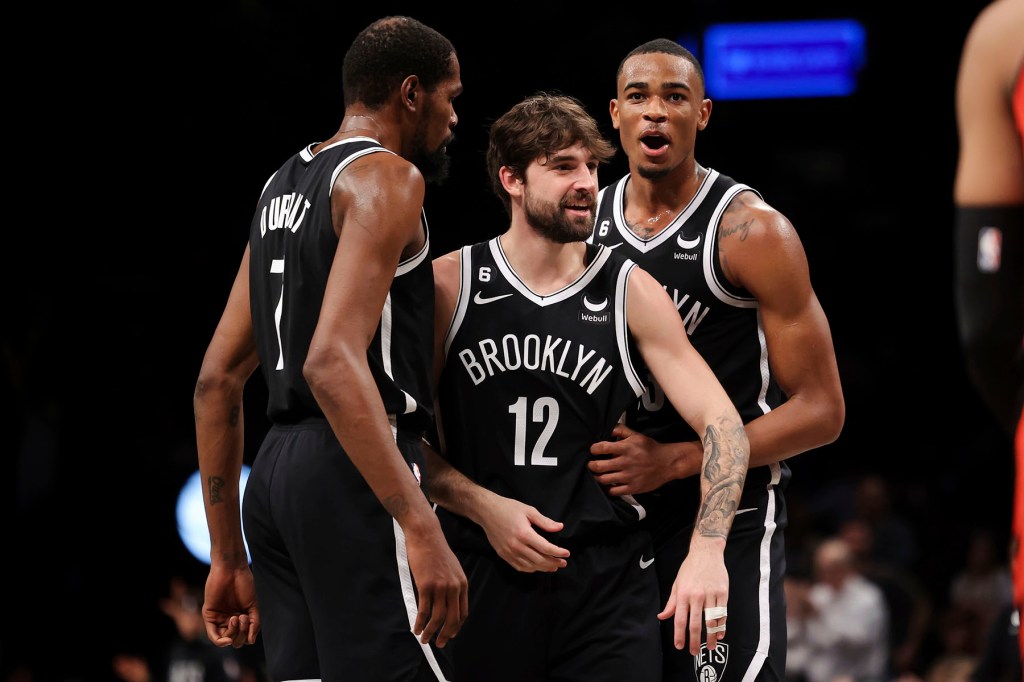 With anti-vaccination views, trade demands, suspensions, and star revolts, the Nets are difficult to surprise. Or otherwise.

However, here’s a stunner. Brooklyn, whose defense has been porous in recent seasons, has possibly the most effective defensive unit in the whole league.

“Really?” asked Nic Claxton, the true leader of the quintet, incredulously. “I was unaware of that. Solid!”

Indeed, they were. Interestingly so.

Claxton, along with superstars Kevin Durant and Kyrie Irving, and wings Royce O’Neale and Joe Harris, entered Friday’s game with a combined defensive rating of 94.1 after 116 minutes on the court. This was the best performance of any NBA lineup that played at least 75 minutes.

Harris stated, “I’m just trying to have a defensive mindset and do all the small things that win here.” As long as we’re locked down defensively, we’ll win a lot of games.

“I believe it’s the ability to have men guard positions one through five. When we have that lineup on the court, we can really put a lot of pressure on the ball handlers, as we have players who can switch and assist. Then, we are filling up all the holes; communication has been excellent. When you have five men that are as diverse as they are, it keeps everyone in tune. The synergy is effective. I believe that is one of the primary reasons why we’ve been so successful.”

How have they achieved such success? Especially on a Nets team whose defensive end of the court has frequently been the Achilles’ heel that has undermined their offensive dominance?

They’ve employed’red’ strategies to compensate for opponents seeking to penalize their small size. In common parlance, it is when a team fronts the low post and has a second defender double team from the weak side.

Observe carefully, and you’ll notice that the baseline is rife with traps designed to compensate for their size disadvantage. Gregg Popovich’s vintage San Antonio teams have been the greatest at’redding’ throughout the NBA’s history. It is no accident that Vaughn spent six years as a player, scout, and assistant coach under Popovich.

The Golden State Warriors then adopted and altered the strategy. With ultra-switchable Claxton and Ben Simmons, who we will discuss later, it makes likely that the Nets would adopt some of the Warriors’ strategies.

In search of a hero

Switching defenses have a tendency to entice opponents into mismatch hunts and isolation plays. And this is precisely what the Nets desire, given that most players are not at their best successful when playing hero ball.

“Honestly, it’s a trap, because we switch so often and teams want to play iso basketball, and nobody is suited to score one-on-one for an entire game,” Claxton said. “I believe it occasionally throws teams off their stride.

“When we’re all on the same page and nimble with our switches, it’s very difficult for other teams to iso, especially when they’re attempting to iso against me. I always like our chances,” Claxton said with a grin.

Nic Claxton has responded to the Nets’ attempts to lure opponents into isolation offense by “attempting to challenge every shot, regardless of who I’m guarding.”
AP

It is often forgotten that NBA coaches are not permitted to choose a starting lineup and remain with it throughout the game, but must instead shuffle five-man groups like a con artist playing three-card monte.

However, when the Nets have their defensive big five on the court, they have been difficult to defeat.

“I believe it is well-rounded,” Vaughn remarked. “Ky’s ability to stay in front of the basketball, which initiates the defense, is taken into account. Joe and Royce are two workers who don’t mind messing things up and covering up others’ transgressions. Then there is Nic’s ability to play both inside and outside, protecting the rim while also defending 30 feet from the basket.

“And I believe with that group, Kevin’s ability to make plays at the rim for us — as evidenced by his blocked shots and his ability to solve some of our switching and end up on a bigger player — is extremely energized. It’s been like a [fit], the way everything has come together; that’s a fairly solid defense.”

Claxton had always displayed the potential to be one of the league’s most versatile centers and best perimeter bigs; however, he has never demonstrated the ability to remain healthy and on the court. Once he eventually demonstrated it, this career breakthrough season became inevitable.

Durant’s wingspan is 7 feet, and he has gotten votes for the NBA’s All-Defense team. O’Neale is a 3-and-D wing, and while he’s not quite the disruptive player he was earlier in his career coming off the bench for Utah, he’s still solid enough at that end of the floor that former Jazz star Donovan Mitchell regretted trading him to Brooklyn in the offseason. And Irving has always had quick dialing skills.

Harris has been more unexpected. Simmons was chosen to the NBA All-Defensive first team twice and was runner-up for Defensive Player of the Year in his most recent healthy season. However, Brooklyn’s defensive rating skyrockets to 117.3 when he replaces Harris for 130 minutes, the Nets’ most-used lineup entering Friday’s game against the Raptors.

Harris stated that he believes his defensive effectiveness can be attributed to his degree of aggression. “We switch everything, so when rotating out to defend some of these great ball handlers, just attempt to get them to pick up the ball or get off of their rhythm. Just being active defensively.”

The tenacity of Joe Harris on defense, particularly in pick-and-roll coverages, has helped his teammates fill any voids behind him.
AP

But of the club’s two primary quintets, it is the one featuring Harris and his huge improvements in boxing out and pick-and-roll coverage that has elevated the club’s defense to a new level.

“Joe is learning to dictate, and he has that split-second window in which he can be the aggressor and then enable his teammates to fill in behind him. Therefore, he is learning the procedure that has made him a better pick-and-roll defender.”

And Brooklyn will have a more effective pick-and-roll defense. And this five-man lineup is currently the best in the league.