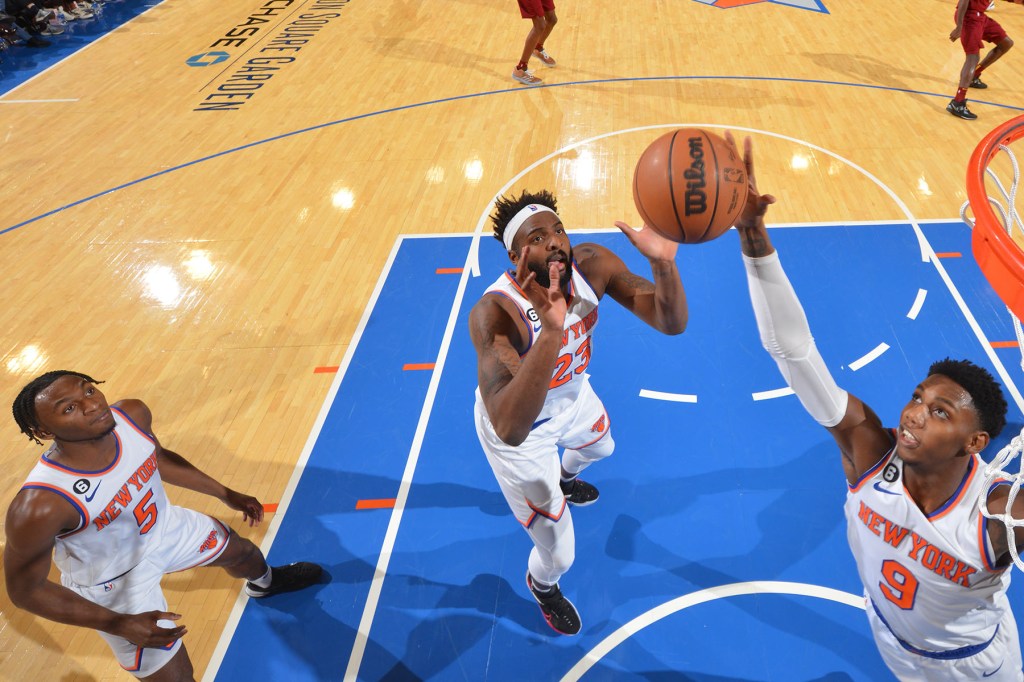 No, we’re not discussing the New York Knicks. This relates to the Eastern Conference, which was supposed to be a monster but has been a picture of mediocrity after the top teams for more than a quarter of the season.

Only two games separate the fourth-place squad from the 12th-place team in the loss column. The Celtics, Bucks, and Cavaliers are the only teams with winning percentages above.538. The Heat, 76ers, and Nets have been significant letdowns. The 12th-place Bulls (10-14) are rumored to be eager to trade veteran difference-makers DeMar DeRozan and Nikola Vucevic. In an effort to better their situation by slipping down the standings, more teams may wind up dumping key players in the wake of what some observers feel could be a historically outstanding draft.

In recent weeks, despite not being dominant, the Knicks have been competent enough to maintain a playoff spot in the Eastern Conference.

This creates a perfect opportunity for the Knicks, who, despite their poor 12-13 record, are one hot streak away from being in a solid position for the playoffs. After their victory over the Hawks on Wednesday night, they are only 1.5 games behind the Nets (14-12) for fourth place in the conference.

Due to the strength of the Eastern Conference, it was believed that reaching the play-in round was a realistic objective for the Knicks. That did not account for the fact that injuries and poor performance pushed back so many clubs. Now, I anticipate that many teams will eventually return to form, with the 76ers, Heat, and Nets winning more games than they lose, and the Pacers (13-12) going in the opposite direction. Remember that the Celtics were a.500 team through the first 50 games of last season before surging to the NBA Finals.

However, it should be remembered that the Knicks’ schedule thus far has been challenging. They have already completed five consecutive matches. According to Tankathon, their remaining schedule is the seventh easiest in the NBA.

And during the previous few weeks, the Knicks have played far better, beginning with the home defeat to the Thunder in which they surrendered 145 points in a dreadful performance.

True, their 6-6 record and 1.5 net rating since then are hardly cause for celebration. However, during this 12-game period, they faced nine opponents with winning records. Three of the losses were by six points or less, to the Bucks, Grizzlies, and Trail Blazers. On the road, they were 4-2. And they welcomed back a healthy Quentin Grimes, their finest perimeter defender, who has reclaimed his starting position.

The return of Quentin Grimes has provided the Knicks with a perimeter defender capable of containing the league’s most lethal perimeter players.

It is not unduly optimistic to assert that this club has recently improved and that a win-loss record improvement is likely in December. The schedule is relatively light till January 1st. Six of their next twelve games are against opponents with losing records. And two of the teams they’ll face that have more wins than losses — the Kings and Pacers — have gotten off to surprisingly strong starts that still feel a bit fluky.

The Knicks have access to the building. It is certainly more accessible than it appeared in October. Now they must forcibly push the door open.

Not Brunson or nothing

One player stood out in the box score of the Knicks’ lopsided victory over the Hawks. No, Julius Randle (34 points and 17 rebounds) and Quentin Grimes (season-high 23 points on 11 shots) were not the Knicks’ two finest players on this unusually calm night. It was not Miles McBride’s plus-19 rating and six assists in 27 minutes.

It was Brunson, Jalen.

The Knicks’ comfortable victory over the Hawks despite Jalen Brunson’s off night is an encouraging sign.

The rookie had a dismal night, missing 12 of 14 field goal attempts, committing four turnovers, scoring eight points, and dishing out six assists. The fact that the Knicks won despite Brunson’s absence for the first time this season speaks something about how dependent they have been on their rookie point guard.

It also says a lot about the Knicks’ trajectory that they can now overcome Brunson’s subpar performance and still defeat a quality opponent.

At least for one night, the Knicks were able to succeed without Brunson’s excellent performance.

If you had been paying careful attention to Derrick Rose’s role previous to his non-appearance in Sunday’s victory over the Cavaliers, it shouldn’t come as a surprise that he has been taken out of the rotation.

Rose was averaging just 13.6 minutes per game and a 40% field goal percentage. In a rough November, Rose made only 30 percent of his 3-point attempts and averaged just 5.7 points per game. He was not making an impact with the time allotted to him. Immanuel Quickley is the reserve guard who has seen the most action.

At 34 years old, it is reasonable to question how much Rose has left. It’s also reasonable to wonder if he’s still working on getting his legs underneath him after playing in only 26 games due to numerous ankle operations last season.

Miles McBride, a second-year guard, has had a great impact on the Knicks since joining the rotation.
Robert Sabo

The other part of the dilemma is McBride, a 2021 second-round draft pick for the Knicks who has performed admirably in the previous two games. He entered with a reputation as a fierce defender, but as a rookie, he didn’t receive much of an opportunity to show himself.

Thibodeau extols McBride’s preparedness and work ethic, praising the former West Virginia standout. He discusses McBride similarly to how he discusses Grimes, and Thibodeau has not concealed his admiration for Grimes.

McBride’s outstanding defense, combined with his eight assists and two turnovers in the previous two games, will not hinder his efforts to maintain his rotation status. Neither will the Knicks outscoring their opponents by 27 points in McBride’s combined 43 minutes of action during those games.