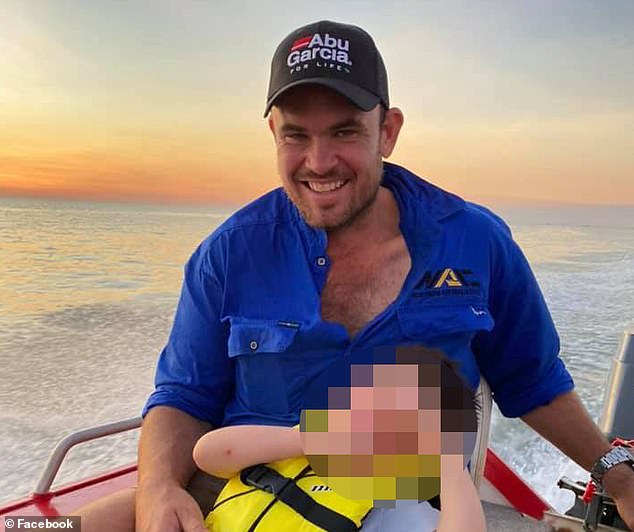 Chris Wilson, 34, was killed on February 28 when the Robinson R44 helicopter he was hanging 30 metres below collided with trees and the ground in West Arnhem Land.

The father of two’s body was found 40 metres from the main wreckage at the King River crash site, a preliminary Air Transport Safety Bureau report released on Tuesday says.

The sling line attachment rings were not connected to the helicopter cargo hook.

Seriously injured pilot, Sebastian Robinson, was airlifted to Maningrida, before being transferred to hospital in Darwin.

Mr Wilson was attached to the line using a harness so he could harvest eggs from difficult to access crocodile nests in swampy areas while the helicopter hovered above.

The crashed helicopter and its crew was one of three collecting eggs on the day. It was found by one of the other crews after it failed to respond to radio calls.

Outback Wrangler host, presenter Matt Wright has previously said ‘his family and team (were) absolutely devastated by the tragic accident’.

‘(They) are heartbroken by the loss of their best friend and highly respected colleague Chris ‘Willow’ Wilson,’ a statement issued by The Fordham Company a day after the crash said.

‘Preliminary analysis of the site by investigators indicated the accident sequence had occurred while the helicopter was travelling in a north-west direction,’ Stuart Macleod, the bureau’s director of transport safety, said.

The helicopter’s main rotor blade had struck and cut through a tree trunk multiple times before the aircraft hit the ground.

‘Initial assessment indicated the engine had stopped prior to the helicopter colliding with the ground.’

An examination of the engine found no defects likely to cause the engine to stop and there was no visible damage to the tail rotor blades and drive system.

The helicopter’s two fuel bladder tanks were also intact despite breaches of the surrounding metal tanks.

A handheld emergency radio beacon and the helicopter’s emergency locator transmitter, which was not mounted to the airframe or armed in case of emergency, were found in the helicopter. Neither was activated to alert rescue personnel of the accident.

The ATSB said the investigation was in the early evidence collection phase and no detailed analysis or findings had been made.

Outback Wrangler is a hit adventure television series filmed in remote Top End locations that airs in more than 90 countries.

Mr Wilson was one of three cast members along with Mr Wright and Jono Brown. The show chronicles their work capturing and transporting dangerous animals posing a threat to people, including crocodiles and wild buffalo.