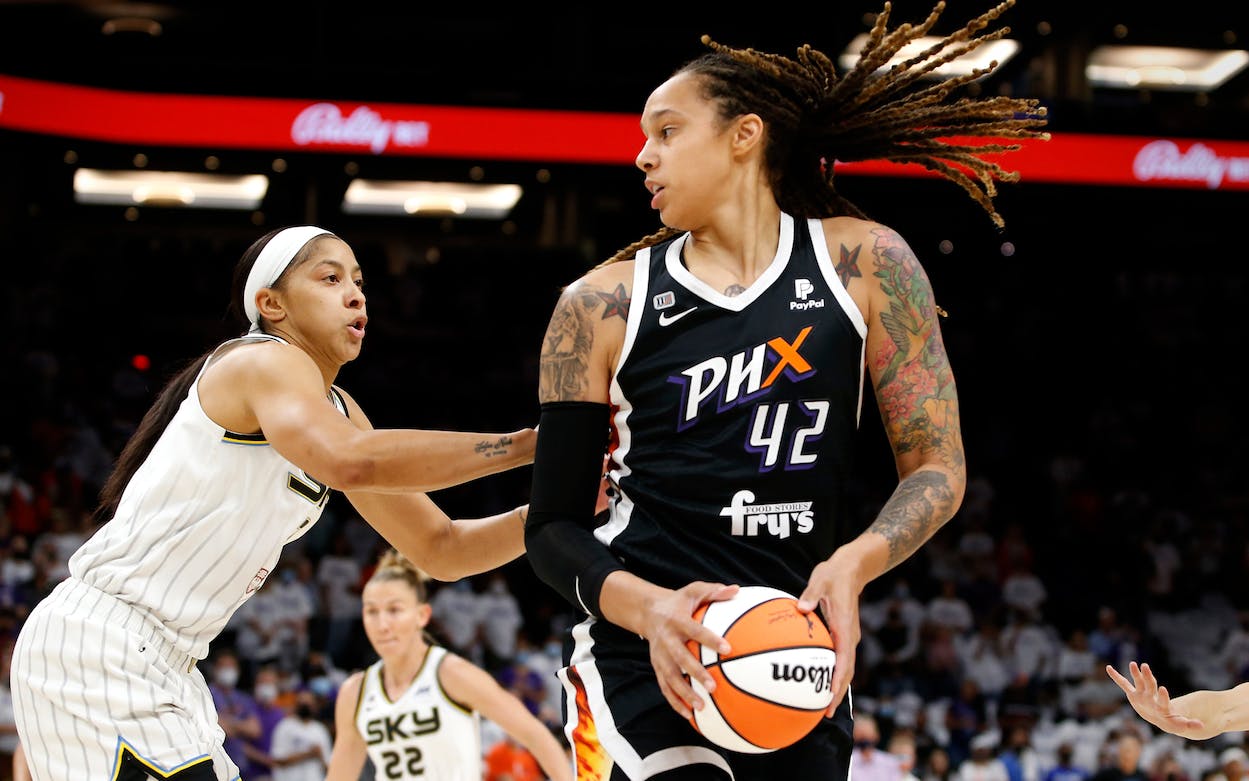 Brittney Griner is currently well-known around the world for being a political prisoner trapped in the center of a geopolitical confrontation.

But prior to her February 2022 arrest in Russia, Griner was primarily recognized for her unparalleled hardwood skills.

Raymond, her father, served in the Marines during the Vietnam War before becoming a Harris County police officer.

Sandra remained at home to care for Brittney and her five-year-old older sister, Pier.

Brittney wrote in her autobiography that Griner has two half-siblings, DeCarlo (17 years older) and SheKera (10 years older), with whom she grew up so closely that they “consider each other full blood family.”

Raymond was always very protective of his family, and Brittney recalls that dad had “so many terrible rules” to keep her safe and “on the correct path.”

She was rarely permitted to spend time with friends outside of school, and as a result of her height and tomboyish look, Griner was a frequent target of bullying throughout middle school, according to her writing.

Griner recalled, in an attempt to be “average,” “wishing away so much of what would eventually make me successful in basketball: my size, power, and persistence.”

In a few years, though, she would uncover her unique talent by chance.

During a match between the Phoenix Mercury and Seattle Storm in 2018, Stewart (left) drives on Griner.

She encouraged Griner to give basketball a try, and despite her “terrible skills” at the time, she was good enough to make the junior varsity squad.

In the same year, Griner made personal strides; she embraced her sexuality and began coming out as gay to some of her peers and her mother.

After defeating the Dallas Wings at Feld Entertainment Center on August 10, 2020 in Palmetto, Florida, Brittney Griner #42 of the Phoenix Mercury walks hand-in-hand with wife Cherelle Watson.

Griner “only had eyes for Baylor” from the very beginning, despite the acclaim that surrounded her and the fact that she could have attended any number of top-tier universities.

Griner liked the concept of remaining close to home, attending a relatively small university, and playing for Hall of Fame head coach Kim Mulkey, whose “intense, tough-talking authority” reminded her of her father.

Mulkey (right) and Griner at a press conference in 2013.

Griner averaged 33 points, 15.5 rebounds, and 11.7 blocks per game during her senior year of high school despite turmoil in her personal life.

When she arrived on the Baylor campus in Waco, Texas, less than a year later, she was prepared to maintain this momentum.

But Year 1 in Waco was not without its challenges, such as when Griner forgot her footwear and ran the team’s timed mile in Vans.

Or, more severely, when she lost her temper during an already violent game and broke Jordan Barncastle’s nose by punching her in the face.

She said that she developed as a result of mandatory community work, sending an apologetic letter to Barncastle, and — probably most significantly — attending counseling and learning to regulate her emotions.

Griner once again managed to excel on the court despite adversity off of it; her sophomore year stats of 23 points, 7.8 rebounds, and 4.6 blocks per game earned her First Team All-America honors.

Griner increased her already impressive statistics during her junior year. She led Baylor to a perfect season and a national championship by averaging 23.2 points, 9.5 rebounds, and 5.2 blocks per contest.

Griner’s 748 career blocks are still the most by a single player, regardless of gender, in NCAA history, over a decade after she graduated.

Griner was the first overall selection in the 2013 WNBA Draft.

Griner had early success in the WNBA, earning a spot on the All-Star team as a rookie and leading the league in blocks per game with 3.0.

Her stats improved the following season, earning her another All-Star nod, while the Mercury excelled under new head coach Sandy Brondello.

They broke the record for most regular-season victories in WNBA history, then swept the Chicago Sky to bring Phoenix their third WNBA championship trophy.

Off the court, Griner became engaged to fellow WNBA star Glory Johnson in August 2014, and the couple wed in May 2015, despite a highly publicized domestic incident that occurred only two weeks prior.

On April 22, 2015, after receiving a complaint of a dispute between Griner and Johnson, police arrested both men at their house in a Phoenix suburb. Griner and Johnson were each suspended for seven games by the WNBA on May 15 after Griner pled guilty to disorderly conduct charges and consented to 26 weeks of domestic abuse rehabilitation. In the end, Johnson pled not guilty, and the accusations against her were dropped.

AP and The New York Times are the sources.

In October 2015, Johnson gave birth to twins conceived via in vitro fertilization. However, the couple divorced eight months later.

Griner is engaged to Cherelle Watson in August 2018. The pair wed after nine months.

Griner has led the league in scoring twice and blocked eight times during her WNBA career. She has participated in eight All-Star games, received two Defensive Player of the Year accolades, and been selected to six All-WNBA teams.

Indicated by her participation on the WNBA 25th Anniversary Team, she was selected one of the WNBA’s 25 greatest players of all time while still in the midst of her career.

Brittney Griner and Candace Parker compete for the ball.

Her accomplishments stretched beyond the WNBA.

She helped Team USA win gold medals in the 2016 Olympics in Rio and the 2020 Olympics in Tokyo.

In addition, she has won two FIBA World Cups with Team USA.

Griner would frequently travel abroad during the WNBA offseason to bolster her relatively low US salary from the league.

She played with the Zhejiang Golden Bulls in China after her WNBA rookie season.

But beginning the next year, she played for European powerhouse UMMC Ekaterinburg in Russia.

Numerous WNBA superstars were employed by the oligarch-owned championship factory, and Griner reportedly demanded a seven-figure wage to play there each winter.

It was no surprise that Griner spent eight consecutive offseasons in Europe, as she and her American teammates were undoubtedly treated like kings throughout their time abroad.

Griner and her teammates from UMMC Ekaterinburg celebrate winning the EuroLeague.

In 2022, however, relations between Russia and the United States deteriorated as President Vladimir Putin threatened to attack Ukraine.

By the time Griner boarded a plane to Russia to reunite with Ekat for the second half of the 2021-2022 season, the WNBA had began advising players to abandon their plans to play in Russia.

However, it was too late. Griner arrived at Sheremetyevo Airport in Moscow on February 17, and upon passing through security, it was discovered that she had concealed vapes with 0.702 grams of cannabis oil in her luggage.

She claims that, when packing hastily prior to her travel, she forgot to empty her bag and packed her prescribed medical marijuana accidently.

Putin launched Russia’s invasion of Ukraine exactly one week after Griner was seized and transferred to Russian custody.

It is unknown to which prison she will be transported, but the most infamous in the system contain forced work, regular torture, and widespread sickness.