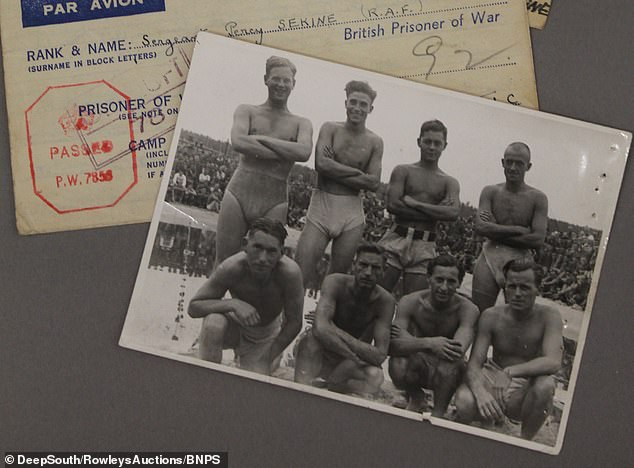 The fascinating wartime archive of an RAF airman with Japanese heritage who escaped three times from PoW camps has been put up for sale by his family.

Warrant Officer Percy Sekine’s mother was British and his Japanese father worked for The Mitsui Bank in London.

He was a black belt in judo when he volunteered as a 19-year-old for the RAF at the outbreak of the Second World War.

He bailed out of a Hampden bomber at 3,000ft over the Netherlands in 1942 after it was hit by anti-aircraft fire.

But his two pilots could not escape in time and died when the aircraft crashed.

Warrant Officer Sekine was captured five hours later and taken to a PoW camp, but then escaped by climbing over the wire fence.

He was recaptured and put in Stalag 383 in Bavaria, where he set up a judo club, created a dojo and put on tournaments.

After the war, he went on to captain the British judo team during the 1950s and 1960s and was once pictured showing off his moves in the Daily Mail.

Now, his family is selling his archive with auctioneers Rowley’s, of Ely, Cambridgeshire. The archive is expected to fetch up to £1,000.

It includes previously unseen photos of life in Stalag 383, including his judo group.

Other images are of fellow airmen and him playing golf with former fighter ace and fellow ex-PoW Group Captain Douglas Bader, who he befriended in later life.

As well as his initial escape, Warrant Officer Sekine made two other bids for freedom – once going under a wire fence and once through it.

While at large he joined the queue at a mobile German soup kitchen whilst still wearing his RAF battledress and enjoyed a meal before continuing his escape.

But he was apprehended for a second time when he walked past a squad of German soldiers in the town of Bad Tolz in Bavaria.

He gained the captaincy of the British judo team despite the fact that he weighed only 9.5stone and was just 5ft 6in tall.

Warrant Officer Sekine’s wife Hana was the daughter of Gunji Koizumi, who first brought the martial art of judo to Britain in 1918.

Included in the soldier’s archive is a picture of his father-in-law.