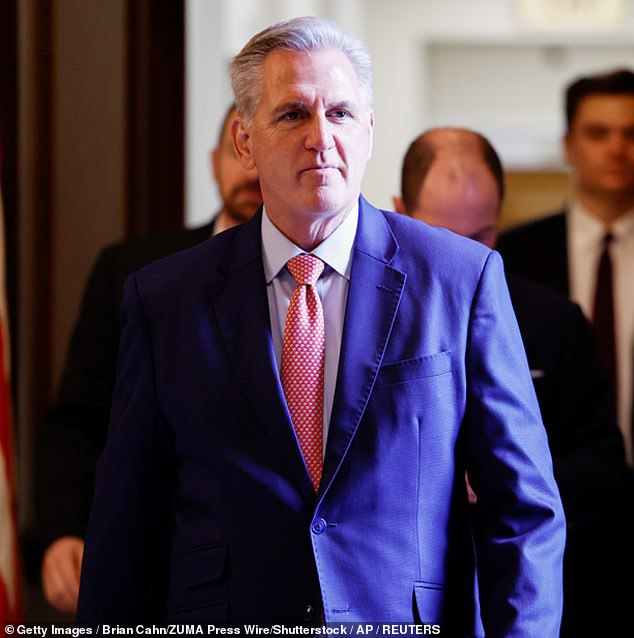 On Tuesday morning, Republicans were convening a conference meeting behind closed doors, where it was anticipated that beleaguered Leader Kevin McCarthy would make his final pitch for the Speaker’s gavel.

The 118th Congress is scheduled to convene on Tuesday at noon, but as of this morning, the majority party in the House of Representatives is still divided on who will serve as speaker for the next two years.

The Republicans’ newfound dominance has gotten off to a rocky start due to their public conflicts over McCarthy’s ambition for the speakership.

McCarthy can afford to lose only four votes and still be elected Speaker with only 222 Republicans in the new Congress.

We have worked diligently for months to alter the current quo. McCarthy has marginalized or fought us at nearly every point, and any perceived progress has frequently been ambiguous or featured loopholes that have heightened suspicions about the authenticity of pledges made,’ Perry wrote.

Kevin McCarthy had an opportunity to become House Speaker. He refused it.

This is a matter of showmanship and notoriety. It has nothing to do with the agenda of conservatives,’ added Crenshaw.

McCarthy is anticipated to need 218 votes, but the Republicans hold 222 seats in the new Congress, so he can only afford to lose four members.

There are multiple rounds of voting until a majority decision is reached. Conservatives are anticipated to derail McCarthy in the first round by nominating Republican Rep. Andy Biggs, who is unlikely to win a majority of votes but would take away enough from McCarthy to defeat him.

His detractors have not yet announced who they intend to put in his place, but various sources indicate they are considering McCarthy’s No. 2, recently appointed House Majority Leader Steve Scalise.

There are currently 14 members of his caucus who have strongly indicated they will vote against him.

McCarthy, his loyalists, and some of his detractors, notably Representatives Matt Gaetz and Perry, gathered on Monday evening to discuss the chaos.

Reps. Lauren Boebert and Matt Gaetz could be a dilemma for McCarthy on Tuesday, with Gaetz being one of McCarthy’s most vociferous detractors.

Republicans were observed entering the House Speaker’s chamber at 5:00 p.m. ET. McCarthy’s staff apparently moved furnishings into that office earlier in the day as a show of confidence, despite the fact that such an early transfer is supposedly usual policy.

According to a video captured by Haley Talbot of NBC News, Gaetz told reporters that the discussion was “short and fruitful” but said he would continue to oppose McCarthy.

He is one of five House Republicans who have promised to always vote against the GOP Leader.

According to CBS News, Emmer informed reporters, “He will be the keynote speaker.”

McCarthy and his friends have spent weeks attempting to convince his critics, primarily right-leaning conservatives, to back the California Republican. But they want concessions that party moderates and McCarthy himself, until lately, have been hesitant to grant.

McCarthy offered several important concessions in a Sunday letter to colleagues, including a proposal to relinquish the chair with a five-vote threshold in exchange for conference-wide support.

According to the present planned rules, any five House Republicans could request a vote for a new Speaker. Moderates worried that it would feed instability inside the conference, equating it to dangling a Damocles’ sword over the head of the party.

According to reports, McCarthy’s current No. 2, upcoming House Majority Leader Steve Scalise (left), could be the conservatives’ choice to replace McCarthy as Speaker.

Rep. Don Bacon, a moderate Republican, stated Monday evening that such a mutiny would not be easily tolerated, promising to further inflame the situation.

Bacon reportedly told reporters that he is considering selecting an exiting member of the current Congress if the five “Never Kevin” Republicans nominate Scalise over McCarthy.

Bacon published an opinion piece in the Daily Caller on Monday, praising McCarthy’s leadership and reiterating his willingness to collaborate with Democrats should the anti-McCarthy uprising succeed.

Bacon added, “much has been made of my statement that I will cooperate with moderate Democrats to elect a more moderate speaker.”

“However, my real remarks were that I’m happy to work across the aisle to find an amenable Republican if the five fail to unite on what the vast majority of the conference desires.”

McCarthy’s allies appear to be hunting for a plan B, as moderate GOP Rep. Don Bacon (seen in 2021) has suggested many times he would be willing to negotiate with Democrats on a moderate Republican Speaker candidate should the California Republican’s bid be thwarted.

McCarthy has had a vast array of surrogates attempting to persuade the holdouts over the past few weeks, ranging from conventional conservatives like Gingrich to Donald Trump and Rep. Marjorie Taylor Greene – allies of many of McCarthy’s most vocal opponents.

However, their method of pressuring opponents to conform and threatening a worse option did not appear to have any effect.

After allegedly also meeting with McCarthy on Monday night, Greene commented on Twitter: ‘Incredible that people purporting to be America First are negotiating for “Me First” stances with regard to the Speaker’s gavel.

The constituency deserves the truth. They would be as repulsed as I am,’ the Georgia legislator from the far right stated.

Rep. Andy Biggs, one of the five original ‘Never Kevin’ Republicans, tweeted after 8 p.m. ET on Monday: ‘Even after the McCarthy Machine’s attempts to whip votes and slander my name for weeks, McCarthy remains well short of the 218 barrier.

Biggs stated, “Our party requires new leadership, and I will continue to oppose McCarthy for House Speaker.”