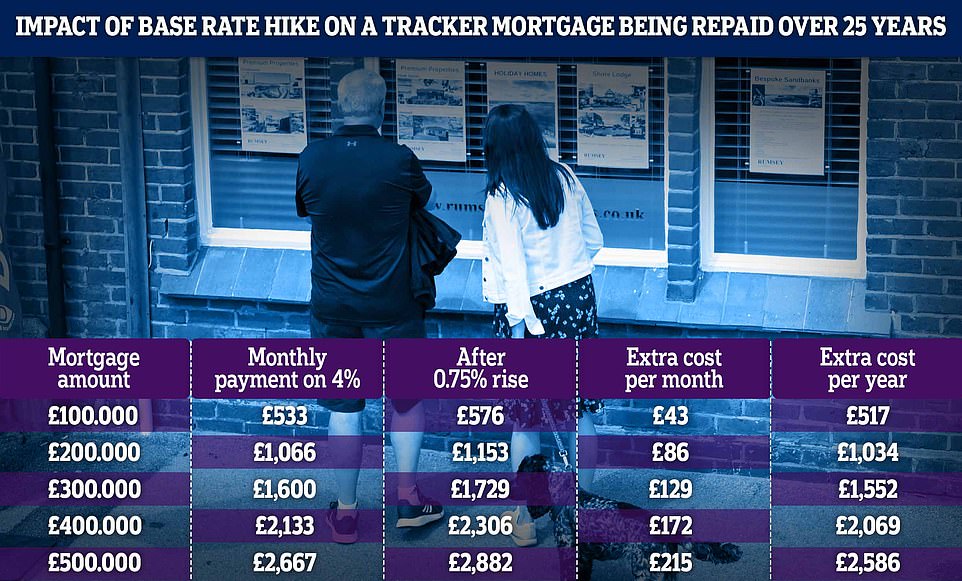 In an effort to control inflation, the Bank of England recently raised the base rate from 2.25 percent to 3 percent, the highest level in more than a decade.

Analysts also predicted that due of the way inflation would erode average salaries, the UK will see the sharpest pressure on real incomes since the Second World War.

Mortgage customers are feeling the effects of the rate increases as the cost of variable packages and new fixed rate deals are rising quickly. It implies that some people’s monthly payments may increase by several hundred pounds.

High street lenders are now providing rates for a five-year fix of around 5.49 percent, while the lowest 10-year fix is currently at 5.59 percent.

Base rate, often known as Bank Rate, is now anticipated to peak between 4.5 and 4.75 percent rather than the 5.25 percent or more that was previously anticipated.

Governor Andrew Bailey stated Wednesday that mortgage lenders should lower their present eye-watering prices since the market anticipates a reduction in mortgage rates in the future.

According to where we are right now, we believe the Bank rate will have to increase less than what the financial markets are now pricing in. This is significant because, for example, it implies that rates on new fixed-term mortgages shouldn’t need to increase as they have.

After the Monetary Policy Committee (MPC(7-2)’s decision, which marked the eighth consecutive increase in interest rates, they are currently at their highest level since the 2008 Global Financial Crisis.

Borrowers with a conventional variable mortgage of £200,000 may notice an increase in payments of more than £1,000 per year.

Although mortgage lenders will have already factored this in over the previous month, the base rate has raised to 3%, as predicted, said Ashley Thomas, director of London-based mortgage broker Magni Finance.

As ridiculous as it may seem, you could discover that additional mortgage rates will drop since the base rate hasn’t risen as much as some had predicted.

It is evident that Rishi Sunak’s selection as PM has had a huge and favorable effect on the mortgage market and, therefore, homeowners.

Although this is the raise we were all anticipating, it will still come as a shock to many homeowners, said Elliott Benson, mortgage broker at Sett Mortgages.

The BoE rise is the biggest daily adjustment since Black Wednesday in 1992, when Britain’s decision to leave the Exchange Rate Mechanism threw markets into a tailspin. The BoE statement came after a similar one from the US Federal Reserve hours earlier.

The last time there was a continuous increase of this magnitude was in 1989, but the panicky rate increase on Black Wednesday only lasted for one day.

This suggests that the price of fixed-rate mortgages, which has risen to about 6%, may begin to decline, benefiting individuals who are considering remortgaging.

However, Mr. Bailey cautioned that the UK and families had a “difficult path ahead.”

Eight rate increases since last December, he conceded, are “huge adjustments and they have a substantial effect on people’s life.”

“If we don’t act strongly now, it’ll be worse later,” he said.

What you saw immediately after the Trussonomics mini-Budget was a significant increase in anticipated rate increases from the Bank of England, which caused many mortgage offers to be withdrawn, she told MailOnline.

People on tracker rates will continue to pay more due to ongoing rate increases. However, there may be better deals on the horizon for mortgage holders who may need to renew their loans or who want to get a mortgage for the first time.

By the end of 2024, 5.1 million families would see a significant rise in their mortgage expenses, with an average yearly increase in the neighborhood of £3,900 compared to Autumn 2022, according to James Smith, Research Director of the Resolution Foundation. Real earnings for households will generally decrease by around £800 in the next year.

Furthermore, the Bank’s most recent projections revealed a bleak picture for the UK economy, with GDP projected to shrink for two years.

The economy would conclude this parliamentary term smaller than it began since this would be the longest recession in history. Additionally, a 1 million increase in unemployment is anticipated, bringing it to levels not seen since the financial crisis.

The BoE issued a recessionary warning in August and has since stressed that the slump would be more severe and prolonged.

Although the US Federal Reserve likewise announced a 0.75 percentage point increase last night, officials yesterday increased the base rate by the most in 30 years.

However, expectations have decreased and the Bank has indicated that inflation is expected to swiftly decline starting in 2019.

Since the GDP is now expected to decline throughout 2019 and into the second half of 2024, the BoE is anxious to prevent escalating the impending recession by excessive rate hikes.

After banking tsars raised the base rate and issued a warning that the economy will likely contract for two years, sterling yesterday fell 2.1% to 1.1158 versus the US dollar.