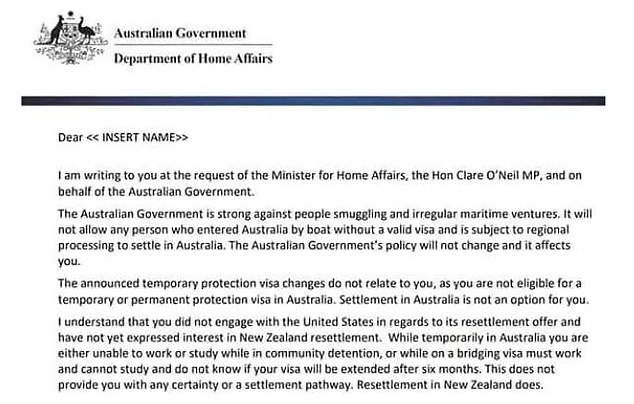 Refugees and asylum seekers have received deceptive letters instructing them to leave Australia due to a significant administrative error.

A senior officer at the Department of Home Affairs purportedly sent the letters on behalf of minister Clare O’Neil.

The letters stated, “Settlement in Australia is not an option for you.”

No one who entered Australia by boat without a valid visa and who is subject to regional processing will be permitted to reside in Australia.

ABC was the first to report on the letters. The Minister of the Interior has asserted that the letters were not sent with her authorization, a claim that the department disputes.

Karen Andrews, the home affairs spokesperson for the opposition, stated that it was “extremely rare” for the department to publicly contradict its minister.

‘They would normally carry out the tasks assigned to them by the minister, so if the minister claims she had no awareness of this letter, it raises the question of whether she understands the work of her department.

” she stated to ABC.

The letters stated, “Settlement in Australia is not an option for you” (pictured, asylum seekers)

‘Does she comprehend the work they are performing, and what instructions can she give to her department?

The former minister should apologize for the shambles the Morrison administration left the visa system in after every interview, he told the ABC.

It is crucial for ministers to serve as cultural leaders, as the minister stated this morning.

Senator Ayres denied that a request for the government to modify the tone of the letters would result in a modification of its border policy.

He stated, “The minister has expressed her displeasure with the tone of that letter.”

The Liberals’ discussion of this subject for the remainder of the day will be the greatest game of insider baseball ever played.

The Asylum Seeker Resource Centre’s Hannah Dickinson stated that it was unclear why the department sent the email.

Ms. Dickinson stated that the letters brought distress to those who were already in limbo.

She stated, “We hope it was an error on the part of the agency and that communication of this nature would never occur again, as there are grave ramifications for the community.”

Some of the letters were addressed to specific persons, while others began, “Dear INSERT NAME HERE>.”

Following their detention in regional processing centres in the Pacific, the asylum seekers were brought to Australia for medical treatment.

Ms. Dickinson stated that the department had violated the right of individuals to be communicated with in a straightforward and considerate manner.

ABC was the first to report on the letters. The department disputes the Home Affairs Minister’s claim that the letters were not sent with her authorization.