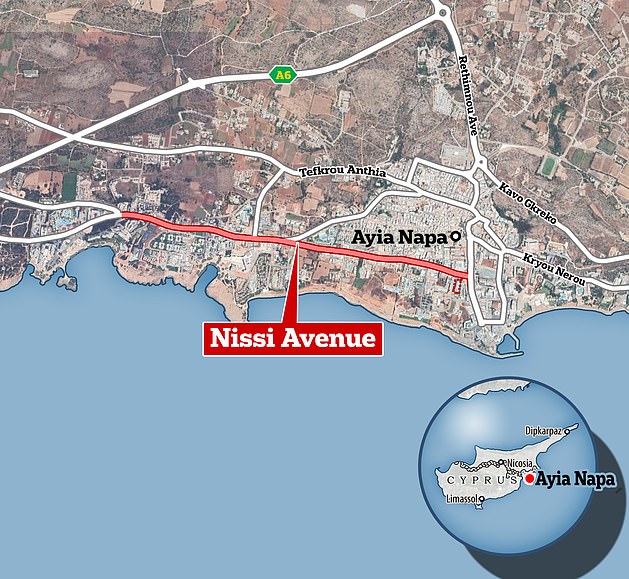 This is the holidaymaker who was run over and killed on a zebra crossing in Ayia Napa by a beach buggy allegedly driven by a British man who was high on drugs.

Camilla Christina Pamdahl, 46, had left her five-year-old daughter at the kids club of the hotel where she was staying so she could visit a local supermarket.

But as she crossed the road at the resort of Ayia Napa she was hit by the black and red buggy, which was being driven by a man police believe was Manraj Singh Sidhu, 25, from Bedfordshire.

Camilla, who was from Gothenburg, Sweden, had arrived in Cyprus on April 29, with her daughter for a week’s holiday and was staying at the Sunwing Family resort, which is Swedish owned.

Paramedics raced to the scene and she was transferred to nearby Famagusta Hospital where she was declared dead.

Manager Louis Misseris told MailOnline: ‘It is very sad. I saw the accident as I arrived at the hotel and saw the road was blocked by the police.

‘I decided to go and check it wasn’t one of our guests because the zebra crossing is right outside the hotel and at first the police were not able to say.

‘Then after about an hour or so one of the staff from the kids club told us that a little girl hadn’t been picked up and it was then we realised the victim was one of our guests.

‘The police gave us the name and we checked and she was staying with us – she had arrived the Friday before and should have left a week later.

‘I looked outside and saw the buggy and a car on the zebra crossing and so I ran to see if I could help, some of the people in the restaurant having dinner came as well.

‘I saw a woman on the floor and there were two guys in the buggy, one looked hurt and the driver shook him as if to wake him up and then they both jumped out and ran away.

‘One of them ran right past me and then the next thing a doctor from the hotel where the lady was staying came to help.

‘I took one of the table cloths from the restaurant to make her more comfortable and the doctor was holding her hand.

‘The ambulance was here very quickly and they took her to hospital but I heard she didn’t make it. It’s so terrible – she had been in here for dinner with her daughter a few days before.’

Sidhu appeared in court yesterday in nearby Paralimni accused of causing death by dangerous driving and being under the influence of drugs.

Sidhu, of Shefford, Bedfordshire, was remanded in custody until next week, as his parents sat at the back of the court after having flown in to support him.