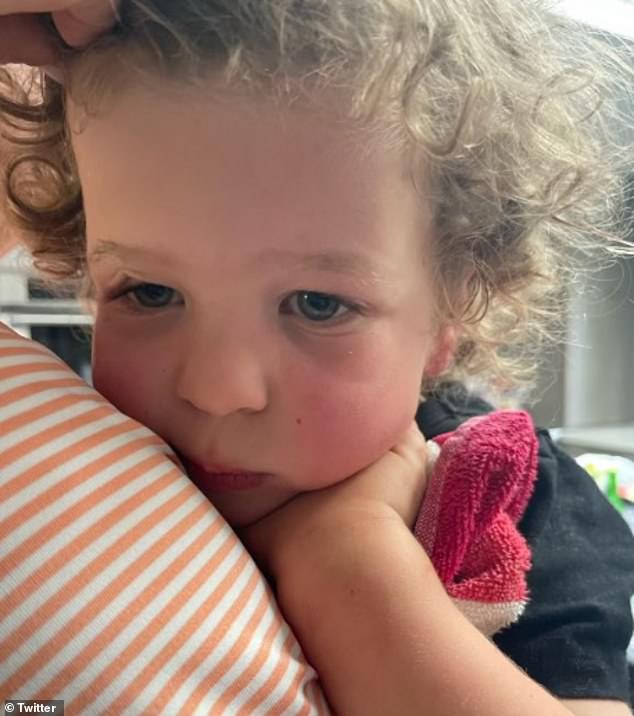 The young child who was found bleeding and rescued from beneath his father after the Highland Park parade shooting on Monday is now an orphan because both of his parents perished in the heinous crime.

Among the seven people slain during the Fourth of July party were Kevin McCarthy, 37, and Irina McCarthy, 35.

Fortunately, Aiden McCarthy, their two-year-old son, was unharmed despite being separated from his parents throughout the commotion. His grandparents are now responsible for looking after him.

To assist Aiden’s family with “raising, caring for, and supporting” him, a GoFundMe campaign was created. Over $79,000 has already been raised through the account.

A 21-year-old shooter used an AR-15-style weapon to open fire on the Independence Day celebration, leaving at least seven people dead and many more injured.

‘We took him to safety under tragic circumstances, came together to locate his grandparents, and prayed for the safety of his family,’ she wrote.

‘The North Shore community rallied to help a boy who we knew nothing about. Sadly, I need to share his name…Aiden McCarthy and he needs more of our help.’

‘Aiden is left in the unthinkable position; to grow up without his parents,’ she added.

Colon claimed Aiden has been placed in the care of his grandparents, Misha and Nina Levberg, but still faces a long journey to ‘heal, find stability, and ultimately navigate life as an orphan.’

‘He is surrounded by a community of friends and extended family that will embrace him with love, and any means available to ensure he has everything he needs as he grows,’ she explained.

‘On behalf of his family, and with their permission, I am establishing this fundraiser to support him and the caregivers who will be tasked with raising, caring for, and supporting Aiden as he and his support system embark on this unexpected journey.’

Aiden was found by Lauren Silva, 38, of Deerfield, and her boyfriend after they heard gunshots as they were heading to breakfast at Walker Bros restaurant.

Silva told the Daily Beast they emerged from a parking garage a few blocks away from the shooting just as the violence began to unfold.

When Silva, her boyfriend, and his son started to run toward the injured people, her boyfriend abruptly shoved the young boy into her arms.

‘My boyfriend handed me this little boy and said he was underneath this father who was shot in the leg,’ she told the Beast. ‘They were trying to stop the bleeding so I brought the boy downstairs into the garage.’

Once inside the garage, she was able to wash the blood from him and clean up his cuts. She claimed he was only wearing one shoe and had blood all over his sock.

He continued asking if his parents would be returning soon, she claimed.

After waiting for 20 minutes, Silva emerged from the parking garage to check on the father. She gave Aiden to a family she was hiding out in the garage with, who eventually gave him to police after taking him to the hospital. His grandparents were eventually reunited with him.

Silva, a mother of two, said she’s holding on to the memory of the ‘kid’s face and his touch and the sound of his voice.’

‘I feel like I want to hold on to, like, a little bit of emotion that I feel—which is telling that boy that his dad was going to come back,’ she said.

Robert “Bobby” Crimo, 21, the shooter, has been detained and is facing charges.

Shortly after 10 a.m., he started shooting from a rooftop along the parade route with an AR-15-style weapon.

Police claimed on Tuesday that Crimo effortlessly slipped through the gathering of terrified onlookers while wearing a woman’s disguise and eluded capture.

About eight hours after the incident, he was eventually taken into custody.